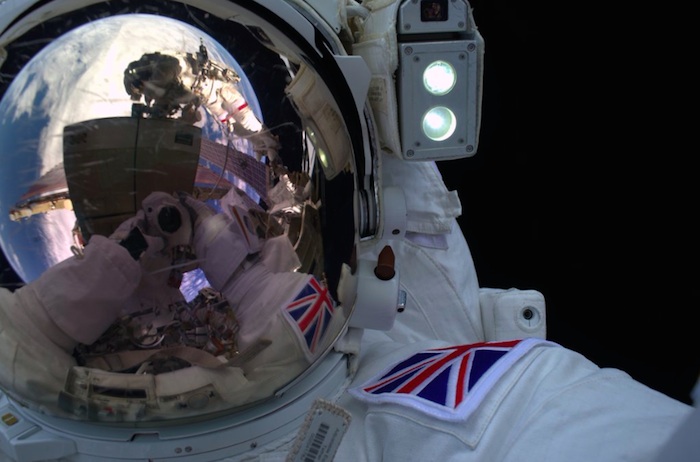 'A proud moment' for astronaut Tim Peake – but spacewalk ends early
Friday’s main task was completed successfully, but water in Tim Kopra’s helmet meant the astronauts were ordered back into the ISS, leaving work undone
The moment was hardly lost on him. As Tim Peake clambered out of the International Space Station he nodded to the union flag emblazoned on his shoulder. To wear the patch was, he said, “a huge privilege, and a proud moment”.
Britain’s first European Space Agency astronaut began his maiden spacewalk shortly before 1pm on Friday as the orbiting station soared 250 miles above Australia. By the time he returned inside, he had circled the planet at least three times and witnessed six stunning sunsets or sunrises.
Emerging from the Quest airlock into the darkness of Earth’s shadow, Peake joined Nasa’s Tim Kopra for more than four hours of challenging work. Under the direction of ground staff in Houston, the astronauts overcame snagged tethers, a brief carbon dioxide scare, and a torn glove before the day was done.
But there was one glitch the astronauts could not solve on the fly. A water leak into Kopra’s helmet forced Nasa controllers to abort the spacewalk two hours early. The men were ordered inside, having completed their main task, but leaving others undone. The incident echoed a more serious situation in July 2013 when European astronaut Luca Parmitano had a sudden rush of water leak into his helmet.
. 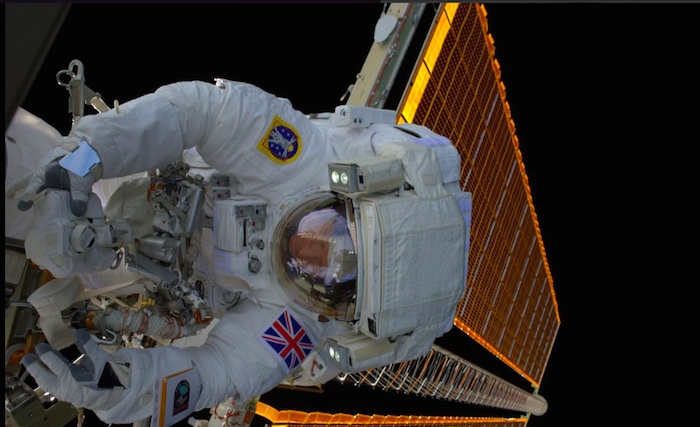 Their most crucial job was to replace a box of electronics that failed in November last year. Without it, the space station had to run without power from one of its huge solar arrays. But even getting to the faulty unit was not simple, requiring the men to climb to the far end of the space station. On the way, Peake was ordered to hold still for several minutes after he appeared to get snagged. “How are you doing?” asked Kopra at one point. “Fine. Just hanging out,” replied Peake.
Once they reached the broken power unit, Kopra and Peake had to wait until the space station flew once more into Earth’s shadow. The pause gave them time to take photos of each other and admire the scenery. In the darkness, working under the lamps on their helmets, Peake and Kopra had half an hour to replace the failed unit with a new one before the sun rose and sent high voltage electricity surging through the fresh box of electronics. The views from their helmet cameras contrasted the prosaic nature of the repair - performed with wrench and pistol-grip screwdriver - with the majestic, rolling Earth behind them.
Messages for Peake flooded in before and during the spacewalk. Sir Paul McCartney tweeted: “Good luck @astro_timpeake we’re all watching, no pressure! Wishing you a happy stroll outdoors in the universe.” The veteran Canadian astronaut, Chris Hadfield, added his own words of encouragement: “Nice day for a spacewalk. See the world for us, Tim.”
.
Angela said it was exciting for her son because not every astronaut gets to do a spacewalk, especially so early into a mission. “It’s the pinnacle of being an astronaut to do an EVA,” she said. “We are absolutely thrilled that everyone is so excited, this is a proud day.”
Peake’s wife, Rebecca, thanked him for “taking our two boys into the vacuum of space”, a nod to a photograph of their young sons that she noticed strapped to his left arm.
Peake blasted off to the International Space Station from Baikonur in Kazakhstan on 15 December. He is not due to return to Earth until June.
Perched at one end of the space station, Peake and Kopra removed and replaced the faulty power unit with ease. But as the astronauts set about their secondary tasks, Kopra noticed an abnormal carbon dioxide reading on his spacesuit, and then a minor tear in one of his gloves. The high carbon dioxide reading was blamed on a faulty sensor.
Kopra had just finished his second task, to fit a valve on another section of the space station, when he noticed a ball of water in his helmet. The apparent leak led to the swift decision by Nasa’s Royce Renfrew, in line with flight rules, to end the spacewalk and both astronauts were ordered back inside.
Safe inside the station, Kopra was found to be damp across his shoulders, with 15mls of water in his helmet. That will now be analysed for material that may reveal the source of the leak. As Kopra went to dry himself off, Scott Kelly, the station commander, helped Peake out of his spacesuit. His spacewalk might have ended early, but Peake was grinning from ear to ear.
Despite having to return early Peake said he would never forget his “exhilarating” first walk in space as he posted a space selfie of his historic feat.
His tweet, which received hundreds of retweets within minutes, was accompanied with three photos including a selfie showing his camera in the reflection of his helmet.
. 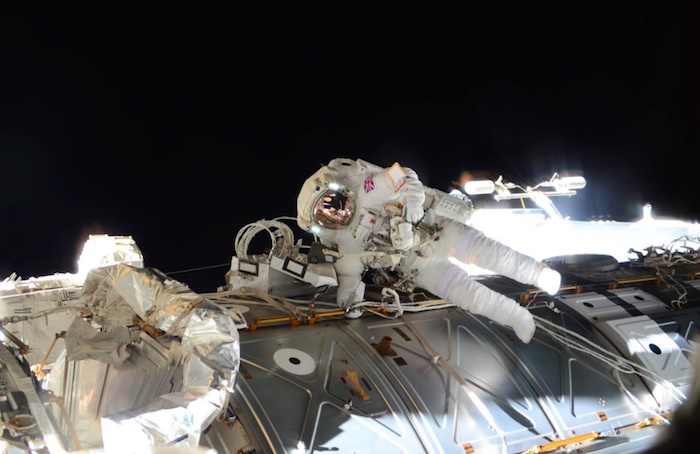