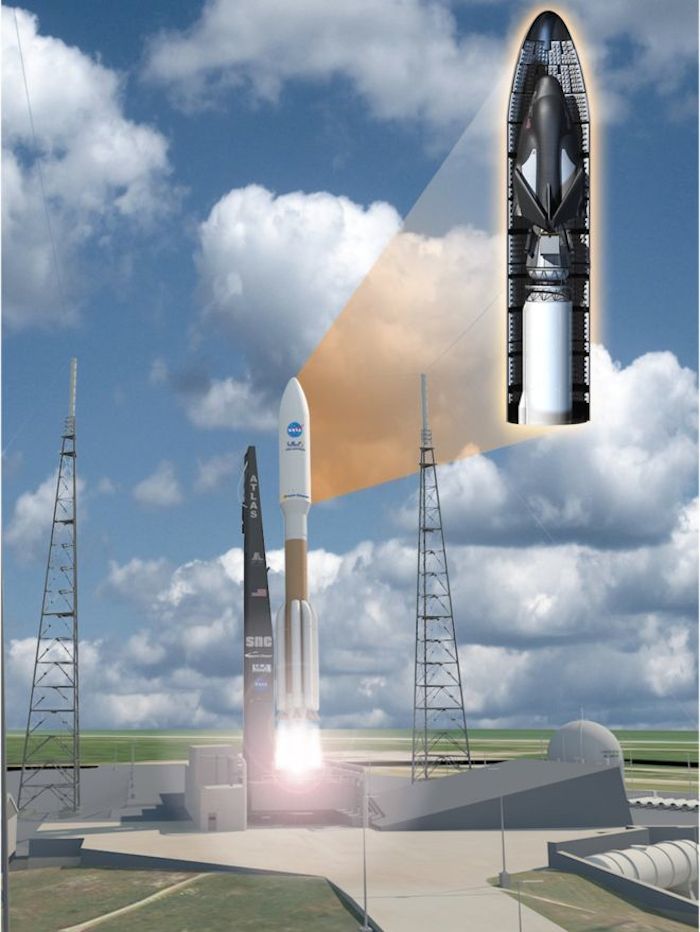 Artist's impression: Dream Chaser will have folding wings so it can launch inside rocket fairings
-
The European Space Agency (Esa) says it is excited by its US counterpart's selection of a winged vehicle to resupply the space station.
Nasa has extended contracts to existing commercial cargo carriers, Orbital ATK and SpaceX, but has added a third team: the Sierra Nevada Corporation (SNC).
This new entrant will fly an automated mini-shuttle called Dream Chaser.
Esa has agreements to co-operate with SNC, which should now lead to European companies providing components.
Chief among these contributions will be the International Berthing and Docking Mechanism (IBDM) - a new system developed in Europe to join spacecraft together.
Dream Chaser will have one at its rear to make a sealed connection to a free port on the orbiting platform.
Astronauts will move through the IBDM to access the vehicle's several tonnes of supplies.
Huge co-operation
The selection of SNC by Nasa to run at least six cargo sorties to the ISS, starting no earlier than 2019, should trigger a multi-million-euro contract between Esa and QinetiQ of Belgium.
The firm will lead a consortium in the production of the first IBDM - a prototype model that will flight-qualify the design.
This would be given to the American spacecraft operator, but all future units would have to be purchased on a commercial basis.
"This is not solely institutional funding; it's a public-private partnership," explained Thomas Reiter, Esa's director of human spaceflight and operations.
"Esa member states are investing, but so too are the companies themselves.
"They are thinking about the recurring units, and you can imagine in view of huge co-operation in future space exploration that docking mechanisms will be key elements in demand."
. 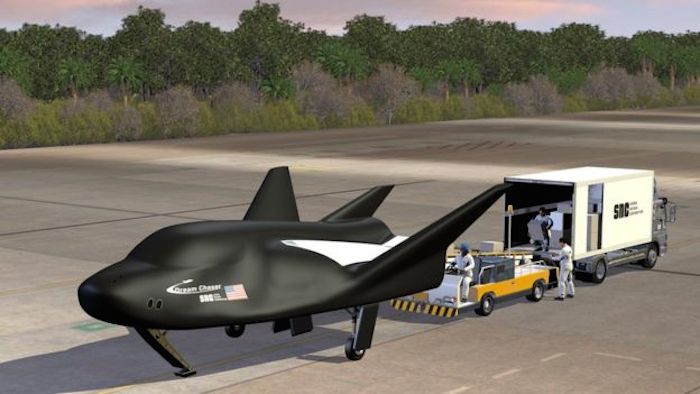 Artist's impression: Dream Chaser will use its wings to glide back to a runway
-
Esa and the German space agency (DLR) signed memoranda of understanding with SNC back in 2014, when Dream Chaser was being touted as a possible astronaut carrier.
At the time, the then head of DLR, Jan Woerner, spoke of his interest in seeing the vehicle launch on Europe's Ariane rocket.
However, he qualified his comments by stating that for this to happen, Dream Chaser would need to be modified to have folding wings. This would enable it to fit under the protective fairing on the top of Ariane. Any other configuration would require costly aerodynamic research.
Folded wings
SNC has accepted this design change for the forthcoming cargo version of the spacecraft, and Prof Woerner, now Esa's director general, has as a consequence re-stated his earlier interest.
"There is already a plan to have folded wings, like fighter planes on aircraft carriers," he told the BBC. "It's the same: you can fold them (for launch) and then unfold them later (in orbit).
"So these are the different aspects (being studied): using European technology to upgrade Dream Chaser, using the Dream Chaser for European microgravity experiments, and the third one - launching Dream Chaser from Kourou with a European launcher."
. 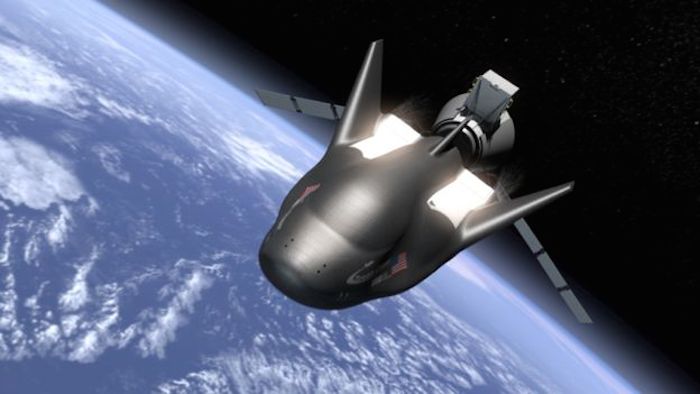 Dream Chaser is not expected to start cargo runs to the station before 2019
-
Esa has a particular interest in developing techniques to remove old or broken hardware in orbit. Dream Chaser could have a role in this, said Prof Woerner, by carrying up the robots or lasers needed to capture and dispose of the "space junk".
Nasa's selection of Dream Chaser adds a second re-usable vehicle to the fleet of ships currently ferrying cargo to the station.
The SNC vehicle will employ its wings to glide back to a runway, most probably at the Kennedy Space Center in Florida.
With little servicing, it should then be possible to put it back on top of a rocket to fly again.
SpaceX's Dragon capsule also has a re-use capability, but at the moment Nasa insists on flying a brand new ship on every mission.
Quelle: BBC
Raumfahrt
« Zum vorherigen Eintrag Zum nächsten Eintrag »
2599 Views
Created with page4