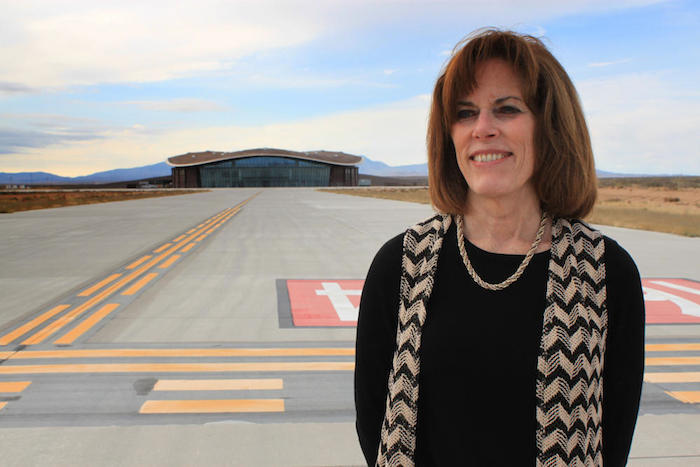 This Dec. 9, 2014, file photo shows Christine Anderson, executive director of the New Mexico Spaceport Authority, posing for a photo at the end of the taxiway at Spaceport America in Upham, N.M. (AP Photo/Susan Montoya Bryan,File)

UPHAM, N.M. — The head of the New Mexico Spaceport Authority says Spaceport America is moving ahead and its anchor tenant could be launching commercial space flights as soon as the 2018 fiscal year.
Spaceport executive director Christine Anderson says she optimistic about the commercial space industry and the role New Mexico’s taxpayer-financed spaceport will have as the industry grows.
In an editorial, Anderson says the spaceport expects to earn about $4 million in fiscal year 2017. But that’s not enough to pay for construction, equipment and other things that were previously covered by bonds.
She plans to ask the Legislature for $2.8 million, saying fiscal year 2017 will be a bridge year since Virgin Galactic’s rent will go up in 2018 from $1 million a year to about $3 million.
Quelle: Albuquerque Journal
Raumfahrt
« Zum vorherigen Eintrag Zum nächsten Eintrag »
2341 Views
Created with page4