Every rover we have sent to explore other planets has had the same basic “lab-on-wheels” design, with the exception of the adorable skiing Prop M robots of the Soviet space program.
But despite the ubiquity of these automotive rovers, there’s no reason that future robotic explorers should be tied to these models when there are potentially dozens of other ways to cover ground on extraterrestrial worlds.
Like, for instance, taking a page out of the invertebrate handbook by slithering around in an amoeba-like blob sack. It must be a pretty solid idea (pun intended) because NASA was granted a patent for it this week. The new wormlike rover concept, dubbed the “amorphous surface robot,” is an attempt to overcome some of the difficulties experienced by traditional rovers, which are large, heavy, and vulnerable to the harsh conditions of other planets.
“Once deployed on a surface, conventional rovers are typically propelled along a surface,” according to the patent summary. “In particularly sandy or loamy soil environments such as the lunar or Martian surfaces, conventional propulsion devices may become fouled and stuck.”
Amorphous robots have the potential to overcome some of these problems, plus they could handle some of the sketchier terrain that would pose a significant risk to traditional rovers. “The presently disclosed robots change shape in the direction of intended travel to provide improved surface mobility along with enhanced protection from the elements,” the summary claims.
This blobby rover could exploit a few different methods for locomotion, outlined in the patent, and on the project homepage. One technique is to outfit the robot with valves for channeling liquids in whatever direction mission leads want it to head, creating a kind of slosh-based momentum.
. 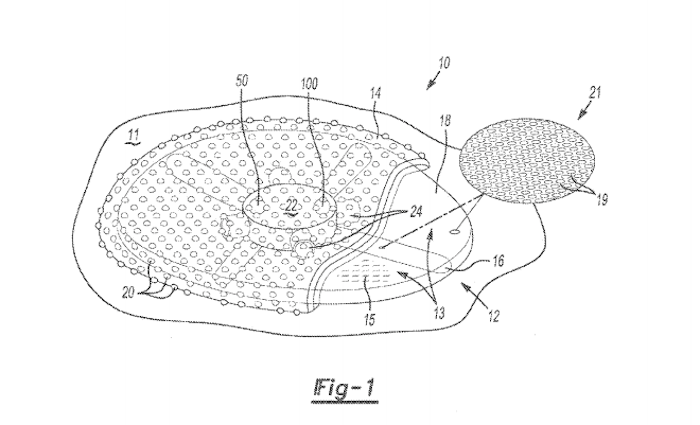 A schematic partial cut-away perspective of fluid-filled compartmentalized bladder and an enclosed valve assembly. Image: NASA/United States Patent and Trademark Office
Another is to generate motion with electromagnets, while a third concept suggests the use of a flexible sac or cell that can expand and deflate, causing the robot to roll along an alien surface.
There’s a lot of potential here to explore regions on the Moon, Mars, and other interplanetary targets that conventional rovers can’t reach, such as small crannies, steep hillsides, or cliff faces.
But there are also applications for these amorphous robots on Earth. The enhanced maneuverability and lack of size constraints for these wormy models make them useful for search and rescue operations, or inspecting constricted industrial spaces like oil pipelines.
Traditional rovers like the Curiosity on Mars or the Yutu on the Moon have defined planetary exploration for the past half-century, and remain powerful symbols of our off-Earth reach. But future explorers may resemble blobfish, worms, ants, or even locust swarms more than the remote-controlled cars that made the first inroads on other worlds.
Quelle:Motherboard
Raumfahrt
« Zum vorherigen Eintrag Zum nächsten Eintrag »
2558 Views
Created with page4