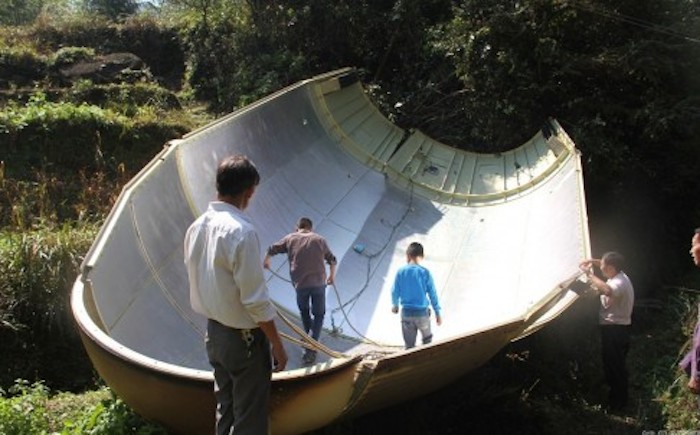 Farmers inspect the piece of metal that broke off a satellite and fell into their fields in Yuanxi village in Jiangxi province. Photos: SCMP Pictures
-
Villagers in southeastern China awoke this weekend to find a metal chunk from a satellite had narrowly missed their homes as it fell to earth,  slamming instead into a nearby hillside, state media reported.
The piece, measuring about 10.3 metres long and 4.5 metres across, had broken off the APSTAR-9 satellite, which was carried into space by a rocket blasting off from Xichang in Sichuan province shortly after midnight on Saturday.
. 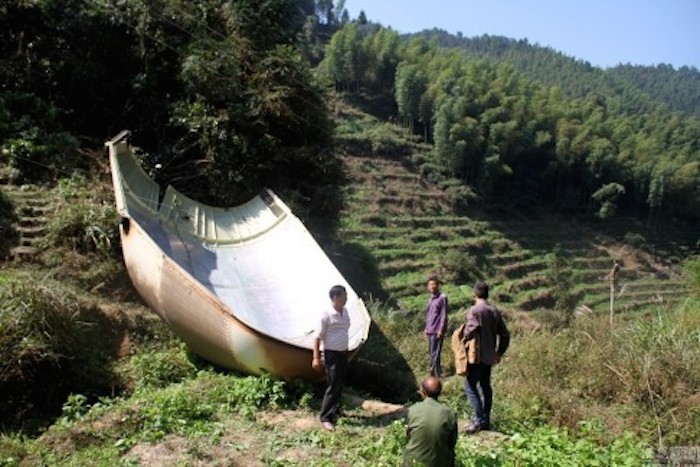 The debris was part of the radome, which protects the satellite's antenna. It wasn't clear what broke it loose from the APSTAR-9 satellite, deployed early Saturday.
-
It wasn't clear what happened during the deployment of the communication satellite that sheared off a portion of its radome, the protective enclosure for the radar antenna. But the report carried on the website of People's Daily called the launch a success.
Residents of Yuanxi village in the southeastern province of Jiangxi might take a slightly different view. They found the gleaming white sheet of metal on a hillside not far from their residences.
The debris had severed the electricity supply in the area but otherwise had not caused any damage.
The APSTAR-9 satellite was provided by the China Aerospace Science and Technology Corporation.
Quelle: South China Morning Post
Raumfahrt
« Zum vorherigen Eintrag Zum nächsten Eintrag »
2333 Views
Created with page4