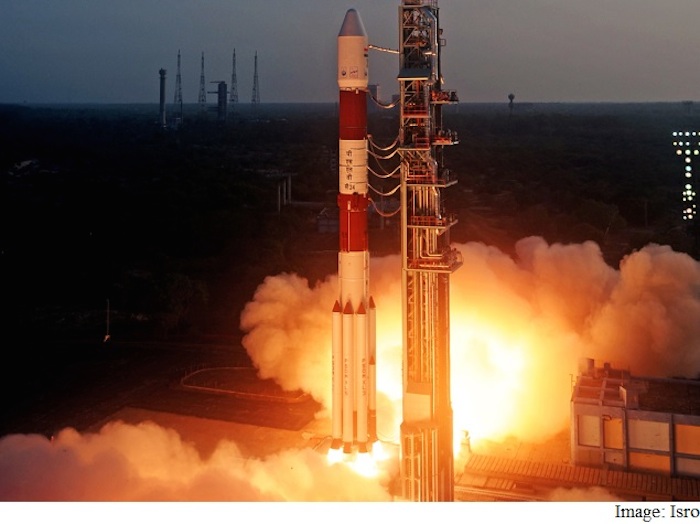 India will launch six satellites from Singapore, including a dedicated 500kg earth observation spacecraft, in mid-December, a top space official said on Friday.
"The 500kg dedicated satellite (TeLOS-1) will be a commercial launch for Singapore Technologies Electronics Ltd while five other smaller satellites are from Singapore universities," Indian space agency's commercial arm Antrix Corporation Chairman and Managing Director V.S. Hegde told IANS in Bengaluru.
The polar satellite launch vehicle (PSLV), the most reliable workhorse and trusted rocket of the Indian Space Research and Organisation (Isro), will deploy the satellites into a near equatorial orbit, inclined 15 degrees lower to the south of equator.
"As Singapore has a cloudy weather most of the year, the observatory satellite will be put in a sun-synchronous polar orbit 550km above the earth so that it could transmit signals round-the-clock, cloud disturbances notwithstanding," Hegde said on the margins of a defence and aerospace seminar.
According to the company subsidiary, (Satcom & Sensor Systems Pte Ltd), its first commercial satellite will carry an electro-optical camera capable of taking images at ground resolution of one metre.
"The observatory spacecraft will be used disaster and environment monitoring, maritime safety, urban planning and homeland security," Hegde noted.
The remote sensing satellite's positioning in the unique near equatorial orbit also allows its frequent revisits to areas of interest in equatorial regions at 96-minute intervals, delivering high data availability and responsiveness.
India will also launch another 900kg dedicated communication satellite (Aisat) for the German space agency (GLR) in 2016 from its spaceport at Sriharikota in Andhra Pradesh.
"Of the 23 satellites we have commercially contracted for launches in the earth's lower orbit from nine developed and developing countries, 21 smaller, micro and nano type are from Algeria, Canada, Indonesia, Japan and the US for communication, remote sensing, observational activities," Hegde added.
With demand for launching 1,500 satellites for various space and science applications from countries the world over, India is ramping up its capacity to launch as many of them, in view of its cost competitiveness and record expertise in sending them in lower orbits using PSLV over the decades.
Earlier, Hegde addressed a gathering of about 300 scientists, engineers, technologists and students of aeronautics at a seminar on "Developing and sustaining a vibrant R&D for aerospace and defence sector', organised in memory of late former president A.P.J. Abdul Kalam in Bengaluru by the Society of Indian Aerospace Technologies and Industries.
Quelle: NDTV
Raumfahrt
« Zum vorherigen Eintrag Zum nächsten Eintrag »
2231 Views
Created with page4