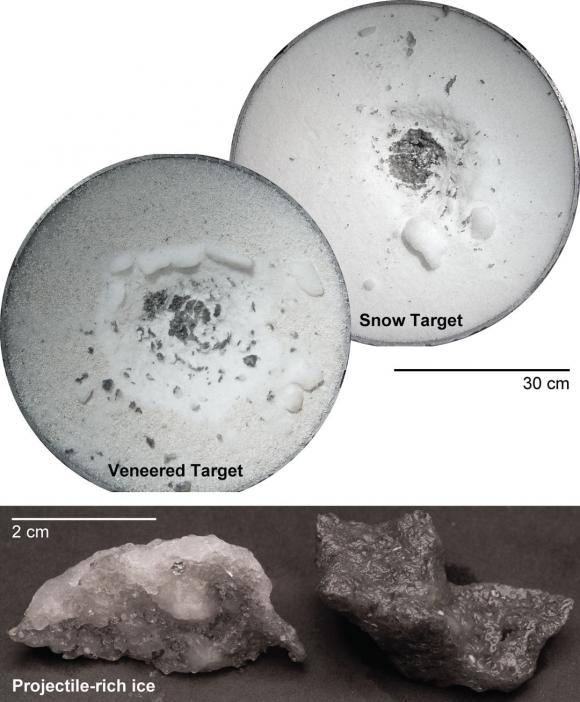 Cosmic flypaper
Experiments using a high velocity cannon suggest that when asteroids hit targets that are icy or made of porous silicate materials, much of the impact material stays in the crater. The findings have implications for the surface composition of the dwarf planet Ceres.
Image: NASA Ames Research Center
-
Ceres, the largest object in the asteroid belt and closest dwarf planet to Earth, had been remarkable for its plain surface. New research suggests that most of the material that has struck Ceres in high-speed collisions has stuck — billions of years worth of meteorite material.
PROVIDENCE, R.I. [Brown University] — A new set of high-velocity impact experiments suggests that the dwarf planet Ceres may be something of a cosmic dartboard: Projectiles that slam into it tend to stick.
The experiments, performed using the Vertical Gun Range at NASA’s Ames Research Center, suggest that when asteroids and other impactors hit Ceres, much of the impact material remains on the surface instead of bouncing off into space. The findings suggest the surface of Ceres could consist largely of a mish-mash of meteoritic material collected over billions of years of bombardment.
The research, by Terik Daly and Peter Schultz of Brown University, is published in Geophysical Research Letters .
Ceres is the largest object in the asteroid belt and the nearest dwarf planet to Earth. Until the recent arrival of the Dawn spacecraft, all that was known about Ceres came from telescopic observations. The observations showed Ceres to be mysteriously low in density, suggesting it is made either of very porous silicate material, or perhaps contains a large layer of water ice. Observations of its surface were remarkable as well — largely for being unremarkable.
“It’s really bland in the telescopic observations,” said Daly, a Ph.D. student at Brown and the study’s lead author. “It’s like someone took a single color of spray paint and sprayed the whole thing. When we think about what might have caused this homogeneous surface, our thoughts turn to impact processes.”
And to understand impact processes, the researchers turned to NASA’s Vertical Gun Range, a cannon with a 14-foot barrel that can launch projectiles at up to 16,000 miles per hour. For this work, Daly and Schultz wanted to simulate impacts into low-density surfaces that mimic the two broad possibilities for the composition of Ceres’s surface: porous silicate or icy.
“The idea was to look at those two end-member cases, because we really don’t know yet exactly what Ceres is like,” Daly said.
For the porous silicate case, the researchers launched impactors into a powdered pumice. For the icy case, they used two targets: snow, and snow covered by a thin veneer of fluffy silicate material, simulating the possibility the Ceres’s ice sits below a silicate layer. They then blasted these targets with pebble-sized bits of basalt and aluminum, simulating both stony and metallic meteorites.
The study showed that in all cases, large proportions of the impact material remained in and around the impact crater. This was especially true in the icy case, Daly said.
“We show that when you have a vertical impact into snow — an analog for the porous ice we think might be just beneath the surface of Ceres — you can have about 77 percent of the impactor’s mass stay in or near the crater.”
The results were a bit of a surprise, said Schultz, who has studied impact processes for many years as professor of earth, environmental, and planetary sciences at Brown.
“This is really contrary to previous estimates for small bodies,” Schultz said. “The thought was that you’d eject more material that you’d collect, but we show you can really deliver a ton of material.”
The impact speeds used in the experiments were similar to speeds thought to be common in asteroid belt collisions. The findings suggest that a majority of impacts on porous bodies like Ceres cause an accumulation of impact material on the surface.
“People have thought that perhaps if an impact was unusually slow, then you could deliver this much material,” Schultz said. “But what we’re saying is that for a typical, average-speed impact in the asteroid belt, you’re delivering a ton of material.”
Over billions of years of such impacts, Ceres may have accumulated quite a bit of non-native material, Daly and Schultz said, much of it mixing together to create the relatively nondescript surface seen from telescopes. The researchers are hopeful that as the Dawn spacecraft scans the surface at much higher resolution, it might be able to pick out individual patches of this delivered material. That would help confirm the relevance of these experiments to celestial bodies, the researchers say.
The results have implications for missions that aim to return asteroid samples to Earth. Unless the landing sites are carefully chosen, the researchers say, those missions could end up with samples that aren’t representative of the object’s original material. To get that, it might be necessary to find an area where there has been a relatively recent impact.
“You can’t do this like the old claw crane from the arcade,” Schultz said. “You can’t just reach down and grab whatever’s there. You may need to find a fresh impact where perhaps the native stuff has been churned up.”
Quelle: Brown University
Astronomie
« Zum vorherigen Eintrag Zum nächsten Eintrag »
2488 Views
Created with page4