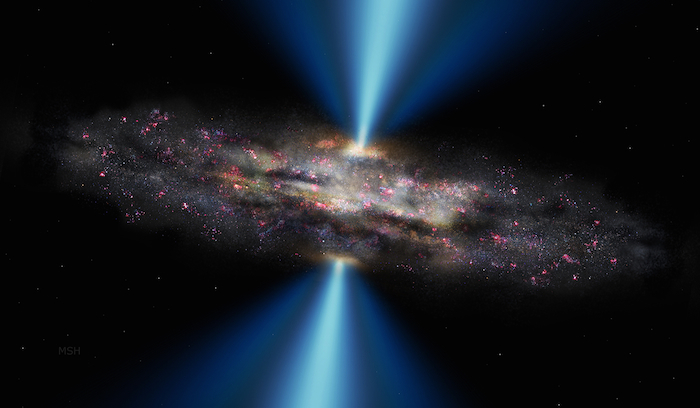 In this illustration a black hole emits part of the accreted matter in the form of energetic radiation (blue), without slowing down star formation within the host galaxy (purple regions).
.
Maunakea, Hawaii – An international team of astrophysicists led by Benny Trakhtenbrot, a researcher at ETH Zurich’s Institute for Astronomy, discovered a gigantic black hole in an otherwise normal galaxy, using W. M. Keck Observatory’s 10-meter, Keck I telescope in Hawaii. The team, conducting a fairly routine hunt for ancient, massive black holes, was surprised to find one with a mass of more than 7 billion times our Sun making it among the most massive black holes ever discovered. And because the galaxy it was discovered in was fairly typical in size, the study calls into question previous assumptions on the development of galaxies. Their findings are being published today in the journal Science.
The data, collected with Keck Observatory’s newest instrument called MOSFIRE, revealed a giant black hole in a galaxy called CID-947 that was 11 billion light years away. The incredible sensitivity of MOSFIRE coupled to the world’s largest optical/infrared telescope meant the scientists were able to observe and characterize this black hole as it was when the Universe was less than two billion years old, just 14 percent of its current age (almost 14 billion years have passed since the Big Bang).
Even more surprising than the black hole’s record mass, was the relatively ordinary mass of the galaxy that contained it.
Most galaxies host black holes with with masses less than one percent of the galaxy. In CID-947, the black hole mass is 10 percent that of its host galaxy. Because of this remarkable disparity, the team deduced this black hole grew so quickly the host galaxy was not able to keep pace, calling into question previous thinking on the co-evolution of galaxies and their central black holes.
“The measurements of CID-947 correspond to the mass of a typical galaxy,” Trakhtenbrot said. “We therefore have a gigantic black hole within a normal size galaxy. The result was so surprising, two of the astronomers had to verify the galaxy mass independently. Both came to the same conclusion.”
“Black holes are objects that possess such a strong gravitational force that nothing – not even light – can escape,” said Professor Meg Urry of Yale University, co-author of the study. ”Einstein’s theory of relativity describes how they bend space-time itself. The existence of black holes can be proven because matter is greatly accelerated by the gravitational force and thus emits particularly high-energy radiation.”
Until now, observations have indicated that the greater the number of stars present in the host galaxy, the bigger the black hole. “This is true for the local Universe, which merely reflects the situation in the Universe’s recent past,” Urry said.
Furthermore, previous studies suggest the radiation emitted during the growth of the black hole controlled, or even stopped, the creation of stars as the released energy heated up the gas. This cumulative evidence led scientists to assume the growth of black holes and the formation of stars go hand-in-hand.
The latest results, however, suggest that these processes work differently, at least in the early Universe.
The distant young black hole observed by Trakhtenbrot, Urry and their colleagues had roughly 10 times less mass than its galaxy. In today’s local Universe, black holes typically reach a mass of 0.2 to 0.5 percent of their host galaxy’s mass. “That means this black hole grew much more efficiently than its galaxy – contradicting the models that predicted a hand-in-hand development,” he said.
The researchers also concluded stars were still forming even though the black hole had reached the end of its growth. Contrary to previous assumptions, the energy and gas flow propelled by the black hole did not stop the creation of stars.
"From the available Chandra data for the source, we also concluded that the black hole has a very low accretion rate, and is therefore reached the end of its growth. On the other had, other data suggests that stars were still forming throughout the host galaxy," Trakhtenbrot said.
The galaxy could continue to grow in the future, but the relationship between the mass of the black hole and that of the stars would remain unusually large. The researchers believe CID-947 could be a precursor of the most extreme, massive systems that we observe in today’s local Universe, such as the galaxy NGC 1277 in the constellation of Perseus, some 220 million light years away from our Milky Way.
The W. M. Keck Observatory operates the largest, most scientifically productive telescopes on Earth. The two, 10-meter optical/infrared telescopes near the summit of Mauna Kea on the Island of Hawaii feature a suite of advanced instruments including imagers, multi-object spectrographs, high-resolution spectrographs, integral-field spectrographs and world-leading laser guide star adaptive optics systems.
MOSFIRE (Multi-Object Spectrograph for Infrared Exploration) is a highly-efficient instrument that can take images or up to 46 simultaneous spectra. Using a sensitive state-of-the-art detector and electronics system, MOSFIRE obtains observations fainter than any other near infrared spectrograph. MOSFIRE is an excellent tool for studying complex star or galaxy fields, including distant galaxies in the early Universe, as well as star clusters in our own Galaxy. MOSFIRE was made possible by funding provided by the National Science Foundation and astronomy benefactors Gordon and Betty Moore.
Keck Observatory is a private 501(c) 3 non-profit organization and a scientific partnership of the California Institute of Technology, the University of California and NASA.
Quelle: W. M. Keck Observatory
Astronomie
« Zum vorherigen Eintrag Zum nächsten Eintrag »
2520 Views
Created with page4