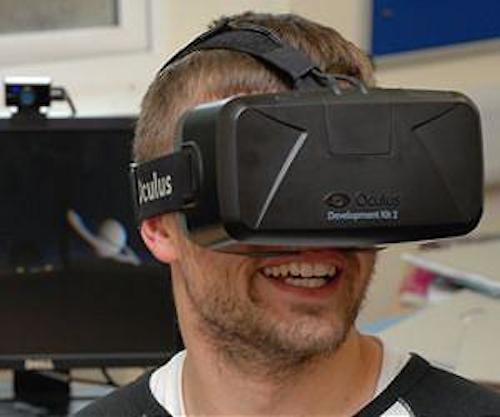 Edinburgh astronomers have combined the new Oculus Rift virtual reality headset with Stellarium planetarium software to produce an exciting and immersive way to explore the sky. The system was demonstrated live at the National Astronomy Meeting at Venue Cymru in Llandudno, Wales, but soon will be available as a shared group experience to anyone who has a headset and an Internet connection. The technology offers the chance to engage new audiences with the night sky.
"I have always loved showing the stars to people" said astronomer Alastair Bruce, the leader of the project, provisionally named StarSightVR, "but now I can guarantee perfect cloudless skies, and show the universe to people all round the world, while they stay in the comfort of their own homes."
'Some people are also simply unable to come to places like the Royal Observatory or to travel to dark skies, so this technology could help them enjoy astronomy in a way that until now wasn't possible."
The Oculus Rift virtual reality headset has created a huge stir. Thousands of people are testing out the prototype, Facebook have already bought the company, and the headsets should go on sale early in 2016. The buzz so far has mostly been about what it will do for three dimensional immersive gaming, but Bruce, a PhD student at the University of Edinburgh, and a keen gamer himself, saw the potential for public interest in astronomy.
"I decided the way ahead was to combine the headset with Stellarium, because that software is very popular as well as really good, and what's more it's open source, which means we could get the benefit to the maximum number of people."
Alastair got together with his supervisor, Prof Andy Lawrence, and they applied for a small grant from the Science and Technology Facilities Council (STFC), which allowed them to buy test equipment, and pay for a software engineer (Guillaume Chereau) to make the necessary changes to the Stellarium software.
"It worked beautifully" said Andy Lawrence. "We showed off an early version to people at the Edinburgh International Science Festival in April, and it just knocked their socks off. You feel like you are really outside looking at the starry sky, but it's even better. You can see fainter stars, speed up the rotation of Earth, look at deep sky objects, and even take the ground away so you feel like you are seeing the stars from space."
The team will very soon release their new best test open source variety of Stellarium. This means that anybody with an Oculus Rift headset will be able to download the new software and try it out for themselves. But the team see this as just the start. "We have a clear idea of the next steps in development - the things we want to add or make better before an official release - but unfortunately we have now run out of money", said Lawrence.
As well as releasing the new software, and adding features to the code, what Bruce and Lawrence want to do next is to use the system to run presenter-led group stargazing sessions live over the Internet. "We love showing people the stars and explaining what they are looking at, here on the rooftop at the Royal Observatory", said Bruce, "so we thought, why not use the Oculus Rift to do that remotely?"
The team built changes into Stellarium so that their central version could act as a master, sending information to remote versions. The idea is that each user switches their copy of Stellarium to 'join show' mode, and listens to the astronomer-presenter over an audio link, while the presenter points where they need to look, adjusts day/night settings, switches constellation guiding lines on and off, and so on.
"Ideally we would run a StarSightVR show perhaps once a month", said Lawrence, "but we don't know yet how popular it would be, or how well it will scale up. Our plan is to run a trial event or two and see how we go."
Tania Johnston, STFC Public Engagement manager at the observatory, added: "The new StarSightVR system has enormous potential. STFC is committed to diversity and inclusion, but I often deal with people who have conditions that limit their involvement with our work. So giving them access to such an incredible virtual reality astronomy experience - over the internet - could overcome some of those most fundamental barriers.
The trial shows will be run through the Royal Observatory Edinburgh Trust, a charitable organisation that supports heritage and public interest in astronomy.
Quelle: SD
Astronomie
« Zum vorherigen Eintrag Zum nächsten Eintrag »
2370 Views
Created with page4