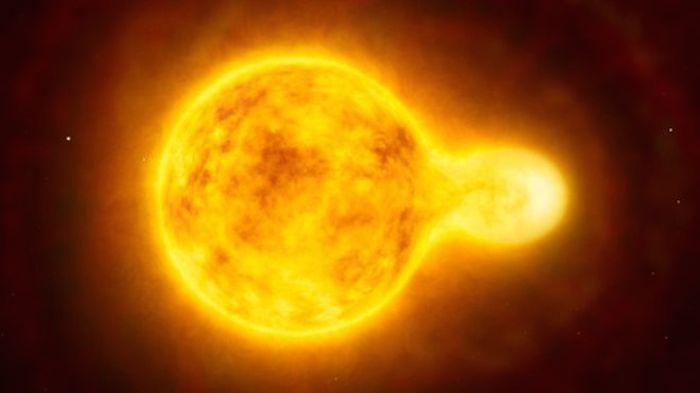 One of the pairs of stars is a so-called contact binary
.
Astronomers have discovered a very rare system of five connected stars.
The quintuplet consists of a pair of closely linked stars - binaries - one of which has a lone companion; it is the first known system of its kind.
The pair of stars orbit around a mutual centre of gravity, but are separated by more than the distance of Pluto's orbit around the Sun.
The findings have been presented at the UK National Astronomy Meeting in Llandudno.
The unusual system lies 250 light-years away in the constellation Ursa Major. It was discovered in data gathered by the SuperWASP (Wide Angle Search for Planets) project.
This uses relatively small and low-cost cameras in the Canary Islands and South Africa to image much of the sky every few minutes.
Measurements of the brightness of individual stars are, over years, assembled into light curves - plots of brightness against time.
When the stars pass in front of one another, they produce a regular pattern of pairs of dips in the light curve.
Data from the new system revealed the existence of two binary stars, one of which was a so-called contact binary.
. 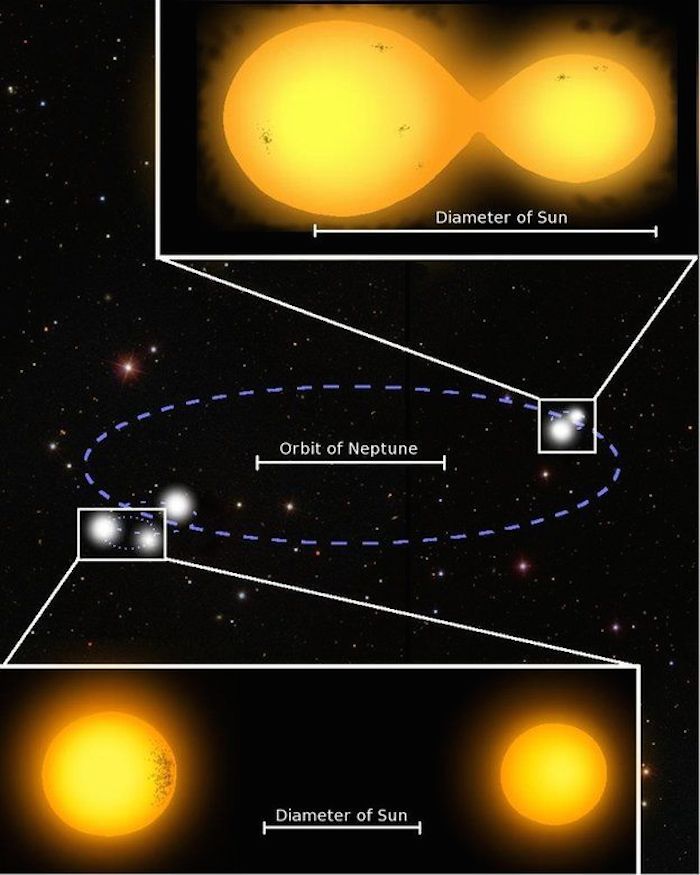 The system - dubbed 1SWASP J093010.78+533859.5 - is extremely unusual
.
Co-author Dr Markus Lohr, from the Open University, told BBC News that these contact binaries were stars that orbit so closely they share an outer atmosphere.
The other star pair - a detached binary - has a separation distance of some three million km. The two binaries orbit in the same plane at a distance of 21 billion km.
Follow-up observations of different wavelengths of light coming from the star system uncovered a fifth star, which is linked to the detached binary star.
"This is a truly exotic star system. In principle there's no reason why it couldn't have planets in orbit around each of the pairs of stars. Any inhabitants would have a sky that would put the makers of Star Wars to shame," Dr Lohr said.
"There could sometimes be no fewer than five Suns of different brightnesses lighting up the landscape."
Dr Lohr said the fact the stars all orbited in the same plane suggested they had all formed out of the same "proto-stellar disk" of dust and gas.
He added that systems containing this many linked stars were extremely rare, but at least one other five-star system had been discovered by Nasa's Kepler planet-hunting telescope.
Quelle: BBC-News
Astronomie
« Zum vorherigen Eintrag Zum nächsten Eintrag »
2657 Views
Created with page4