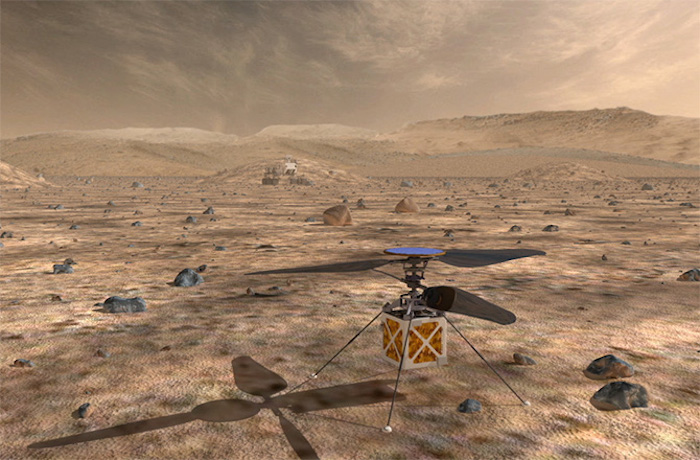 Drones are taking over Earth — will they soon invade Mars? If a new NASA project gains momentum, remote-controlled drone exploration of the red planet could soon become a thing.
Currently, the robotic exploration of Mars is pretty much one-dimensional. We have rovers that rove, landers that land and orbiters that, well, orbit. What if we had a lander or rover that could also launch its own mini-helicopter drone to better survey its surroundings? With this capability we could possibly accelerate Mars science and also safeguard invaluable assets on the Martian surface.
To this end, NASA Jet Propulsion Laboratory scientists are testing the “Mars Helicopter” that will be designed to buzz over the Martian regolith as the ‘eye in the sky’ for its roving counterpart. The small, boxy automated chopper will overcome the Martian thin atmosphere and soar over obstacles to help the rover seek out optimized routes and features of scientific interest.
To gain traction in an atmosphere that is 100 times thinner than Earth’s, the Mars Helicopter will be designed to spin its rotor much faster to provide substantial lift. It will be solar powered and, currently, NASA engineers see it operating for a “few minutes a day”, vastly improving the scope of future surface missions.
Currently, NASA uses its Mars Reconnaissance Orbiter to image the surroundings of its roving assets — Opportunity and Curiosity — so places of scientific interest can be scoped and tricky terrain identified. But to have a low-flying scout that can take preliminary imagery ahead of a future roving mission would be a wonderful asset.
Taking this idea one step further, a ‘swarm’ of these cheap, automated drones could be scattered across Mars, gathering rudimentary geological and meteorological data over a wide region. Should a few get damaged or lost, their role can be taken over by another member of the robotic swarm. Swarm technology and artificial intelligence in robotics are advancing fast, so it’s not a stretch to think that, in a decade or so, such a mission would be possible.
Quelle: D-News
Mars-Chroniken
« Zum vorherigen Eintrag Zum nächsten Eintrag »
3089 Views
Created with page4