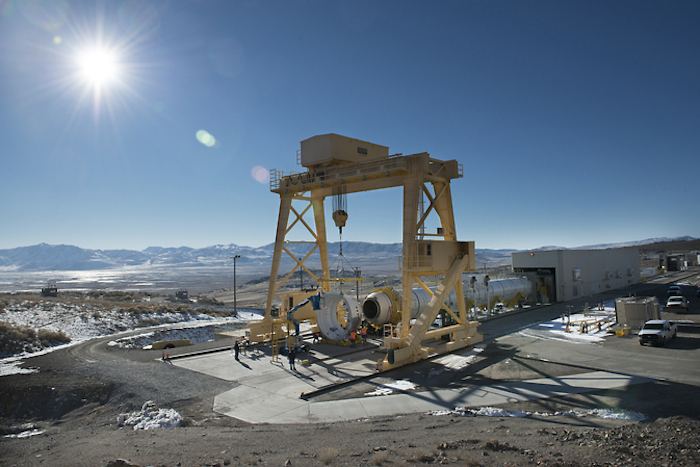 Space Launch System Booster Aimed and Ready to Fire
A full-scale version of the booster for NASA's new rocket, the Space Launch System, is ready to fire for a major ground test and is paving the way on NASA’s journey to Mars.
-
he first qualification motor for NASA's Space Launch System's booster is installed in ATK's test stand in Utah and is ready for a March 11 static-fire test.
Image Credit: ATK
-
When completed, two five-segment boosters and four RS-25 engines will power the SLS to orbit and enable astronauts to explore destinations in deep space, including an asteroid and the Red Planet.
The two-minute, full-duration static test -- scheduled for March 11 at booster prime contractor ATK's test facility in Promontory, Utah -- is a huge milestone for the program and will qualify the booster design for high temperature conditions. This type of test typically only comes after multiple years of development and signifies major progress being made on the rocket. Once this test and a second, low-temperature test planned for early 2016 are complete, the hardware is qualified and ready for the first flight of SLS.
"With RS-25 engine testing underway, and this qualification booster firing coming up, we are taking big steps toward building this rocket and fulfilling NASA's mission of Mars and beyond," said SLS Program Manager Todd May. "This is the most advanced propulsion system ever built and will power this rocket to places we've never reached in the history of human spaceflight."
Some 103 design objectives will be measured through more than 534 instrumentation channels on the booster. It will be heated to 90 degrees Fahrenheit to measure solid rocket booster performance at high temperatures, as well as to demonstrate that it meets applicable structural and ballistic requirements.
Other objectives include data gathering on vital motor upgrades, such as the new insulation and booster case liner and the redesigned nozzle, which increases the robustness of the design. The improvements we've made to the SLS boosters, like new insulation materials, will make them more environmentally friendly, safe and affordable," said Bruce Tiller, deputy manager of the SLS Boosters Office at NASA's Marshall Space Flight Center in Huntsville, Alabama. Marshall manages the SLS Program for the agency.
So, What's a Booster?
Solid rocket boosters operate in parallel with the main engines for the first two minutes of flight to provide the thrust needed for the launch vehicle to escape the gravitational pull of the Earth.
The SLS boosters will be used for the first two, 70-metric-ton flights of the SLS. One SLS booster is approximately 177 feet long, 12 feet in diameter and weighs 801 tons. Each booster produces 3.6 million pounds of thrust.
The boosters also will have an avionics system that is made up of hardware, software and operating systems that will communicate with the SLS avionics system and ground operations. The avionics also will control booster operations, like motor firing and nozzle steering.
Proven hardware from the space shuttle era will be used for the SLS boosters, but modified for SLS requirements. While the shuttle used two, four-segment boosters, SLS will be powered by two, five-segment boosters. The added booster segment contains more solid propellant that allows SLS to lift more weight and reach a higher altitude before the boosters separate from the core stage. The core stage, towering more than 200 feet tall with a diameter of 27.6 feet, will store cryogenic liquid hydrogen and liquid oxygen that will feed the vehicle’s RS-25 engines.
Booster hardware and software is developed, built and tested by prime contractor ATK. NASA and ATK have successfully completed three, full-scale development test firings of the five-segment booster ahead of the upcoming qualification test.
"What's impressive about this test is when ignited, the booster will be operating at about 3.6 million pounds of thrust, or 22 million horsepower," said Alex Priskos, manager of the SLS Boosters Office at Marshall. "This test firing is critical to enable validation of our design."
The first flight test of the SLS will feature a configuration for a 70-metric-ton (77-ton) lift capacity and carry an uncrewed Orion spacecraft beyond low-Earth orbit to test the performance of the integrated system. As the SLS evolves, it will provide an unprecedented lift capability of 130 metric tons (143 tons) to enable missions even farther into our solar system.
Quelle: NASA
Raumfahrt
« Zum vorherigen Eintrag Zum nächsten Eintrag »
2842 Views
Created with page4