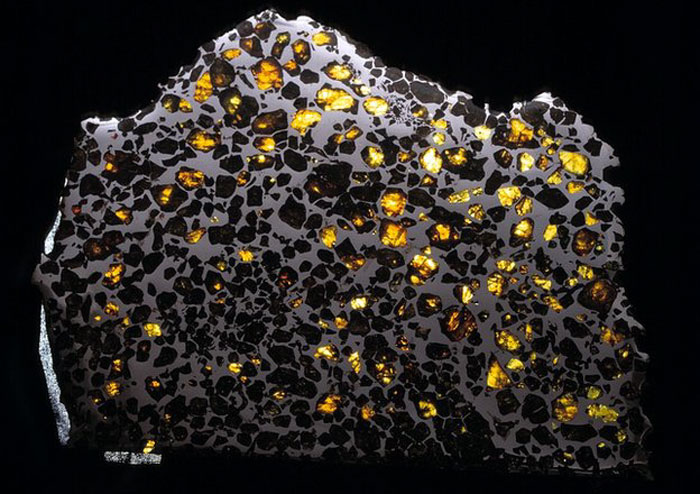 Meteorite is 'hard drive' from space

The Esquel meteorite consists of gem-quality crystals embedded in metal.
Researchers have decoded ancient recordings from fragments of an asteroid dating back billions of years to the start of the Solar System.
They found tiny "space magnets" in meteorites which retain a memory of the birth and death of the asteroid's core.
Like the data recorded on the surface of a computer hard drive, the magnetic signals written in the space rock reveal how Earth's own metallic core and magnetic field may one day die.
The work appears in Nature journal.
Using a giant X-ray microscope, called a synchrotron, the team was able to read the signals that formed more than four-and-a-half billion years ago, soon after the birth of the Solar System.
It's like a cosmic archaeological mission”
Dr James Bryson
University of Cambridge
The meteorites are pieces of a parent asteroid that originally came from asteroid belt, between Mars and Jupiter.
They represents the left-over fragments of a planet that failed to form. The magnetic recording within it traps a signal of the precise moments when an iron-rich core formed in the asteroid as well as when it froze, killing its magnetic field.
The new picture of metallic core solidification in the asteroid provide clues about the magnetic field and iron-rich core of Earth.
Core values
"Ideas about how the Earth's core evolved through [our planet's] history are really changing at the moment," lead researcher Dr Richard Harrison, from the University of Cambridge, told BBC News.
"We believe that Earth's magnetic field is linked to core solidification. Earth's solid inner core may have started to form at very interesting time in terms of the evolution of life on Earth.
"By studying an asteroid we get to see this in fast forward. We can see the start of core solidification in the magnetic records as well as its end, and start to think about how these processes work on Earth."
-
The Earth's magnetic field will likely die off when the core completely freezes
The meteorites studied by the team originally fell to Earth in Argentina, and are composed of gem-quality crystals enclosed in a metallic matrix of iron and nickel.
Tiny particles, smaller than one thousandth the width of a human hair, trapped within the metal have retained the magnetic signature of the parent asteroid from its birth in the early Solar System.
"We're taking ancient magnetic field measurements in nano-scale materials to the highest ever resolution in order to piece together the magnetic history of asteroids - it's like a cosmic archaeological mission," said Dr James Bryson, the paper's lead author.
"Since asteroids are much smaller than Earth, they cooled much more quickly, so these processes occur on a shorter timescales, enabling us to study the whole process of core solidification."
Don't panic
Prof Wyn William, from the University of Edinburgh, who was not involved in the study, commented: "To be able to get a time stamp on these recordings, to get a cooling rate and the time of solidification, is fantastic. It's a very nice piece of work."
The key to the long-lived stability of the recording is the atomic-scale structure of the iron-nickel particles that grew slowly in the asteroid core and survived in the meteorites.
Scientists have attempted to synthesise the same iron-nickel structures in the lab, without widespread success so far. But their remarkable magnetic properties rival those of rare earth magnets, a key component of wind turbines and electric cars.
They may yet prove a route to making cheap, strong magnets without the need for scarce rare earth metals.
Making a final comment on the results, Dr Harrison said: "In our meteorites we've been able to capture both the beginning and end of core freezing, which will help us understand how these processes affected the Earth in the past and provide a possible glimpse of what might happen in the future."
The Earth's magnetic field will likely die off when the core completely freezes, and Earth will no longer be protected from the Sun's radiation.
"There's no need to panic" said Dr Harrison. "The core won't completely freeze for billions of years, and chances are, the Sun will get us first."
Quelle: BBC
Astronomie
« Zum vorherigen Eintrag Zum nächsten Eintrag »
2801 Views
Created with page4