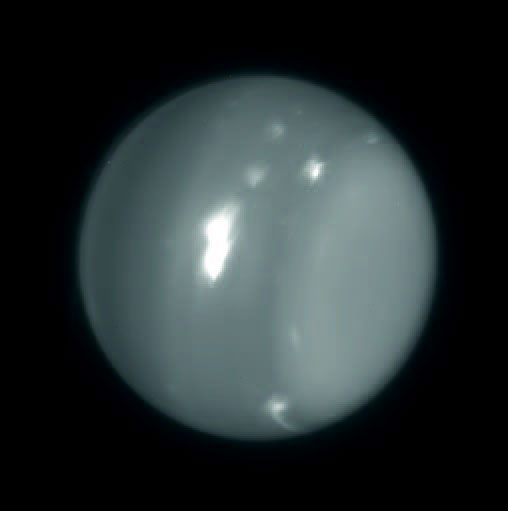 Infrared images of Uranus (1.6 and 2.2 microns) obtained on Aug. 6, 2014, with adaptive optics on the 10-meter Keck telescope. The white spot is an extremely large storm that was brighter than any feature ever recorded on the planet in the 2.2-micron band. The cloud rotating into view at the lower-right limb grew into the large storm that was seen by amateur astronomers at visible wavelengths. Imke de Pater (UC Berkeley) & Keck Observatory images. 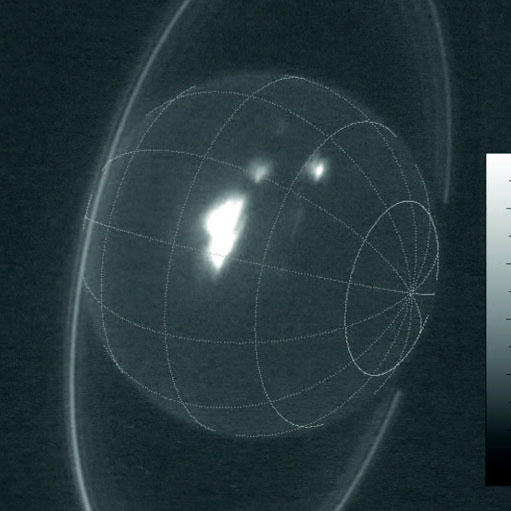 BERKELEY —
The normally bland face of Uranus has become increasingly stormy, with enormous cloud systems so bright that for the first time ever, amateur astronomers are able to see details in the planet’s hazy blue-green atmosphere.
“The weather on Uranus is incredibly active,” said Imke de Pater, professor and chair of astronomy at the University of California, Berkeley, and leader of the team that first noticed the activity when observing the planet with adaptive optics on the W. M. Keck Observatory in Hawaii.
“This type of activity would have been expected in 2007, when Uranus’s once-every-42-year equinox occurred and the sun shined directly on the equator,” noted co-investigator Heidi Hammel of the Association of Universities for Research in Astronomy. “But we predicted that such activity would have died down by now. Why we see these incredible storms now is beyond anybody’s guess.”
In all, de Pater, Hammel and their team detected eight large storms on Uranus’s northern hemisphere when observing the planet with the Keck Observatory on Aug. 5 and 6. One was the brightest storm ever seen on Uranus at 2.2 microns, a wavelength that senses clouds just below the tropopause, the lower boundary of the stratosphere – where the pressure ranges from about 300 to 500 mbar, or half the pressure at Earth’s surface. The storm accounted for 30 percent of all light reflected by the rest of the planet at this wavelength.
When amateur astronomers heard about the activity, they turned their telescopes on the planet and were amazed to see a bright blotch on the surface of a normally boring blue dot.
‘I got it!’
French amateur astronomer Marc Delcroix processed the amateur images and confirmed the discovery of a bright spot on an image by French amateur Régis De-Bénedictis, then in others taken by fellow amateurs in September and October. He had his own chance on Oct. 3 and 4 to photograph it with the Pic du Midi one-meter telescope, where on the second night, “I caught the feature when it was transiting, and I thought, ‘Yes, I got it!’” said Delcroix.
.

Animation showing the movement of the bright spot as Uranus rotated over a two-hour period on Oct. 4, 2014. The infrared images were taken at the Pic du Midi telescope in the French Pyrénées. Courtesy of Marc Delcroix and F. Colas (S2P).
.
“I was thrilled to see such activity on Uranus. Getting details on Mars, Jupiter or Saturn is now routine, but seeing detail on Uranus and Neptune is the new frontier for us amateurs and I did not want to miss that,” said Delcroix, who works for an auto-parts supplier in Toulouse and has been observing the skies – Jupiter in particular – with his backyard telescope since 2006 and, since 2012, occasionally with the Pic du Midi telescope. “I was so happy to confirm myself these first amateur images on this bright storm on Uranus, feeling I was living a very special moment for planetary amateur astronomy.”
Interestingly, the extremely bright storm seen by the 10-meter Keck II telescope in the near infrared is not the one seen by the amateurs, which is much deeper in the atmosphere than the one that initially caused all the excitement. De Pater’s colleague Larry Sromovsky, a planetary scientist at the University of Wisconsin, Madison, identified the amateur spot as one of the few features on the Keck Observatory images from Aug. 5 that was only seen at 1.6 microns, and not at 2.2 microns. The 1.6-micron light is emitted from deeper in the atmosphere, which means that this feature is below the uppermost cloud layer of methane ice in Uranus’s atmosphere.
“The colors and morphology of this cloud complex suggests that the storm may be tied to a vortex in the deeper atmosphere similar to two large cloud complexes seen during the equinox,” Sromovsky said.
Such vortices could be anchored much deeper in the atmosphere and extend over large vertical distances, as inferred from similar vortices on Jupiter, including its Great Red Spot.
An expanded team of astronomers led by Kunio Sayanagi, an assistant professor at Hampton University in Virginia, leveraged the amateur observations to activate a “target of opportunity” proposal on the Hubble Space Telescope, which imaged the entire planet on Oct. 14. Observing at a variety of wavelengths, HST revealed multiple storm components extending over a distance of more than 9,000 kilometers (5,760 miles) and clouds at a variety of altitudes.
De Pater, Sromovsky, Hammel and Pat Fry of the University of Wisconsin will report the details of their observations on Nov. 12 at a meeting of the American Astronomical Society’s Division of Planetary Sciences in Tucson, Ariz.
Ice giant
Uranus is an ice giant, about four times the diameter of Earth, with an atmosphere of hydrogen and helium, with just a bit of methane to give it a blue tint. Because it is so distant – 19 times farther from the sun than Earth – astronomers were able to see little detail on its surface until adaptive optics on both Keck Observatory telescopes revealed features much like those on Jupiter.
De Pater and her colleagues have been following Uranus for more than a decade, charting the weather on the planet, including bands of circulating clouds, massive swirling storms and convective features at its north pole. Bright clouds are probably caused by gases such as methane rising in the atmosphere and condensing into highly reflective clouds of methane ice.
Because Uranus has no internal source of heat, its atmospheric activity was thought to be driven solely by sunlight, which is now weak in the northern hemisphere. Hence astronomers were surprised when these observations showed such intense activity.
Observations taken with the Keck telescope by Christoph Baranec, an assistant professor at the University of Hawaii on Manoa, revealed that the storm was still active, but had a different morphology and possibly reduced intensity.
“If indeed these features are high-altitude clouds generated by flow perturbations associated with a deeper vortex system, such drastic fluctuations in intensity would indeed be possible,” Sromovsky said.
“These unexpected observations remind us keenly of how little we understand about atmospheric dynamics in outer planet atmospheres,” the authors wrote in their paper.
. 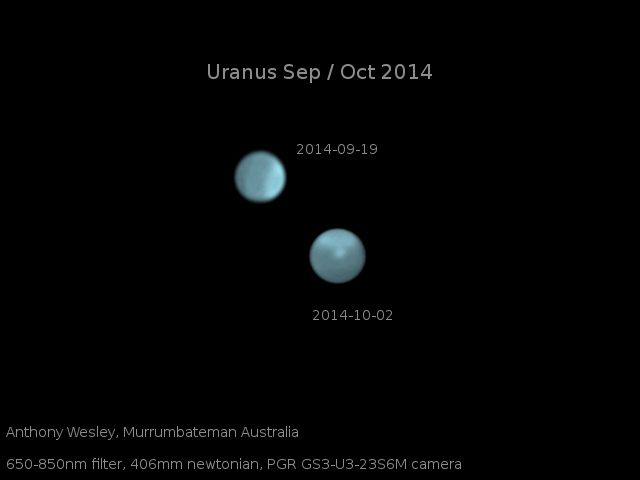 Optical images of Uranus on Sept. 19 and Oct. 2, showing the dramatic appearance of a bright storm on a planet that normally displays only a diffuse bright polar region. Courtesy of amateur astronomer Anthony Wesley, Murrumbateman, Australia.
Quelle:UC Berkeley
.
Update: 22.01.2015
.

Record-breaking Storm Activity on Uranus in 2014

In spite of an expected decline in convective activity following the 2007 equinox of Uranus, eight sizable storms were detected on the planet with the near-infrared camera NIRC2, coupled to the adaptive optics system, on the 10-m W. M. Keck telescope on UT 5 and 6 August 2014. All storms were on Uranus's northern hemisphere, including the brightest storm ever seen in this planet at 2.2 μm, reflecting 30% as much light as the rest of the planet at this wavelength. The storm was at a planetocentric latitude of ∼15∘N and reached altitudes of ∼330 mbar, well above the regular uppermost cloud layer (methane-ice) in the atmosphere. A cloud feature at a latitude of 32∘N, that was deeper in the atmosphere (near ∼2 bar), was later seen by amateur astronomers. We also present images returned from our HST ToO program, that shows both of these cloud features. We further report the first detection of a long-awaited haze over the north polar region.
Quelle: Cornell University Library
-
Mystery storms rage across face of Uranus 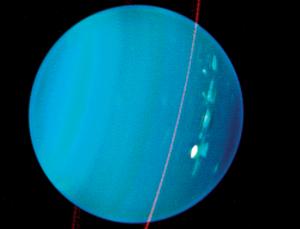 STORMS have clouded Uranus's normally placid face. In the past year, the gas planet has played host to huge cloud systems so bright that even amateur astronomers can see them from Earth – and their cause is a mystery.
"We have no idea. It's very unexpected," says Imke de Pater at the University of California, Berkeley.
De Pater observed Uranus on 5 and 6 August, 2014, and was surprised to spot unusually bright features, the hallmark of clouds condensing in the planet's upper atmosphere. "It was brighter than anything we had ever seen in Uranus's atmosphere before," she says. The planet's weather generally picks up at its spring and autumn equinoxes every 42 years, when the sun shines on the equator. But the last equinox was 7 years ago, so the recent spike in activity is difficult to explain.
De Pater's group spread the word, and amateurs around the globe trained their telescopes on Uranus. Coincidentally, the amateurs spotted a storm that de Pater had imaged at a different wavelength on 5 August. Using the Hubble Space Telescope, de Pater and her colleagues saw storms spanning a variety of altitudes (arxiv.org/abs/1501.01309), which could be linked to a vortex deep in Uranus's atmosphere.
Quelle: NewScientist