JAXA will exhibit the Space Solar Power System (SSPS) at the JAXA Booth at the World Future Energy Summit (WFES) 2015 to be held between Jan. 20 (Wed.) and 22 (Fri.) 2015 at Abu Dhabi.
What kind of system is the SSPS? The following explains the history of an SSPS study conducted both overseas and in Japan, and its merits and challenges.
SSPS History (Conceptual study to date)
The SSPS was first proposed by Dr. Peter Glaser of the United States in 1968. The idea is to produce energy sources by setting up an enormous solar battery and a microwave transmission antenna, transforming solar energy into electricity first, then changing it to microwave, and sending it to a receiving antenna called a “rectifying antenna” or a “rectenna” on the ground. On the ground, the microwave is transformed to electricity to be used as an energy source. This idea was proposed to ultimately construct a society without relying on fossil fuels.
Since then, various types of SSPS concepts have been suggested in the U.S. and Europe. However, due to financial and political reasons or policies, those countries, apart from Japan, have not been able to continue their research in recent years.
. 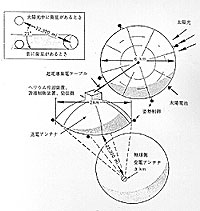 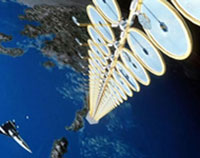 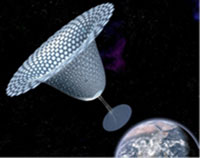 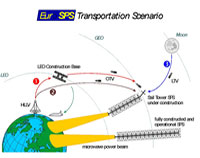 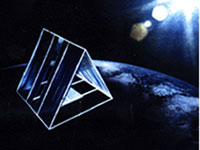 SPS2000
The two faces of a triangular prism are a solar battery, and the remaining face is equipped with a transmission antenna. It was supposed to be launched into a low equatorial orbit to send microwaves (=energy) to a “rectenna” set on the equator.
Source: Achievement report of a commissioned task by New Energy and Industrial Technology Development Organization (NEDO) “Space Solar Power System Research” in 1993.
- 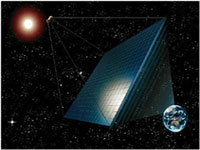 SSPS study by METI
The Ministry of Economy Trade and Industry (METI) commissioned the SSPS research to the Institute for Unmanned Space Experiment (USEF, current Japan Space Systems or J-spacesystems). They adopted a panel-shaped system that integrated a solar battery for power generation and a microwave transmission antenna. The output on the ground is expected to be a million kW.
Photo by J-spacesystems
- 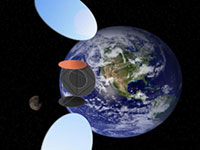 Million kW microwave SSPS model
This concept led by JAXA was studied in the 2000s. The system consists of two reflecting mirrors as a solar battery, and a microwave transmission device.
-
Japan’s research activity – Basic Plan on Space Policy
On January 9, 2015, the new Basic Plan on Space Policy established by the Strategic Headquarters for Space Policy mentioned the SSPS.
For more details, please refer to the following website for the Basic Plan on Space Policy
SSPS merits and challenges
The following chart shows the merits and challenges of the SSPS as follows. For achieving the abovementioned large-scale SSPSs, the funding is especially a big challenge as it requires to reduce the transportation cost of the system to space to less than a few percent of the current cost.
-
Technology
Being a more stable energy source compared to reusable energy on the ground being less impacted by the time of day or weather conditions.
Taking advantage of very intense and strong solar light (about 1.4 times stronger than that on the ground)
Flexibly transmitting and providing energy to the area where power is most wanted. (Reducing the burden of establishing ground power transmission infrastructure.)
Transportation technology for a massive system to space, construction technology of a large structure in space, on-orbit operation and maintenance (repair) technology for a long period are required.
Highly efficient and safe power generation, transmission and reception technology is also necessary.
Safety
(Environment impact etc.)
No greenhouse gas or waste is generated.
The system is less affected by natural disasters (such as an earthquake) on the ground.
Consideration is required not to have microwaves/laser negatively impact human health, the atmosphere, the ionosphere, airplanes, electric appliances and other things.
Measures must be taken for damage by space debris and solar flares.
Safe disposal or reuse of the expired SSPS.
Economy
No fuel cost is required for power generation.
Unlike fossil fuels, price fluctuation due to regional conflicts or supply/demand relation does not matter.
Cost for transportation to space, construction, operation, maintenance, and disposing must be reduced to be able to compete with other energy sources.
Frequency (in the case of microwave) must be secured. In addition, the orbit position and ground reception site must be secured.
-
Space Solar-Power Systems (SSPS) are designed to collect solar energy with large-scale solar collectors deployed in outer space and to transmit that energy to earth as either microwave or laser energy, which is then converted into electric power for our daily use. The group conducts research and development to realize SSPS.
Targets
In order to realize a huge 1GW SSPS that can cover energy demand in the future, various problems in terms of technology, safety and economical efficiency need to be solved. Our group focuses on wireless power transmission and reception technologies to solve such problems. Additionally, through application to new space/aviation missions, etc., we aim to return the results of research and development to society as soon as possible.
-
Research on microwave-energy transmission technologies
The proposed transmission antenna of a microwave-based SSPS is a large-scale structure extending 2 to 3km on one side and the entire antenna vibrates and transforms by disturbances in outer space. The group is performing research on the direction control technology of the beams that, even under such circumstances, accurately transmits microwaves to power receiving sites on the ground.
With this technology, pilot signals transmitted to in-orbit power-transmission antennas from ground power receiving sites are received by the antennas installed in transmission modules. Then, the direction of the signals is detected and used to correct power-transmission direction. Also, in order to align the microwave phases from all the power-transmission modules on the planes of the power receiving antennas, a phase correction of microwaves to be transmitted is performed.
From FY2011 to FY2013, we conducted function and performance tests on the beam direction control technology in a radio-wave darkroom using evaluation models and obtained favorable results.
-
Research on laser-energy transmission technology
To realize a laser-based SSPS, the group is researching space-laser oscillators, the technology of high-accuracy, high-efficiency laser transmission from space to the ground, the weather dependency of lasers in atmospheric transmission, and high-efficiency laser-to-electric power-conversion technology. The group is continuing longdistance (500-meter) laser transmission tests at Kakuda Space Center. In FY2014, we plan to conduct vertical transmission tests using a high tower, and are now building the necessary test system.
-
Research on large-scale structure construction technology
The SSPS requires large space structures, whose sizes vary from hundred meters to kilometers, such as reflecting mirrors and power generation and transmission panels. These structures must be assembled during unmanned operations. In order to establish the assembly technology for such large structures, we are conducting tests on deployable truss structures, etc., to verify the technology and make the structures lightweight.
-
Quelle: JAXA
Raumfahrt
« Zum vorherigen Eintrag Zum nächsten Eintrag »
2965 Views
Created with page4