The US space agency's Perseverance rover is close to completing its first set of objectives on Mars.

The Nasa robot has collected a diverse set of rock samples that it will soon deposit on the surface, awaiting carriage to Earth by later missions.

It's 17 months since the vehicle arrived in an area called Jezero Crater, slung below a rocket crane.

Everything "Percy" has seen since confirms to scientists the rover is in the perfect place to hunt for life.

It's not looking for any organisms that are alive today; the harsh environment on Mars makes their presence highly improbable. Rather, the robot is searching for the traces of a biology that could have existed billions of years ago when Jezero was filled with a lake.

This ancient history, scientists hope, is now recorded in the "amazing" rock samples that will be laid down in "a depot" in the next couple of months.

"If [Jezero's ancient] conditions existed pretty much anywhere on Earth at any point in time over the last 3.5 billion years, I think it's safe to say, or at least assume, that biology would have done its thing and left its mark in these rocks for us to observe," said David Shuster, a Perseverance mission scientist from the University of California, Berkeley. 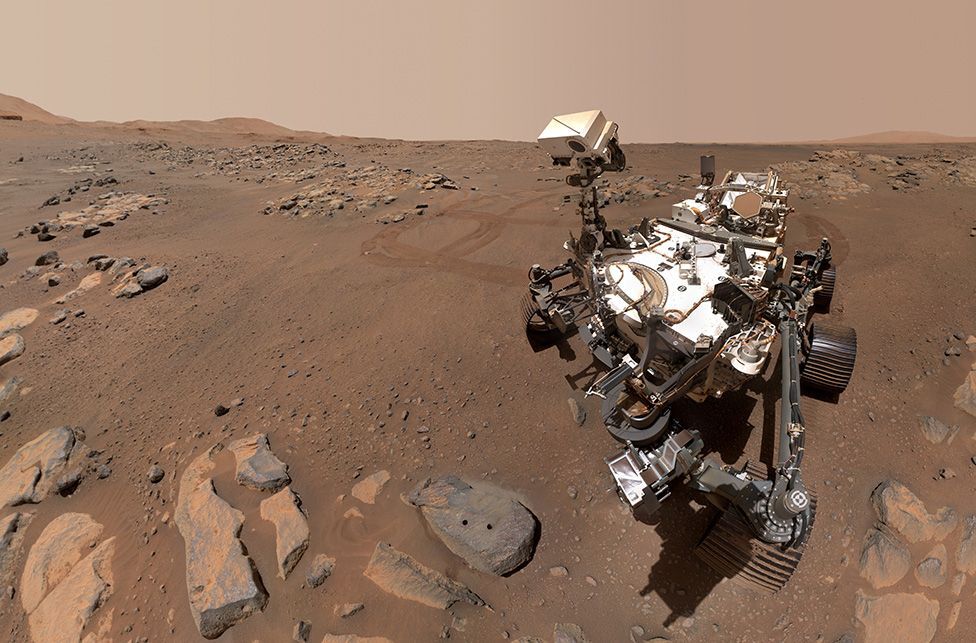 Nasa and the European Space Agency are working up a plan to retrieve the rock cache. It's an audacious plan that will involve another landing system, some helicopters, a Martian rocket and an interplanetary freighter.

The goal is to have the samples back on Earth in 2033.

The delivery will include some examples of igneous, or volcanic, rocks that Perseverance drilled out on the crater floor. These will tell the story, mostly, of Jezero before it was filled with lake water.

Critically, the samples are of a rock type that can be definitively dated. At present, ages on Mars can only be inferred indirectly.

The other part of the cache will include sedimentary type rocks that Perseverance has been collecting in recent months from the delta deposits in the western sector of the 45km-wide crater.

A delta is a structure built up from the silt and sand dumped by a river as it slows on entry into a wider body of water.

It's the kind of geological feature that might just have trapped traces of past microbial life. 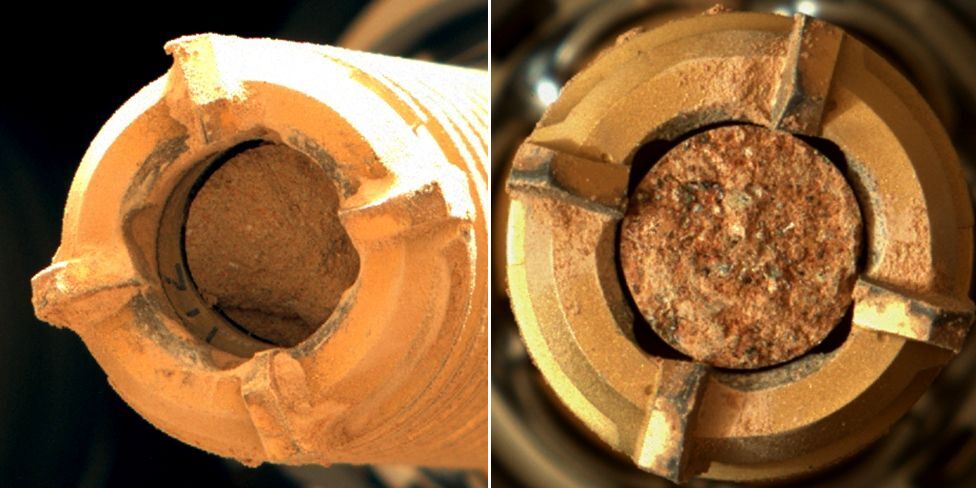 Looking at the sedimentary core samples drilled by Perseverance. Wildcat Ridge is on the left

One of the sedimentary samples, from a rock nicknamed "Wildcat Ridge", was formed when muds settled in the Jezero lake as it was evaporating. It's full of salts. But the rover's instrumentation shows that Wildcat Ridge also contains abundant organic, or carbon-rich, compounds.

This is a tantalising observation but comes with important caveats.

"All life as we know it is made up of organics. But, importantly, organic matter can also be made up by processes that are chemical and not related to life; for instance, through water rock interactions. And organics are also found in interstellar dust," said Sunanda Sharma, a mission instrument scientist at Nasa's Jet Propulsion Laboratory (JPL). 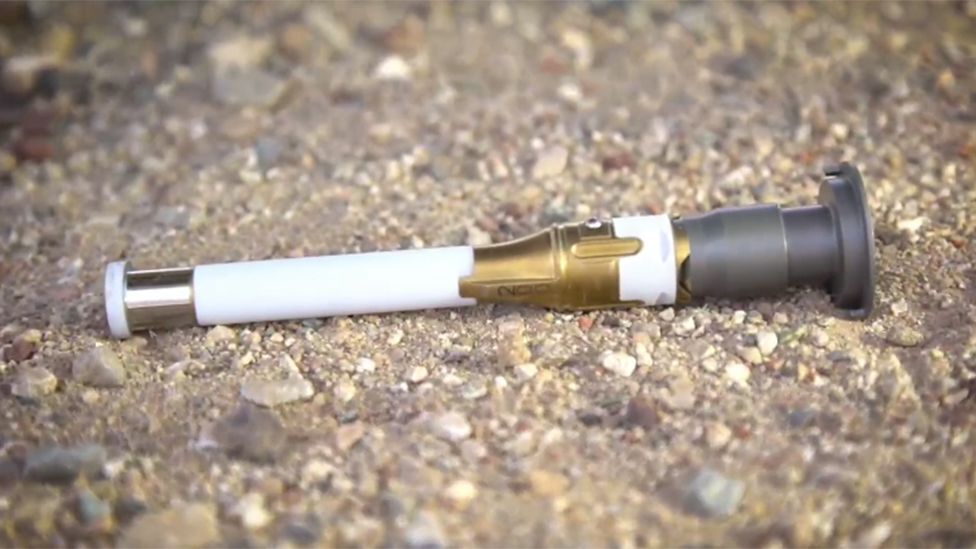 The rock samples are cached in titanium tubes. A collection of them will soon be dropped on the surface

For the last four months, Perseverance has been working on the 40m-high scarp that represents the edge of the delta.

The robot will shortly drive off this slope to a nearby flat area of the crater floor where the rock samples, in their protective titanium tubes, can be deposited on the ground.

"We're looking at the potential of putting down 10 to 11 sample tubes here on the surface," said JPL project systems engineer Rick Welch.

"It would then take about two months to probably put those samples down and actually carefully document where they are, so that a future mission can actually find them." 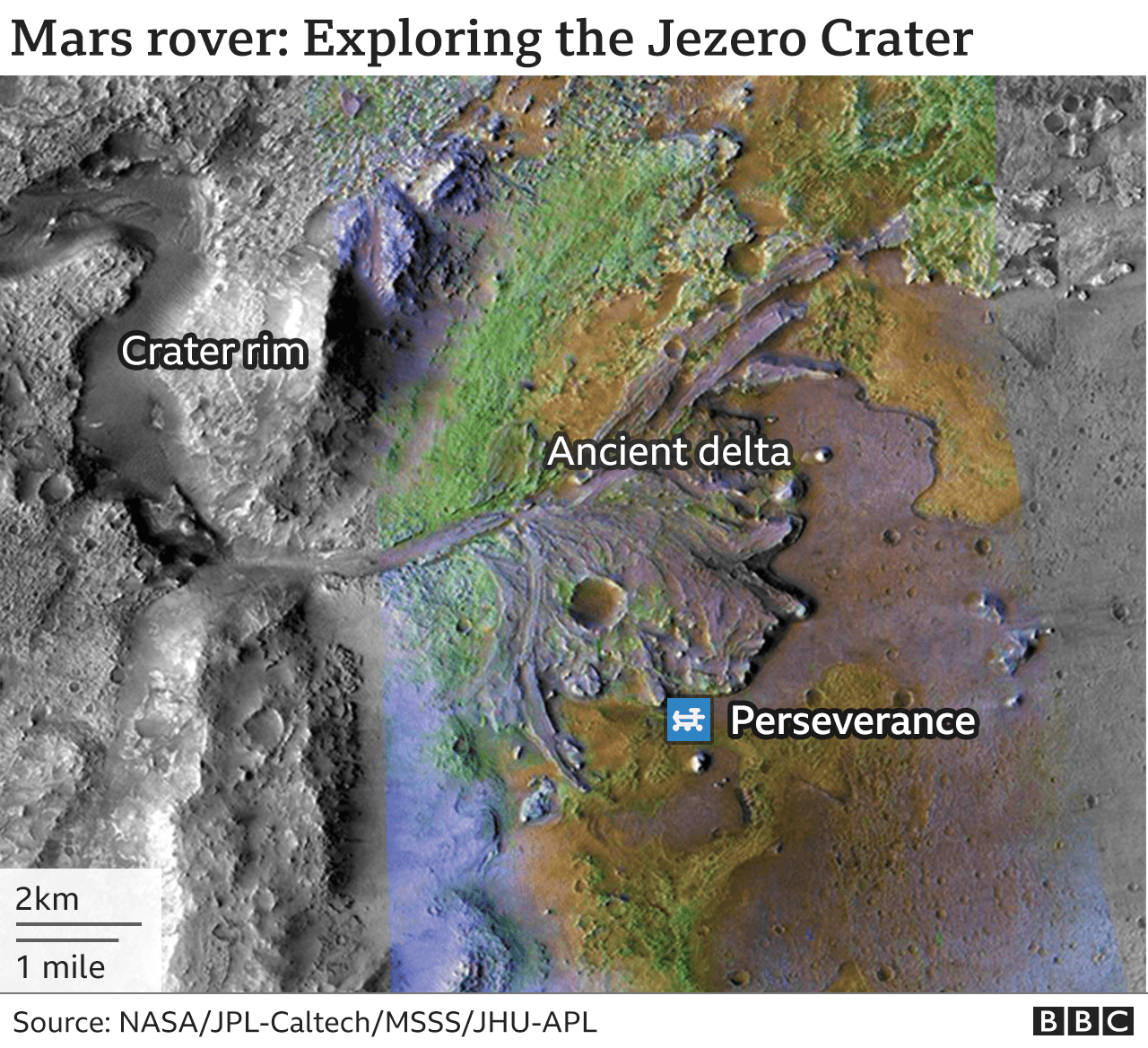 Nasa engineers have been practising how the tubes, currently in the belly of Perseverance, will be ejected. They have a full-sized copy of the rover at JPL on which to simulate manoeuvres before sending up commands to Mars to carry out the actions for real.

A go/no-go decision is expected to be made by Nasa following a meeting on 19 October.

It may be that this first depot dropped by Perseverance becomes an insurance back-up, to be collected for return to Earth only if the rover suffers a catastrophic failure on the rest of its mission.

Scientists want to collect many more samples, in which case the retrieval plan may focus on where the robot goes in future.

A final determination will be driven by events on Mars.

Lori Glaze, the director of Nasa's planetary science division, lauded the "incredible Perseverance team" for the mission achievements so far.

"We not only went to the right place, but we sent the right spacecraft with the right science instruments to explore this amazing ancient environment on Mars," she told reporters. 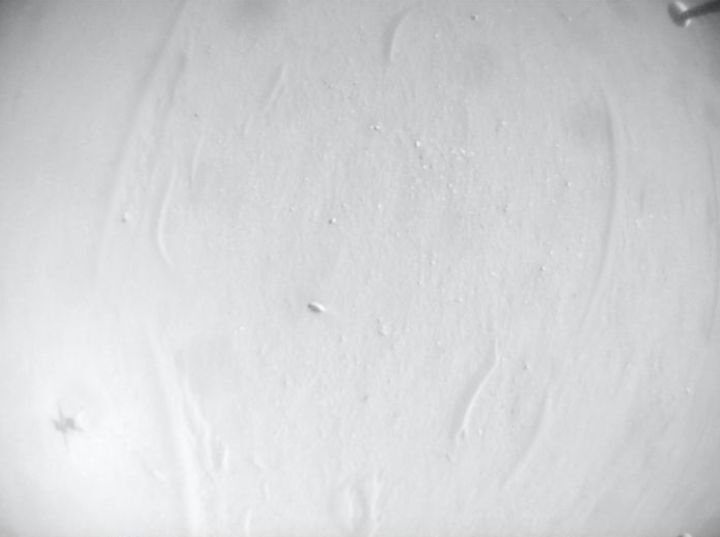 NASA's Ingenuity helicopter has flown again, taking to the Martian skies for the second time in as many weeks.

Ingenuity traveled about 308 feet (94 meters) on Sunday (Sept. 18), staying aloft for more than 55 seconds and reaching a maximum speed of 10.6 mph (17.1 kph), according to NASA's Jet Propulsion Laboratory(opens in new tab) (JPL) in Southern California, which manages the Mars helicopter's mission.

Sunday's flight was the 32nd for Ingenuity overall and its second this month; the 4-pound (1.8 kilograms) rotorcraft also lifted off on Sept. 6.

That earlier flight took Ingenuity closer to an ancient river delta on the floor of Mars' Jezero Crater, a 28-mile-wide (45 kilometers) hole in the ground that the helicopter and its robotic partner, the Perseverance rover, have been exploring since February 2021. Presumably, Sunday's sortie continued that progress, as Ingenuity team members have said that getting to the delta is a near-term priority.

Perseverance has been studying the delta for several months now. The car-sized rover has collected four rock samples from the formation since July, two of them from a stone that's rich in organic molecules, the carbon-containing building blocks of life.

Researchers will be able to study that intriguing material in detail here on Earth, if all goes according to plan: NASA and the European Space Agency are teaming up to bring the rover's samples to our planet, perhaps as early as 2033.

The sample-return architecture includes two Ingenuity-like helicopters capable of carrying sample tubes from one or more depots on Jezero's floor to the rocket that will launch them off the Red Planet. (That rocket, and the other robots that will help get the samples to Earth, remain in development.) It's unclear at the moment if the choppers will be pressed into such service; Perseverance may end up delivering the tubes to the rocket by itself.

Ingenuity initially embarked on a five-flight demonstration mission designed to show that rotorcraft flight is possible in the thin Martian atmosphere. The helicopter quickly aced that task and shifted into an extended mission, during which it's serving as a scout for Perseverance.

Ingenuity has been busy lately. 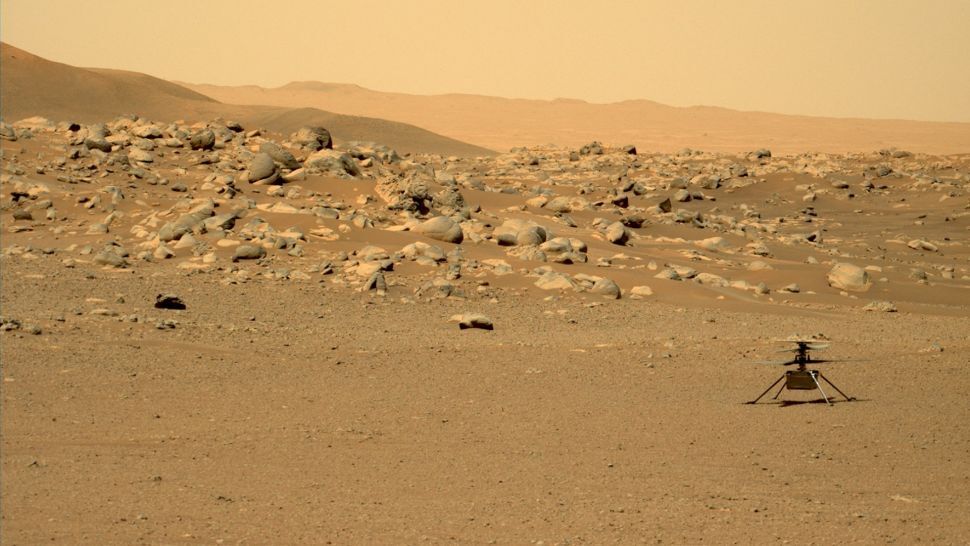 NASA's Ingenuity Mars helicopter has taken flight again, staying aloft for nearly a minute this past weekend on its 33rd extraterrestrial sortie.

Ingenuity, which is a part of NASA's life-seeking Perseverance rover mission, took to the skies of Mars on Saturday (Sept. 24), achieving a flight of just over 55 seconds. The 4-pound (1.8 kilograms) rotorcraft soared roughly 33 feet (10 meters) in the air and moved about 365 ft (111 meters) before alighting in a new location, according to NASA's Jet Propulsion Laboratory (JPL) in Southern California, which manages the missions of both Ingenuity and Perseverance.

"If you look closely at this image, you’ll see Ingenuity’s leg and tiny shadow," JPL officials said via Twitter on Tuesday(opens in new tab) (Sept. 27).

Ingenuity is helping Perseverance explore Jezero Crater, which hosted a lake and a river delta in the ancient past. Later in the 2020s, NASA and the European Space Agency together plan to launch a sample-return mission to the region, which will use helicopters much like Ingenuity to pick up samples gathered by Perseverance and haul them to a rocket for a launch back to Earth.

The team has framed the sample-return mission, and Perseverance's cache of samples, as crucial to help understand the history of the Red Planet and the potential for life on Mars.

Perseverance, meanwhile, met some challenges while trying to perform a rock abrasion earlier in the week. A blog post(opens in new tab) Wednesday (Sept. 28) from JPL said the rock, nicknamed "Chiniak," completely broke apart after the Martian surface reacted in an unexpected way to Perseverance's tools.

"While we had to forgo abrasion proximity science on this target, we gained information about the cohesiveness and strength of the rock and had the opportunity to observe and compare both freshly broken and weathered rock surfaces," Eleanor Moreland, a Ph.D. student at Rice University, wrote in the post.

"Thanks to the quick work of the science and engineers, a new target was selected for a successful abrasion just a couple of days later," Moreland added.

Navigation Camera Imagery of Ingenuity's Flight 33: A small piece of foreign object debris (FOD) is seen in footage from the navigation camera of NASA's Ingenuity Mars Helicopter during its 33rd flight on Mars on Sept 24, 2022. The FOD is seen attached to one of the rotorcraft's landing legs, then drifting away. Credits: NASA/JPL-Caltech. Download image ›

A small piece of foreign object debris (FOD) was seen in footage from the Mars helicopter’s navigation camera (Navcam) for a portion of its 33rd flight. This FOD was not visible in Navcam footage from the previous flight (32). The FOD is seen in Flight 33 Navcam imagery from the earliest frames to approximately halfway through the video, when it fell from the leg and drifted back to the Mars surface. All telemetry from the flight and a post-flight search and transfer are nominal and show no indication of vehicle damage. The Ingenuity and Perseverance Mars 2020 teams are working to discern the source of the debris.

Where is the Mars Helicopter?