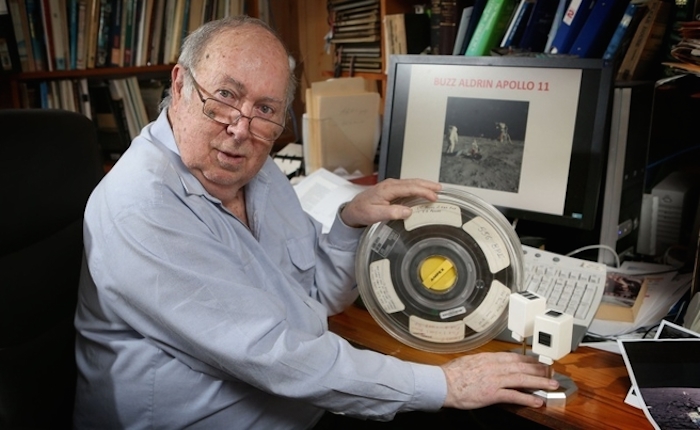 Physics Professor, Brian O'Brien in his Floreat home with one of many Moon Mission data tapes he has as part of his involvement in NASA's moon program.
-
Eight years ago, NASA put a call out for misplaced tapes containing important data collected from Apollo 11 - the first manned mission to the Moon.
So desperate was its search that in 2009, it even set up a committee to try to find the tapes, with thousands of rolls believed to be missing.
So how did 177 rolls of the tapes end up in Perth?
Australian physicist Brian O'Brien was thrilled when his radiation detector was one of seven experiments NASA chose from 90 proposals to accompany Apollo 11 to the Moon in 1969.
NASA was also concerned that his - and the other experiments - would be jeopardised by the Moon's fine dust and would need covers.
Yet, it had no plans to measure the dust and see whether its fears were justified.
So, before the mission, Professor O'Brien invented a simple dust detector and NASA added it to the inaugural lunar landing.
By the time Neil Armstrong took his first tentative steps on the Moon on July 20, 1969, Professor O'Brien was working at the University of Sydney.
Rolls of old-fashioned magnetic tapes started arriving at his university office every three days and, when he moved to Perth to be the first head of WA's Environment Protection Authority in 1971, dozens of them went with him.
The dust detector, which was only about 10cm high, also accompanied the Apollo 12, 13, 14 and 15 missions - so the tapes kept rolling in and in all, Professor O'Brien was sent 177 rolls.
Although they are difficult to read because of their outdated technology, Professor O'Brien still believes there is a lot to learn from the contents.
"We have started going through them and made a dozen interesting discoveries, which have been published," he said.
So in 2006 when NASA announced that its tapes were missing and the data no longer existed, Professor O'Brian contacted the space agency about his rolls.
"We don't know what they did with the originals, but they were pleased that we could supply them with data," he said.
Professor O'Brien served as EPA chairman from 1971 to 1977.
Quelle: The West Australian
Raumfahrt
« Zum vorherigen Eintrag Zum nächsten Eintrag »
3151 Views
Created with page4