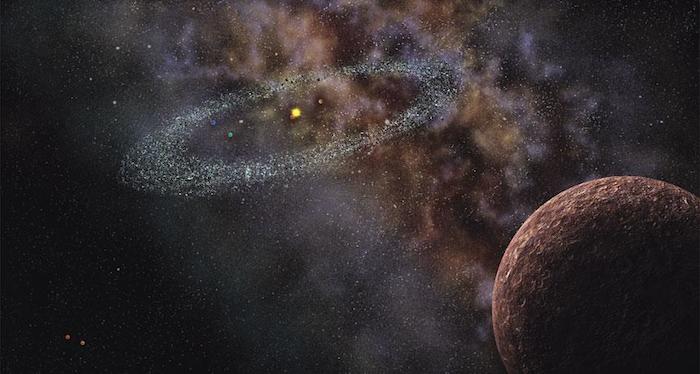 Out beyond Neptune, the solar system resembles the deep ocean: dark, remote and largely unexplored. To an Earth-bound observer, even the brightest objects, such as Pluto, are 4,000 times as faint as what the human eye can see. An undiscovered planet could easily lurk out there unnoticed, a possible fossil from a time when the giant planets jockeyed for position 4 billion years ago, scattering planets and asteroids in their wake. But even the largest telescopes would struggle to find such a faint spot of light. Most likely, the clues would be entangled in the distorted orbits of faraway ice boulders tumbling around the sun.
Astronomers Chad Trujillo and Scott Sheppard provided a hint about how such a world might reveal itself last March when they announced the discovery of a 450-kilometer-wide dwarf planet just outside the Kuiper belt — the icy debris field past Neptune (SN: 5/3/14, p. 16).
Their find, designated 2012 VP113, is on a course that loops around the sun in a vastly elongated orbit far from the known planets. It has thousands of neighbors but shares its odd trajectory only with Sedna, another dwarf planet, discovered in 2003.
“They’re kind of in a no-man’s-land,” says Sheppard, of the Carnegie Institution for Science in Washington, D.C. “These objects couldn’t get out there with what we currently know.”
Something had to drag the two dwarf planets from their original, smaller orbits. Except nothing is close or massive enough to take the credit. At least, nothing astronomers are aware of.
The discovery of 2012 VP113 confirmed that Sedna is not a fluke but is possibly the first of a large population of icy bodies distinct from others in the rest of the solar system. So Trujillo and Sheppard continued to poke around the Kuiper belt, and the mystery deepened. They noticed that beyond 150 astronomical units (150 times the distance from the sun to the Earth), 10 previously discovered objects, along with Sedna and 2012 VP113, follow orbits that appear strangely bunched up.
“That immediately piqued our interest,” says Sheppard. Could an unseen planet, a Planet X, be holding the orbits of all these far-out bodies in place?
“The idea’s not crazy,” says David Jewitt, a planetary scientist at the University of California, Los Angeles. “But I think the evidence is slim.” The trail of bread crumbs leading to an undiscovered planet is sparse: just 12 chunks of ice lead the way. But it’s enough to get some researchers wondering about a ninth (or 10th, depending on your attitude regarding Pluto) planet roaming the outer solar system and how it might have arrived there.
Kuiper belt clues
“The exciting thing for me is that 2012 VP113 exists,” says Megan Schwamb, a planetary scientist at Academia Sinica in Taipei, Taiwan. “Whatever put Sedna on its orbit should have put a whole bunch of other objects out there.”
.

All known objects beyond 150 times the distance from the sun to Earth make their closest approach to the sun (perihelion) as they pass through the plane of the solar system. Those perihelia should be spread out like Kuiper belt objects. The reason they are not is a mystery.
Sources: C.A. Trujillo and S.S. Sheppard; JPL/Caltech; IAU Minor Planet Center
.
Instead of trying to directly observe a planet, researchers are looking for more Kuiper belt objects, whose orbits might bear the gravitational signature of something unseen. Trujillo and Sheppard discovered 2012 VP113 as part of an ongoing effort to scan the sky from Cerro Tololo Inter-American Observatory in Chile. Undoubtedly, more interesting objects will turn up.
Most telescope searches, however, are akin to mapping the universe while staring through a drinking straw. Telescopes see a tiny fraction of the sky, and observatories dole out access just a few days at a time. Sheppard says that it will take them several years to cover just 20 percent of the sky.
Enter the Large Synoptic Survey Telescope, or LSST, an 8.4-meter-wide telescope being built in northern Chile with full operations planned for late 2023. Unlike other telescopes, it will have an enormous field of view and will make a decade-long movie of the sky, perfect for looking for moving points of light.
Lynne Jones, an astronomer at the University of Washington in Seattle, says the LSST could find 20,000 to 40,000 more bodies in the Kuiper belt. With about 20 times as many Kuiper belt objects in hand, astronomers should be able to see if there are more objects with bizarre orbits and determine if the bunching of perihelia is real or just an artifact of having found only a few.
Plus, says Jones, LSST could detect an Earth-sized planet out to between 300 and 500 astronomical units, depending on how reflective its surface is.
For planetary scientists, if a remote Planet X exists the question is: How do you form a planet that far from the sun? Renu Malhotra, a planetary scientist at the University of Arizona in Tucson, says the problem is time. At that distance, the planet building materials would have been smeared over a ring several hundred billion kilometers around. “To make a planet the size of the Earth,” says Malhotra, “could take longer than the age of the solar system.” The only solution, she says, is to steal the planet from somewhere else.
Uranus and Neptune are the most likely thieves, pilfering planets from the space between their orbits. Malhotra says that a close encounter with either of those giants could slingshot an Earth-sized ball of rock to well beyond the Kuiper belt.
Planet X might also be extrasolar, says planetary scientist Rodney Gomes of the National Observatory in Rio de Janeiro. The sun was born in a nebula along with several thousand other stars, and many of those probably had planets of their own. As stars jostled each other, planets could have been torn away from one star and captured by the gravity of another. Perhaps Planet X is just the result of a brief game of interstellar catch.
. 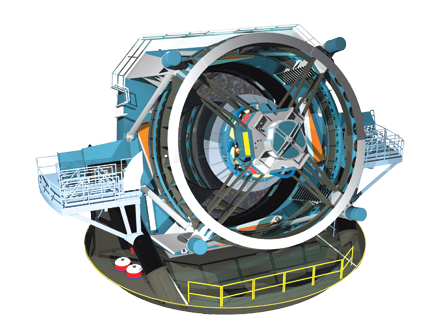 The Large Synoptic Survey Telescope in Chile, illustrated here, will make a 10-year-long movie of the night sky starting in 2023.
.
“The jury’s still out on whether you need to have a planet there or not,” Schwamb says. A close encounter with a passing star could have lured Sedna and 2012 VP113 away from their siblings, like an astronomical pied piper. Stellar flybys are rare, however, and the star must pass close enough for the two dwarf planets to notice but not so close that it disrupts the entire Kuiper belt and possibly the outer planets.
The odds go up if the star is a relative, born in the same nebula as the sun. In addition to tossing planets around, stellar siblings could have tugged on the debris swirling around the sun. The distorted orbits would have frozen in place after the sun’s brothers and sisters drifted away.
For 168 years, the lure of planets hiding beyond Neptune has never faded. The remoteness of the outer solar system, Jewitt says, “leaves open the door to all sorts of wild speculation.”
The hunt for Planet X “is one of those things that’s very high risk,” Luhman says, “but if it was found, it would be a huge discovery.” Astronomers have discovered more than 1,800 planets orbiting other stars, and yet our own backyard is still largely a mystery. “We haven’t explored all of the solar system yet,” Sheppard says, “so people always want to believe that there’s something else out there.”
Quelle: ScienceNews
Astronomie
« Zum vorherigen Eintrag Zum nächsten Eintrag »
3562 Views
Created with page4