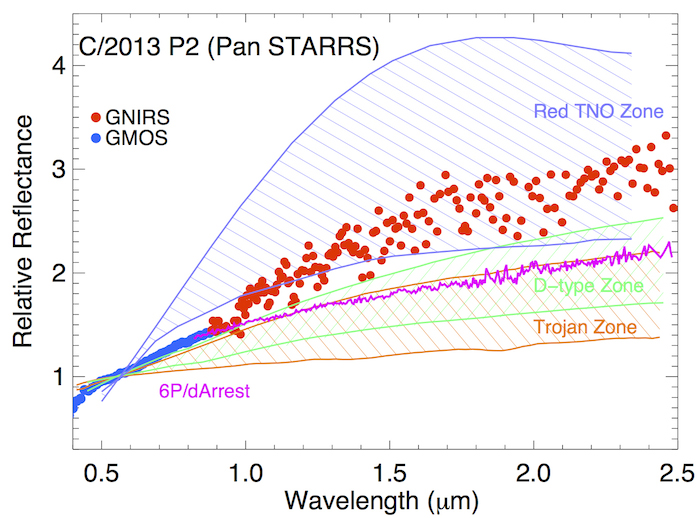 Astronomers are announcing today the discovery of two unusual objects in comet-like orbits that originate in the Oort cloud but with almost no activity, giving scientists a first look at their surfaces. These results, presented today at the annual meeting of the Division of Planetary Sciences of the American Astronomical Society in Tucson, Arizona, are particularly intriguing because the surfaces are different from what astronomers expected, and they give us clues about the movement of material in the early solar system as the planets were assembled.
On August 4, 2013 an apparently asteroidal object, C/2013 P2 Pan-STARRS, was discovered by the Pan STARRS1 survey telescope (PS1) on Haleakala, Maui, Hawaii.  What made this object unique is its orbit – that of a comet coming from the Oort cloud, with an orbital period greater than 51 million years, yet no cometary activity was seen.   The Oort cloud is a spherical halo of comet nuclei in the outer solar system that extends to about 100,000 times the Earth-sun distance, which is known as 1 astronomical unit, or 1 AU.
“Objects on long-period orbits like this usually exhibit cometary tails, for example comet ISON and comet Hale Bopp, so we immediately knew this object was unusual,” explained team leader Dr. Karen Meech (Institute for Astronomy, University of Hawaii at Manoa).  “I wondered if this could be the first evidence of movement of solar system building blocks from the inner solar system to the Oort cloud.”
Follow-up observations in September 2013 with the 8-meter Gemini North telescope on Maunakea, Hawaii, hinted at faint, low-level light reflected off a dusty tail.   This tail remained through the object’s closest approach to the sun (2.8 times the Earth-sun distance, within the outer asteroid belt) in February 2014, but the object didn’t get much brighter.
When the object was observable again in the spring, the team used the Gemini North telescope to obtain a spectrum of the surface, which showed that it was very red, completely different from comet or asteroid surfaces, and more like the surface of an ultra-red Kuiper belt object.
“We had never seen a naked (inactive) Oort cloud comet, but Jan Oort hypothesized their existence back in 1950 when he inferred the existence of what we now call the Oort cloud. Oort suggested that these bodies might have a layer of “volatile frosting” left over from 4.5 billion years of space radiation that disappears after their first pass through the inner solar system.  Maybe we are seeing the first evidence of this,” said Dr. Olivier Hainaut of the European Southern Observatory.
While the team analyzed their observations of comet C/2013 P2 Pan-STARRS, a second object was discovered. C/2014 S3 Pan-STARRS was discovered through the NASA-sponsored Near Earth Object Survey on the PS1 telescope on September 22, 2014.  Like C/2013 P2 Pan-STARRS, it was on the same type of cometary orbit and also showed minimal activity.  Team member Dr. Richard Wainscoat (IfA, UHM) commented, “With PS1 now exclusively involved in surveying the solar system for Near Earth Objects (NEOs), we expect to find many fascinating objects.  This will help revolutionize our understanding of the early solar system.”
. 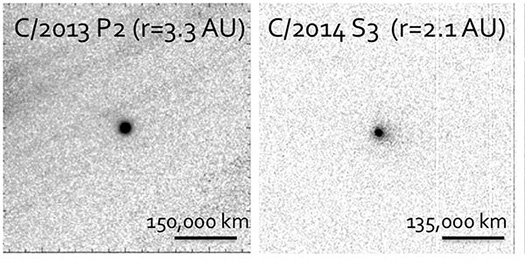 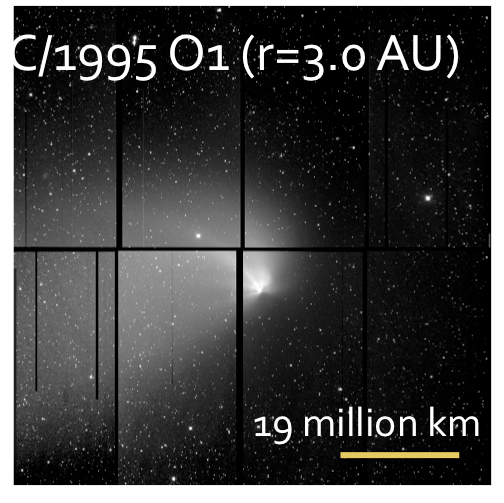 Images of C/2013 P2 (left) obtained using the Gemini North 8-meter telescope on 2013 September 4 when it was 3.29 AU from the sun, and of P/2014 S3 (center) obtained using the CFHT on September 26, 2014 when it was 2.12 AU from the sun. Both images have been processed to remove most of the background stars and galaxies to enhance the visibility of the faint dust tails. These images of the two barely active distant comets contrast sharply with another Oort cloud comet imaged at a similar distance, 3.04 AU, C1995 O1 Hale-Bopp. This image was obtained by K. Meech, O. Hainaut, and J. Bauer on 9/17/96. Compared with it, the Pan-STARRS comets are wimps.
.
The team immediately followed up this second object with the Canada-France-Hawaii Telescope (CFHT) on Maunakea, to obtain data on the object’s colors, and to their surprise, this one has colors similar to inner solar system asteroid material.
“While the orbit of C/2014 S3 is similar to objects in the so-called Damocloid class, which are believed to be extinct comets, the surface of this object looks nothing like previously observed Damocloids.  This is the first outer solar system object which matches inner asteroid belt material,” said team member Henry Hsieh (Academia Sinica, Taipei, Taiwan).  “Damocloids typically have moderately red surfaces, but this is much more blue.  These may be the first of a new class of objects,” noted team member Bin Yang (ESO Santiago, Chile).
While the orbit of C/2014 S3 Pan-STARRS took it closer to the sun than C/2013 P2 in mid August 2014 (2.0 AU—between the asteroid belt and the orbit of Mars), it also barely had a tail.
“I’ll be thrilled if this object turns out to have a surface composition similar to asteroids in the inner part of the asteroid belt.  If this is the case, it will be remarkable for a body found so far out in the Solar System, especially since it exhibited a tail that may be due to volatile outgassing,” commented Meech.  “There are several models that try to explain how the planets grew in the early solar system, and some of these predict that material formed close to the sun could have been thrown outward into the outer Solar System and Oort cloud, where it remains today.  Maybe we are finally seeing that evidence.”
The report is being presented by Drs. Karen Meech, Jan Kleyna, Jacqueline Keane, Richard Wainscoat of the University of Hawaii at Manoa’s Institute for Astronomy (Honolulu, Hawaii), Bin Yang (Santiago, Chile) and Olivier Hainaut (Garching, Germany) from the European Southern Observatory, Henry Hsieh from Academia Sinica (Taipei, Taiwan), Ryan Park and James Bauer from the Jet Propulsion Laboratory (Pasadena, California), Peter Veres from Comenius University (Bratislava, Slovakia), and Bhuwan Bhatt and Devendra Sahu from the Indian Institute of Astrophysics (Bangalore, India).
Based in part on observations obtained at the Pan-STARRS1 Survey telescope, made possible through the Pan STARRS science consortium, in part at the Gemini Observatory which is operated by the Association of Universities for Research in Astronomy, Inc., under a cooperative agreement with the NSF on behalf of the Gemini partnership; in part on observations obtained with MegaPrime/MegaCam, a joint project of CFHT and CEA/DAPNIA, at the Canada-France-Hawaii Telescope (CFHT) which is operated by the National Research Council of Canada, the Institute National des Sciences de l'Univers of the Centre National de la Recherche Scientifique of France, and the University of Hawaii. The observations are also based in part from the Himalayan Chandra Telescope, operated by the Indian Institute of Astrophysics, Bangalore, and through the use of the 72-inch Perkins telescope at Lowell Observatory in Arizona.
This work was supported by NASA through the NASA Astrobiology Institute under Cooperative Agreement No. NNA09DA77A issued through the Office of Space Science, and in part based upon work supported by the National Aeronautics and Space Administration under Grant No. NNX12AR65G and Grant No. NNX14AM74G issued through the NEO Observation Program.
Founded in 1967, the Institute for Astronomy at the University of Hawaii at Manoa conducts research into galaxies, cosmology, stars, planets, and the sun. Its faculty and staff are also involved in astronomy education, deep space missions, and in the development and management of the observatories on Haleakala and Maunakea. The Institute operates facilities on the islands of Oahu, Maui, and Hawaii.
The Gemini Observatory is an international collaboration with two identical 8-meter telescopes. The Frederick C. Gillett Gemini Telescope is located on Mauna Kea, Hawai’i (Gemini North) and the other telescope on Cerro Pachón in central Chile (Gemini South); together the twin telescopes provide full coverage over both hemispheres of the sky. The telescopes incorporate technologies that allow large, relatively thin mirrors, under active control, to collect and focus both visible and infrared radiation from space. The Gemini Observatory provides the astronomical communities in six partner countries with state-of-the-art astronomical facilities that allocate observing time in proportion to each country’s contribution. In addition to financial support, each country also contributes significant scientific and technical resources. The national research agencies that form the Gemini partnership include: the U.S. National Science Foundation (NSF); the Canadian National Research Council (NRC); the Brazilian Ministério da Ciência, Tecnologia e Inovação (MCTI); the Australian Research Council (ARC); the Argentinean Ministerio de Ciencia, Tecnología e Innovación Productiva; and the Chilean Comisión Nacional de Investigación Cientifica y Tecnológica (CONICYT). Gemini is managed by the Association of Universities for Research in Astronomy, Inc. (AURA) under a cooperative agreement with the NSF. The NSF also serves as the executive agency for the international partnership.
Quelle: Institute for Astronomy / University of Hawaii
Astronomie
« Zum vorherigen Eintrag Zum nächsten Eintrag »
2690 Views
Created with page4