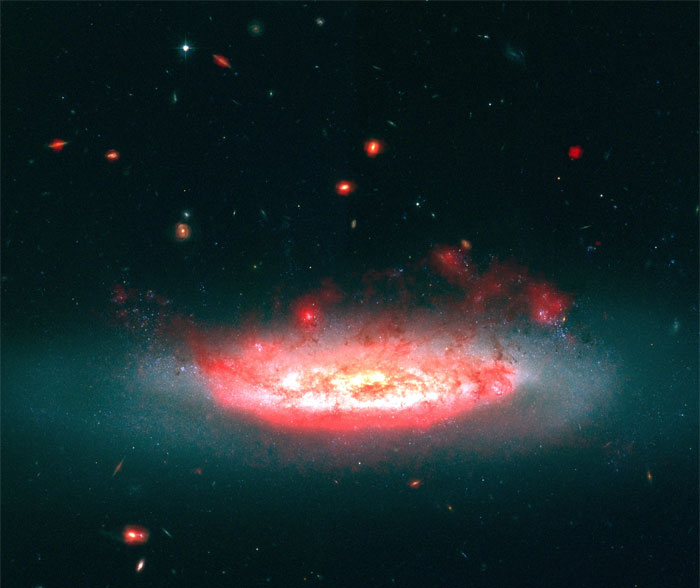 TORONTO, ON (13 November 2014) Astronomers from the University of Toronto and the University of Arizona have provided the first direct evidence that an intergalactic “wind” is stripping galaxies of star-forming gas as they fall into clusters of galaxies. The observations help explain why galaxies found in clusters are known to have relatively little gas and less star formation when compared to non-cluster or “field” galaxies.
Astronomers have theorized that as a field galaxy falls into a cluster of galaxies, it encounters the cloud of hot gas at the centre of the cluster. As the galaxy moves through this intra-cluster medium at thousands of kilometres per second, the cloud acts like a wind, blowing away the gas within the galaxy without disturbing its stars. The process is known as ram-pressure stripping.
Previously, astronomers had seen the very tenuous atomic hydrogen gas surrounding a galaxy get stripped. But it was believed that the denser molecular hydrogen clouds where stars form would be more resistant to the wind. “However, we found that the molecular hydrogen gas is also blown from the in-falling galaxy,” says Suresh Sivanandam of the Dunlap Institute at the University of Toronto, “much like smoke blown from a candle being carried into a room.”
Previous observations showed indirect evidence of ram-pressure stripping of star-forming gas. Astronomers have observed young stars trailing from a galaxy; the stars would have formed from gas newly-stripped from the galaxy. A few galaxies also have tails of very tenuous gas. But the latest observations show the stripped, molecular hydrogen itself, which can be seen as a wake trailing from the galaxy in the direction opposite to its motion.
“For more than 40 years we have been trying to understand why galaxies in dense clusters have so few young stars compared with ones like our Milky Way Galaxy, but now we see the quenching of star formation in action,” says George Rieke of the University of Arizona. “Cutting off the gas that forms stars is a key step in the evolution of galaxies from the early Universe to the present.”
The results, published in the Astrophysical Journal on Nov. 10, are from observations of four galaxies. Sivanandam, Rieke and colleague Marcia Rieke (also from the University of Arizona) had already established that one of the four galaxies had been stripped of its star-forming gas by this wind. But by observing four galaxies, they have now shown that this effect is common.
The team made their analysis using optical, infrared and hydrogen-emission data from the Spitzer and Hubble space telescopes, as well as archival ground-based data. The team used an infrared spectrograph on the Spitzer because direct observation of the molecular hydrogen required observations in the mid-infrared part of the spectrum—something that’s almost impossible to do from the ground.
“Seeing this stripped molecular gas is like seeing a theory on display in the sky,” says Marcia Rieke. “Astronomers have assumed that something stopped the star formation in these galaxies, but it is very satisfying to see the actual cause.”
Quelle:University of Toronto