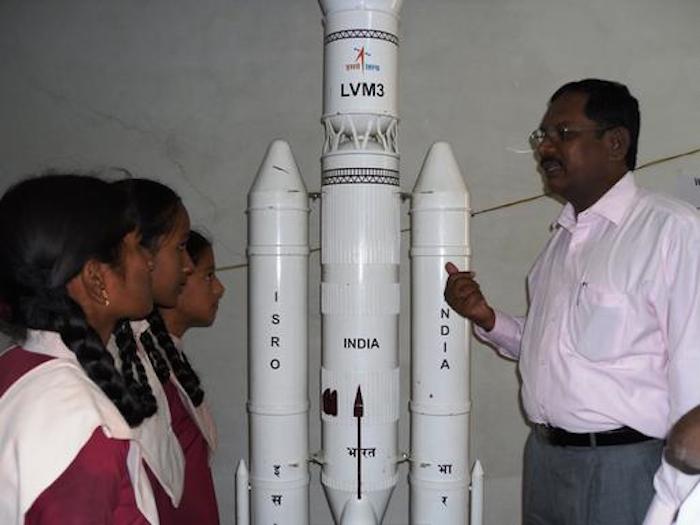 Future workhorse will test unmanned crew module: ISRO chief
GSLV Mark-III, the bigger and better space vehicle that will enable larger national communication satellites to be launched from India, is set for its first partial test flight in the first half of December.
The landmark test flight will lead to a “future workhorse vehicle that will stay with us for many years,” ISRO Chairman K. Radhakrishnan said.
It also tests features of an unmanned crew module that will be flown down from space and recovered from sea.
The second study is part of an ambitious future Human Space Flight proposal that is yet to be approved. The space agency has not attempted a partial test flight before in its rocket development course but Mark-III’s new gas generator cycle technology allows this.
In the crew module test, “the main objective is to look at heating during re-entry and how a vehicle of that size and shape performs in the crucial space phase. The thermal protection systems around the crew module must withstand the [high] temperature.” A failsafe, parachute-aided descent of the crew module is crucial for flying future Indian astronauts into space and getting them back to Earth safely.
Pre-launch activities have begun for Mark-III, Dr. Radhakrishnan said on the sidelines of an engineers’ conclave here. A parachute test was conducted on Thursday and another one would be done in the coming days.
The vehicle stages are being put together and electrical checks are being done at launch site Sriharikota; propulsion systems are being readied at Mahendragiri.
“We should be able to integrate the vehicle [with] the crew module by the end of this month and test the entire system [on ground]," he said.
Mark-III is a totally new vehicle different from the smaller indigenous GSLV Mark-II [II] that is of half its capacity. Its three stages are respectively fuelled by solid, liquid and the upper cryogenic propellants.
For the December flight, “the [solid-fuelled] strap-ons and the liquid core are active but the cryogenic engines will not be ignited. The propellants will be simulated.”
Two years away
Mark-III can have its first full developmental flight — carrying a full satellite of about 3,500 kg – only when the cryogenic stage is qualified; that could take two to three years. ISRO now depends on costly foreign launchers to put its 3-tonne communication satellites into space.
“If a couple of developmental flights succeed, then we should be able to launch from India communication satellites weighing 3.5 tonnes to 4 tonnes and which can carry more transponders and more power... We now have confidence [of realising] the cryogenic engine and stage in that timeframe,” said Dr. Radhakrishnan.
Quelle: The Hindu
Raumfahrt
« Zum vorherigen Eintrag Zum nächsten Eintrag »
2781 Views
Created with page4