Supersonic laser-propelled rockets: Hybrid approach may help power rockets, launch satellites, push future aircraft past Mach 10
Researchers have described a new system that integrates a laser-ablation propulsion system with the gas blasting nozzles of a spacecraft which can increase the speed of the gas flow out of the system to supersonic speeds while reducing the amount of burned fuel. 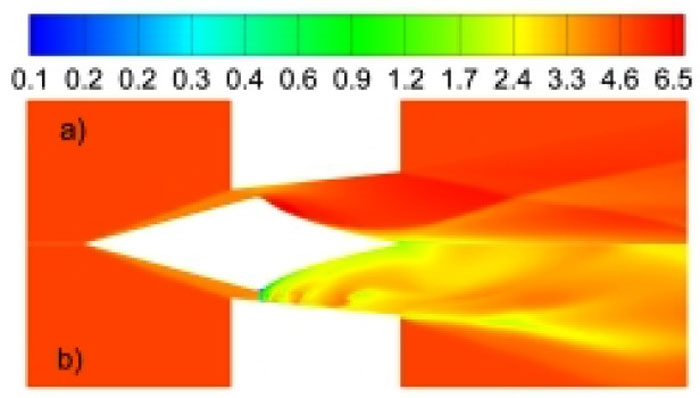 The effectiveness of current laser-propulsion techniques is limited by the instability of supersonic gas flow, caused by shock waves that “choke” the inlet of the nozzle, reducing thrust. Those effects can be reduced with the help of laser ablation, redirecting the plasma plume so that it flows close to the interior walls of a supersonic nozzle and significantly improving the overall thrust.

Scientists and science fiction writers alike have dreamt of aircrafts that are propelled by beams of light rather than conventional fuels. Now, a new method for improving the thrust generated by such laser-propulsion systems may bring them one step closer to practical use.

The method, developed by physicists Yuri Rezunkov of the Institute of Optoelectronic Instrument Engineering, Russia and Alexander Schmidt of the Ioffe Physical Technical Institute in Saint Petersburg, Russia is described today in The Optical Society's (OSA) journal Applied Optics.
Currently, the maximum speed of a spacecraft is limited by the amount of solid or liquid fuel that it can carry. Achieving higher speeds means that more fuel must be burned -- fuel that, inconveniently, has to be carried by the craft and hefted into space. These burdensome loads can be reduced, however, if a laser -- one located at a remote location, and not actually on the spacecraft -- were used to provide additional propulsive force.
A number of systems have been proposed that can produce such laser propulsion. One of the most promising involves a process called laser ablation, in which a pulsed laser beam strikes a surface, heats it up, and burns off material to create what is known as a plasma plume -- a column of charged particles that flow off the surface. The outflowing of that plasma plume -- essentially, exhaust -- generates additional thrust to propel the craft.
In their Applied Optics paper, Rezunkov and Schmidt describe a new system that integrates a laser-ablation propulsion system with the gas blasting nozzles of a spacecraft. Combining the two systems, the researchers found, can increase the speed of the gas flow out of the system to supersonic speeds while reducing the amount of burned fuel.
The researchers show that the effectiveness of current laser-propulsion techniques is limited by factors including the instability of supersonic gases as they flow through the gas nozzle, as well as the production of shock waves that "choke" the inlet of the nozzle, reducing thrust. But those effects can be reduced with the help of a laser-ablation plasma plume that is redirected so that it will flow close to the interior walls of the nozzle. Coupling the ablation jet with supersonic gas flow through the nozzle, they find, significantly improves the overall thrust generated by the nozzle.
"Summarizing the data obtained, we can forecast the application of the supersonic laser propulsion techniques not only for launching small satellites to Earth orbits but also for additional acceleration of supersonic aircrafts to achieve Mach 10 and more," Rezunkov said.
Quelle: ScienceDaily
2485 Views
Created with page4