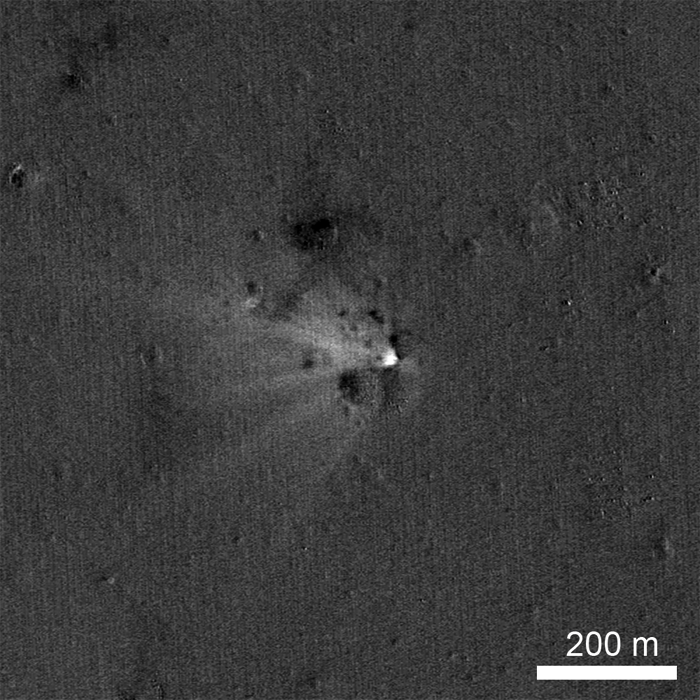 LRO has imaged the LADEE impact site on the eastern rim of Sundman V crater. The image was created by ratioing two images, one taken before the impact and another afterwards. The bright area highlights what has changed between the time of the two images, specifically the impact point and the ejecta.
Image Credit: NASA/Goddard/Arizona State University
.
NASA’S Lunar Reconnaissance Orbiter (LRO) spacecraft has spied a new crater on the lunar surface; one made from the impact of NASA’s Lunar Atmosphere and Dust Environment Explorer (LADEE) mission.
“The Lunar Reconnaissance Orbiter Camera (LROC) team recently developed a new computer tool to search Narrow Angle Camera (NAC) before and after image pairs for new craters, the LADEE impact event provided a fun test, said Mark Robinson, LROC principal investigator from Arizona State University in Tempe. “As it turns there were several small surface changes found in the predicted area of the impact, the biggest and most distinctive was within 968 feet (295 meters) of the spot estimated by the LADEE operations team. What fun!”
The LADEE mission ended on April 18, 2014, with the spacecraft’s planned impact into the eastern rim of Sundman V crater on the far side of the moon.
LADEE's engines fired April 11, 2014, to perform a final orbital maintenance maneuver and adjust to guarantee it would impact on the farside of the moon and away from the Apollo landing sites. Over a seven-day period, LADEE's orbit decreased and the spacecraft orbited very low to the surface and close to the walls of lunar craters and mountain ridges to give the team a chance to collect valuable science data. Finally, LADEE impacted the eastern rim of Sundman V crater on April 18. The impact site is about half a mile (780 meters) from the crater rim with an altitude of about 8,497 feet (2,590 meters) and was only about two tenths of a mile (300 meters) north of the location mission controllers predicted based on tracking data.
The impact crater is small, less than ten feet (three meters) in diameter, barely resolvable by the LROC NAC. The crater is small because the spacecraft -- compared to most celestial impacts -- was not traveling very fast, approximately 3,800 miles per hour (1,699 meters per second) and had a low mass and a low density. The size of the impact crater made it hard to identify among the myriad of small fresh craters on the lunar surface. Images acquired of the impact region before the impact, were compared with images obtained after the impact to identify the crater.
Since the NAC images are so large (250 mega-pixels) and the new crater is so small, the LROC team co-registered the before and after images (called a temporal pair) and then divided the before image by the after image. By doing this, changes to the surface become evident.
The ejecta from the impact forms a triangular pattern primarily downrange to the west, extending about 656-984 feet (200-300 meters) from the impact site. There is also a small triangular area of ejecta up range but it extends only about 66-98 feet (20-30 meters). The ejecta pattern is oriented northwest, consistent with the direction the spacecraft was traveling when it impacted the surface.
"I'm happy that the LROC team was able to confirm the LADEE impact point," said Butler Hine, LADEE project manager at Ames Research Center in Moffett Field, California. "It really helps the LADEE team to get closure and know exactly where the product of their hard work wound up."
LADEE launched Sept. 6, 2013 from Pad 0B at the Mid-Atlantic Regional Spaceport, at NASA's Wallops Flight Facility, Wallops Island, Virginia. LADEE gathered detailed information about the structure and composition of the thin lunar atmosphere and determining whether dust is being lofted into the lunar sky.
LRO launched September 18, 2009. LRO continues to bring the world astounding views of the lunar surface and a sizable collection of lunar data for research.
LRO recently received a second two-year extended mission. Under the extended mission, LRO will study the seasonal volatile cycle; determine how many small meteorites are currently hitting the moon and their effects; characterize the structure of the lunar regolith; investigate the moon’s interaction with the space environment; and reveal more about the lunar interior using observations of the moon’s surface.
“With LRO, NASA will study our nearest celestial neighbor for at least two more years,” said John Keller, LRO project scientist from NASA’s Goddard Space Flight Center in Greenbelt, Maryland. “LRO continues to increase our understanding of the moon and its environment.”
NASA’s Goddard Space Flight Center in Greenbelt, Maryland, manages the LRO mission. NASA's Ames Research Center in Moffett Field, California, designed, built, tested and managed operations for the LADEE mission.
Quelle: NASA
Raumfahrt
« Zum vorherigen Eintrag Zum nächsten Eintrag »
2793 Views
Created with page4