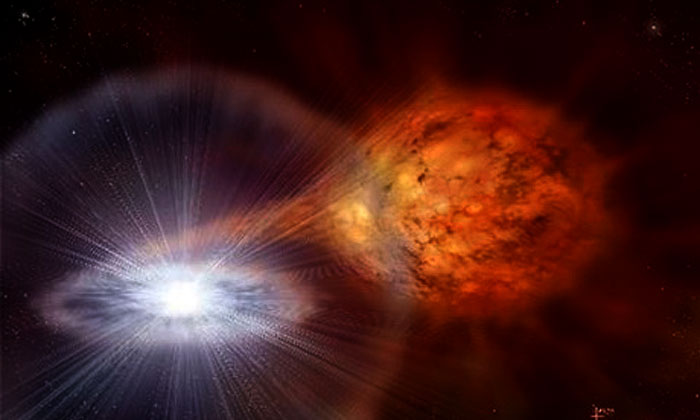 Astronomers capture first ever data of an exploding fireball from a nova star
Researchers reveal the nova was about 14,800 light years from the sun, meaning the explosion witnessed in August last year happened 15,000 years ago
.
A team of astronomers have captured the first images of a thermonuclear fireball from a nova star, allowing them to track the explosion as it expanded.
The nova was detected last year in the constellation Delphinus by the Chara Array infrared telescope in the US.
Researchers from 17 institutions around the world, including the University of Sydney and the Australian National University, analysed the resulting data.
It revealed with “unprecedented clarity” how the fireball evolves as the gas fuelling it expands and cools, Professor Peter Tuthill, a co-author on the study, said.
“We haven’t had the ability to witness such exquisite magnification or high resolution of images until very recently, when we started building these powerful Array telescopes,” Tuthill, from the University of Sydney’s Institute for Astronomy, said.
“These explosions are quite unusual events caused by a white dwarf star, which is a burned-out remnant of a star made of very dense material – a teaspoon full of this stuff weighs tonnes.
“The white dwarf star is like a mosquito that buzzes around the companion star, slowly sucking hydrogen from its companion through a little gravitational straw.”
This created an “ocean” of hydrogen on its surface a few hundred metres thick, Tuthill said, with the pressure at bottom of the ocean eventually reaching critical mass and triggering a thermonuclear explosion called a nova.
“You get a fireball, like a massive hydrogen bomb that propagates outwards,” he said.
Despite the massive detonation, the white dwarf escapes relatively unscathed and continues to circle around its host accumulating more matter so the cycle can repeat again.
Measuring the expansion allowed researchers to establish the nova was about 14,800 light years away from the sun, meaning that the explosion witnessed in August 2013 actually took place nearly 15,000 years ago.
When last measured 43 days after the detonation, the nova had expanded nearly 20-fold, at a velocity of more than 600km per second, the research led by astronomer Gail Schaefer from Georgia State University, found.
Quelle: theguardian
Astronomie
« Zum vorherigen Eintrag Zum nächsten Eintrag »
3224 Views
Created with page4