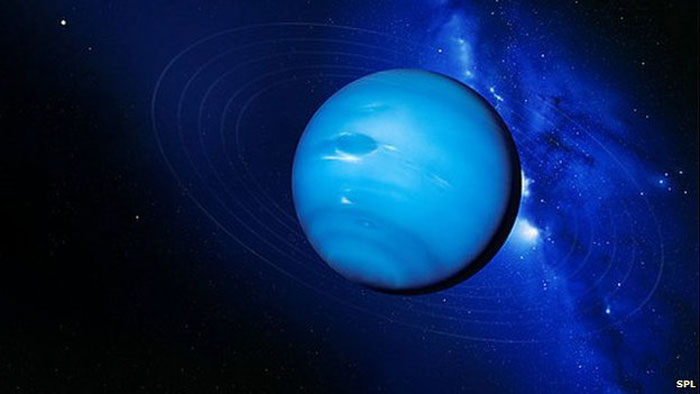 Artwork: The exoplanet HAT-P-11b is four times the size of Earth, or about the same size as Neptune.

A cloud-free atmosphere has allowed scientists to pick out signs of water vapour on a distant planet the size of Neptune: the smallest "exoplanet" ever to reveal its chemical composition.
Previously, only larger, Jupiter-like giants have been studied in this way.
Working with three space telescopes, astronomers deduced the presence of water by measuring the colours of light the planet absorbed when it passed in front of its star.
The find appears in the journal Nature.
It was made by a team of researchers led from the University of Maryland, US.
The planet, designated HAT P-11b, orbits a sun in the constellation Cygnus some 124 light-years - about a quadrillion kilometres - from Earth. It is roughly four times the width of our home world.
The scientists studied the planet's atmosphere with the aid of the US space agency's Hubble, Spitzer and Kepler telescopes.
Their observations were also greatly assisted by there being no clouds on HAT P-11b, which would otherwise have frustrated their attempts to probe its gaseous envelope.
The team determined that the far-off world's atmosphere contained about 90% hydrogen, but also significant quantities of water vapour as well.
Commenting on the findings, Dr Eliza Kempton from Grinnell College, Iowa, said the Maryland group had taken another important step in the study of exoplanets - planets beyond our Solar System.
"Astronomers have detected water vapour in the atmospheres of larger planets - planets that are closer in size to Jupiter. But you can imagine that eventually we want to be able to detect molecules in the atmospheres of even smaller planets.
"We'd like to be able to look at an Earth-sized planet and measure its gaseous composition. So this is a step on the ladder; we're stepping down the ladder towards smaller and smaller planets," she told this week's Science In Action programme on the BBC World Service.
Water has obvious implications for life, although HAT P-11b is too close to its star - and therefore too hot - to be habitable.
But in the future study of Earth-sized exoplanets, the presence of water will be an important consideration as scientists search for biology elsewhere in our galaxy.
Quelle: BBC
.
NASA Telescopes Find Clear Skies and Water Vapor on Exoplanet
. 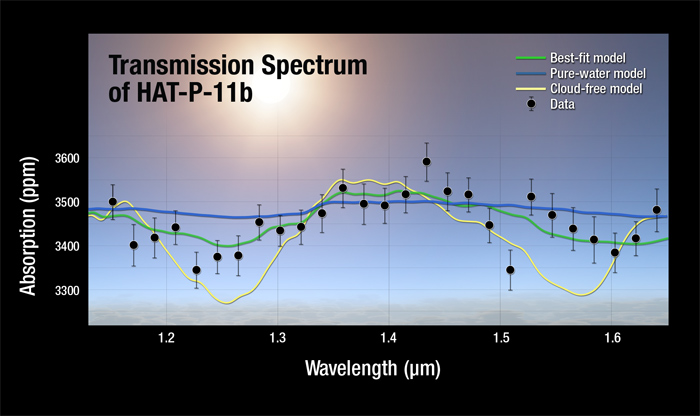 A plot of the transmission spectrum for exoplanet HAT-P-11b, with data from NASA's Kepler, Hubble and Spitzer observatories combined. The results show a robust detection of water absorption in the Hubble data. Transmission spectra of selected atmospheric models are plotted for comparison.
Image Credit: NASA/ESA/STScI
.
Astronomers using data from three of NASA's space telescopes -- Hubble, Spitzer and Kepler -- have discovered clear skies and steamy water vapor on a gaseous planet outside our solar system. The planet is about the size of Neptune, making it the smallest planet from which molecules of any kind have been detected.
“This discovery is a significant milepost on the road to eventually analyzing the atmospheric composition of smaller, rocky planets more like Earth,” said John Grunsfeld, assistant administrator of NASA’s Science Mission Directorate in Washington. “Such achievements are only possible today with the combined capabilities of these unique and powerful observatories.”
Clouds in a planet’s atmosphere can block the view to underlying molecules that reveal information about the planet’s composition and history. Finding clear skies on a Neptune-size planet is a good sign that smaller planets might have similarly good visibility.
"When astronomers go observing at night with telescopes, they say 'clear skies' to mean good luck," said Jonathan Fraine of the University of Maryland, College Park, lead author of a new study appearing in Nature. "In this case, we found clear skies on a distant planet. That's lucky for us because it means clouds didn't block our view of water molecules."
The planet, HAT-P-11b, is categorized as an exo-Neptune -- a Neptune-sized planet that orbits the star HAT-P-11. It is located 120 light-years away in the constellation Cygnus. This planet orbits closer to its star than does our Neptune, making one lap roughly every five days. It is a warm world thought to have a rocky core and gaseous atmosphere. Not much else was known about the composition of the planet, or other exo-Neptunes like it, until now.
Part of the challenge in analyzing the atmospheres of planets like this is their size. Larger Jupiter-like planets are easier to see because of their impressive girth and relatively inflated atmospheres. In fact, researchers already have detected water vapor in the atmospheres of those planets. The handful of smaller planets observed previously had proved more difficult to probe partially because they all appeared to be cloudy.
In the new study, astronomers set out to look at the atmosphere of HAT-P-11b, not knowing if its weather would call for clouds. They used Hubble's Wide Field Camera 3, and a technique called transmission spectroscopy, in which a planet is observed as it crosses in front of its parent star. Starlight filters through the rim of the planet's atmosphere; if molecules like water vapor are present, they absorb some of the starlight, leaving distinct signatures in the light that reaches our telescopes.
Using this strategy, Hubble was able to detect water vapor in HAT-P-11b. But before the team could celebrate clear skies on the exo-Neptune, they had to show that starspots -- cooler "freckles" on the face of stars -- were not the real sources of water vapor. Cool starspots on the parent star can contain water vapor that might erroneously appear to be from the planet.
The team turned to Kepler and Spitzer. Kepler had been observing one patch of sky for years, and HAT-P-11b happens to lie in the field. Those visible-light data were combined with targeted Spitzer observations taken at infrared wavelengths. By comparing these observations, the astronomers figured out that the starspots were too hot to have any steam. It was at that point the team could celebrate detecting water vapor on a world unlike any in our solar system. This discovery indicates the planet did not have clouds blocking the view, a hopeful sign that more cloudless planets can be located and analyzed in the future.
"We think that exo-Neptunes may have diverse compositions, which reflect their formation histories," said study co-author Heather Knutson of the California Institute of Technology in Pasadena. "Now with data like these, we can begin to piece together a narrative for the origin of these distant worlds."
The results from all three telescopes demonstrate that HAT-P-11b is blanketed in water vapor, hydrogen gas and likely other yet-to-be-identified molecules. Theorists will be drawing up new models to explain the planet's makeup and origins.
"We are working our way down the line, from hot Jupiters to exo-Neptunes," said Drake Deming, a co-author of the study also from University of Maryland. "We want to expand our knowledge to a diverse range of exoplanets."
The astronomers plan to examine more exo-Neptunes in the future, and hope to apply the same method to super-Earths -- massive, rocky cousins to our home world with up to 10 times the mass. Although our solar system doesn't have a super-Earth, NASA's Kepler mission is finding them in droves around other stars. NASA's James Webb Space Telescope, scheduled to launch in 2018, will search super-Earths for signs of water vapor and other molecules; however, finding signs of oceans and potentially habitable worlds is likely a ways off.
"The work we are doing now is important for future studies of super-Earths and even smaller planets, because we want to be able to pick out in advance the planets with clear atmospheres that will let us detect molecules," said Knutson.
Once again, astronomers will be crossing their fingers for clear skies.
Quelle: NASA
Astronomie
3298 Views
Created with page4