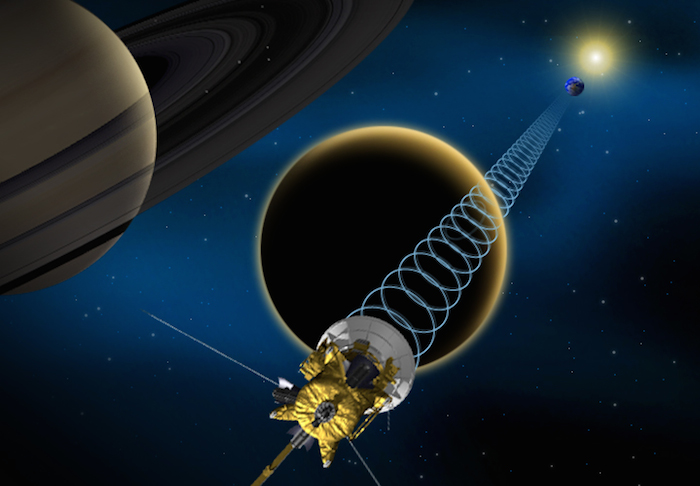 Cassini will attempt to bounce signals off of Saturn's moon Titan once more during a flyby on June 18, 2014, revealing important details about the moon's surface.

As NASA’s Cassini spacecraft zooms toward Saturn’s smoggy moon Titan for a targeted flyby on June 18, mission scientists are excitedly hoping to repeat a scientific tour de force that will provide valuable new insights into the nature of the moon's surface and atmosphere.
For Cassini’s radio science team, the last flyby of Titan, on May 17, was one of the most scientifically valuable encounters of the spacecraft’s current extended mission. The focus of that flyby, designated “T-101,” was on using radio signals to explore the physical nature of Titan’s vast northern seas and probe the high northern regions of its substantial atmosphere.
The Cassini team hopes to replicate the technical success of that flyby during the T-102 encounter, slated for June 18, during which the spacecraft will attempt similar measurements of Titan.  During closest approach, the spacecraft will be just 2,274 miles (3,659 kilometers) above the surface of the moon while travelling at 13,000 miles per hour (5.6 kilometers per second).
During the upcoming flyby, if all goes well as before, Cassini’s radio science subsystem will bounce signals off the surface of Titan, toward Earth, where they will be received by the ground stations of NASA’s Deep Space Network. This sort of observation is known as a bistatic scattering experiment and its results can yield clues to help answer a variety of questions about large areas of Titan’s surface: Are they solid, slushy or liquid? Are they reflective? What might they be made of?
During the May encounter, Cassini beamed radio signals over the two largest bodies of liquid on Titan, seas named Ligeia Mare and Kraken Mare. During that first attempt, scientists could not be certain the signals would successfully bounce off the lakes to be received on Earth. They were thrilled when ground stations received specular reflections -- essentially the glint -- of the radio frequencies as they ricocheted off Titan.
“We held our breath as Cassini turned to beam its radio signals at the lakes,” said Essam Marouf, a member of the Cassini radio science team of San Jose State University in California. “We knew we were getting good quality data when we saw clear echoes from Titan’s surface. It was thrilling.”
A second technical accomplishment -- an experiment to send precision-tuned radio frequencies through Titan’s atmosphere -- also makes the May and June flybys special. The experiment, known as a radio occultation, provides information about how temperatures vary by altitude in Titan’s atmosphere. Preparing for these experiments tested just how thoroughly the Cassini team has come to understand the structure of Titan’s atmosphere during nearly a decade of study by the mission.
During this type of radio occultation, a signal is beamed from Earth through the atmosphere of Titan toward the Cassini spacecraft, which responds back to Earth with an identical signal. Information about Titan is imprinted in the signal as it passes through the moon’s atmosphere, encountering differences in temperature and density. The trick is that the transmitted signal must be varied during the experiment so that it remains nearly constant when received by the spacecraft.
In order to give the occultation experiments any chance of success, the team has to account for not only the relative motions of the spacecraft and the transmitting antennas on the rotating planet Earth, but also the ways the signal is bent by different layers in Titan’s atmosphere.
While this procedure has been used successfully for several Saturn occultations in the past two years, it had not yet been tried at Titan. And since the Titan occultations last just a few minutes, the team was concerned about how quickly the frequency lockup between ground and spacecraft could be established, if at all. For comparison, NASA’s Magellan mission tried the technique at Venus in the 1990s, without success.
As they waited for signs of confirmation during the May encounter, the team saw the signal lock occur in only a few seconds, indicating that their predictions were spot-on. Data on Titan’s atmosphere flowed in, adding new information to the mission’s campaign to monitor the changing of the seasons on this alien moon.
“This was like trying to hit a hole-in-one in golf, except that the hole is close to a billion miles away, and moving,” said Earl Maize, Cassini project manager at NASA’s Jet Propulsion Laboratory in Pasadena, California. “This was our first attempt to precisely predict and compensate for the effect of Titan’s atmosphere on the uplinked radio signal from Earth, and it worked to perfection.”
The Cassini-Huygens mission is a cooperative project of NASA, the European Space Agency and the Italian Space Agency. JPL, a division of the California Institute of Technology, Pasadena, manages the mission for NASA's Science Mission Directorate in Washington. The radio science team is based at JPL. NASA’s Deep Space Network is also managed by JPL.
. 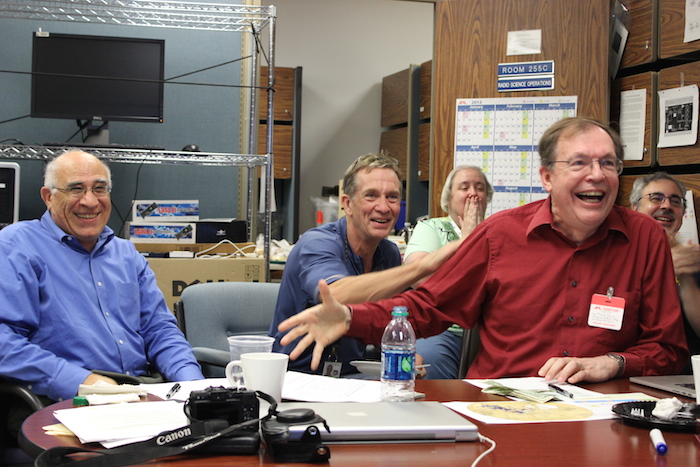 Cassini team members react with excitement to the successful receipt of radio signals bounced off of Titan during a flyby on May 17, 2014.
. 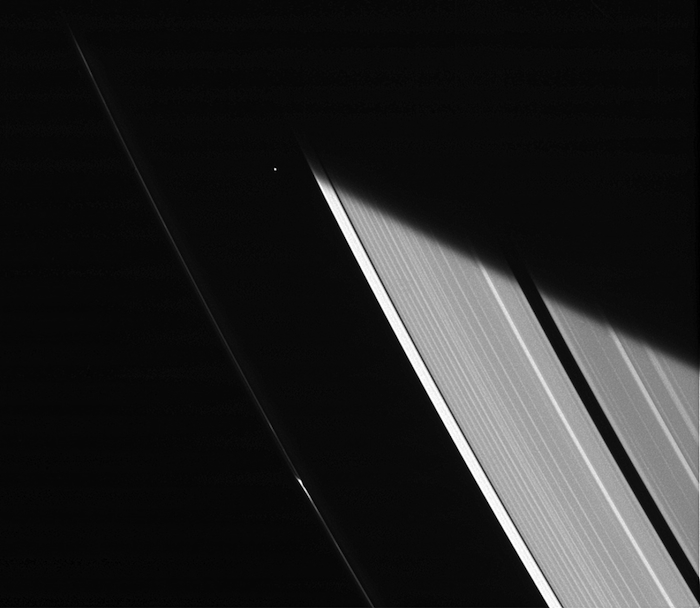 Emerging from Darkness
The Cassini spacecraft captures a glimpse of the moon Atlas shortly after emerging from Saturn's shadow. Although the sunlight at Saturn's distance is feeble compared to that at the Earth, objects cut off from the Sun within Saturn's shadow cool off considerably.
Scientists study how the moons around Saturn cool and warm as they enter and leave Saturn's shadow to better understand the physical properties of Saturn's moons.
This view looks toward the sunlit side of the rings from about 44 degrees above the ringplane. The image was taken in visible light with the Cassini spacecraft narrow-angle camera on Jan. 23, 2014.
The view was acquired at a distance of approximately 1.6 million miles (2.6 million kilometers) from Atlas and at a Sun-Atlas-spacecraft, or phase, angle of 93 degrees. Image scale is 10 miles (16 kilometers) per pixel.
The Cassini-Huygens mission is a cooperative project of NASA, the European Space Agency and the Italian Space Agency. The Jet Propulsion Laboratory, a division of the California Institute of Technology in Pasadena, manages the mission for NASA's Science Mission Directorate, Washington, D.C. The Cassini orbiter and its two onboard cameras were designed, developed and assembled at JPL. The imaging operations center is based at the Space Science Institute in Boulder, Colo.
Quelle: NASA
.
Update: 23.06.2014
.
Geheimnisvolle  'Magic Island' auf Saturn-Mond Titan
.
Astronomers have discovered a bright, mysterious geologic object – where one never existed – on Cassini mission radar images of Ligeia Mare, the second-largest sea on Saturn’s moon Titan. Scientifically speaking, this spot is considered a “transient feature,” but the astronomers have playfully dubbed it “Magic Island.”
. 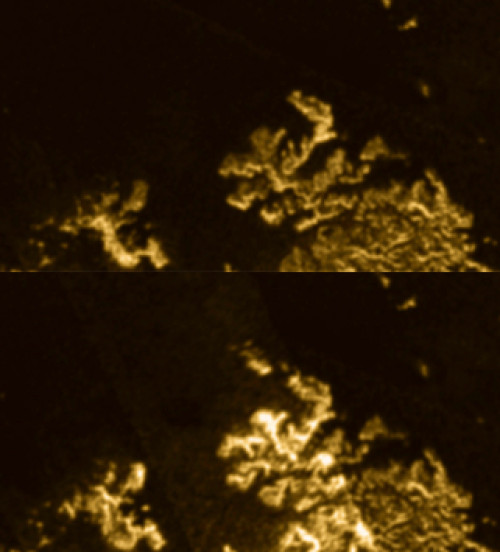 Top: Ligeia Mare, the second largest sea on the Saturn moon Titan, sports its usual coastline in this image. Bottom: A mysteriously bright object appears on Ligeia Mare.
Credit: NASA/JPL-Caltech/Cornell
.
Now you don't see it. Now, you do. And now you don't see it again. Astronomers have discovered a bright, mysterious geologic object -- where one never existed -- on Cassini mission radar images of Ligeia Mare, the second-largest sea on Saturn's moon Titan. Scientifically speaking, this spot is considered a "transient feature," but the astronomers have playfully dubbed it "Magic Island."
Reporting in the journal Nature Geoscience June 22, the scientists say this may be the first observation of dynamic, geological processes in Titan's northern hemisphere. "This discovery tells us that the liquids in Titan's northern hemisphere are not simply stagnant and unchanging, but rather that changes do occur," said Jason Hofgartner, a Cornell University graduate student in the field of planetary sciences, and the paper's lead author. "We don't know precisely what caused this 'magic island' to appear, but we'd like to study it further."
Titan, the largest of Saturn's 62 known moons, is a world of lakes and seas. The moon -- smaller than our own planet -- bears close resemblance to watery Earth, with wind and rain driving the creation of strikingly familiar landscapes. Under its thick, hazy nitrogen-methane atmosphere, astronomers have found mountains, dunes and lakes. But in lieu of water, liquid methane and ethane flow through riverlike channels into seas the size of Earth's Great Lakes.
To discover this geologic feature, the astronomers relied on an old technique -- flipping. The Cassini spacecraft sent data on July 10, 2013, to the Jet Propulsion Laboratory at the California Institute of Technology for image processing. Within a few days, Hofgartner and his colleagues flipped between older Titan images and the newly processed pictures for any hint of change. This is a long-standing method used to discover asteroids, comets and other worlds. "With flipping, the human eye is pretty good at detecting change," said Hofgartner.
Prior to the July 2013 observation, that region of Ligeia Mare had been completely devoid of features, including waves. Titan's seasons change on a longer time scale than Earth's. The moon's northern hemisphere is transitioning from spring to summer. The astronomers think the strange feature may result from changing seasons.
In light of the changes, Hofgartner and the other authors speculate on four reasons for this phenomenon:
• Northern hemisphere winds may be kicking up and forming waves on Ligeia Mare. The radar imaging system might see the waves as a kind of "ghost" island.
• Gases may push out from the sea floor of Ligeia Mare, rising to the surface as bubbles.
• Sunken solids formed by a wintry freeze could become buoyant with the onset of warmer temperatures during the late Titan spring.
• Ligeia Mare has suspended solids, which are neither sunken nor floating, but act like silt in a terrestrial delta.
"Likely, several different processes -- such as wind, rain and tides -- might affect the methane and ethane lakes on Titan. We want to see the similarities and differences from geological processes that occur here on Earth," Hofgartner said. "Ultimately, it will help us to understand better our own liquid environments here on the Earth."
In addition to Hofgartner, Cornell authors include: Alex Hayes, assistant professor of planetary sciences; Jonathan Lunine, professor of physical sciences; and Phil Nicholson, professor of astronomy. A portion of the research was performed at the Jet Propulsion Laboratory, under a contract with NASA.
Quelle: SD
.
Update: 22.10
. 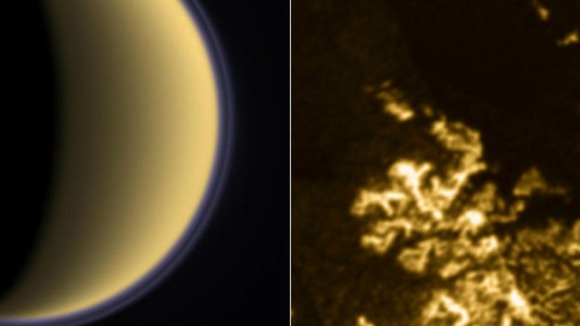 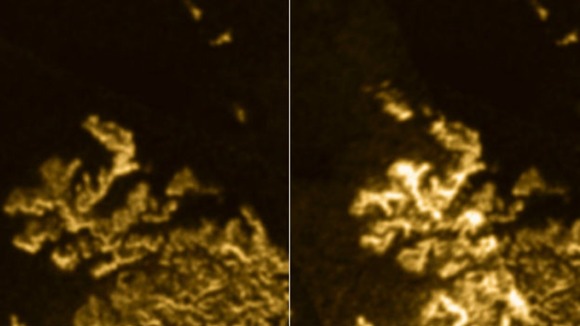 Titan sea Ligeia Mare sports its usual coastline in the image on the left, while the image on the right shows a mysteriously bright object. Credit: NASA
Planetary scientist Jason Hofgartner, from Cornell University in New York, said: "This discovery tells us that the liquids in Titan's northern hemisphere are not simply stagnant and unchanging, but rather that changes do occur.
"We don't know precisely what caused this 'magic island' to appear, but we'd like to study it further."
The object was captured by the Cassini space probe, but it had disappeared in later images, said the researchers, writing in the journal Nature Geoscience.
Titan has large expanses of liquid on its surface, but unlike on Earth, they are formed by flowing rivers of liquid methane and ethane.
Quelle:itv