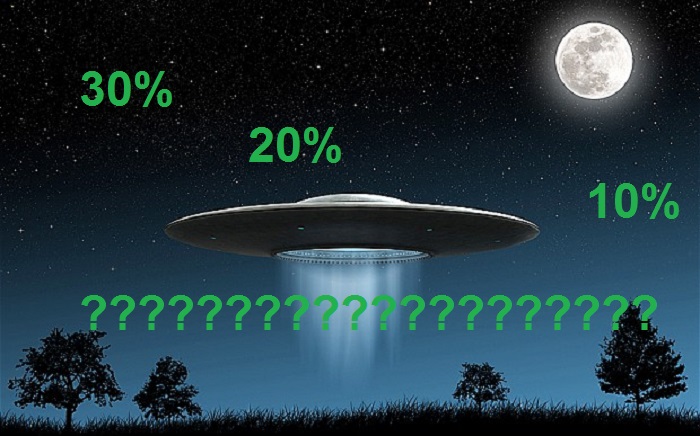 There recently has been some discussion about the percentage of UFO reports that are IFOs. I discussed this in my last issue when I answered Stanton Friedman’s complaint that a 90% IFO rate was a “ridiculous proclamation”. This surfaced again and it seems that a certain percentage of UFOlogists claim that the IFO rate is more like 50-80% depending on who is talking. I found these numbers interesting because I would think the one organization that would know the IFO rate would be MUFON, who investigates UFO reports. They give the number of over 90% on their web site.
This really seems like a numbers game to me. UFOlogists seem to want there to be more “genuine” or “true” UFOs, which is why they work hard to only accept the statistics that support their conclusion. I really could care less if the IFO rate is 50, 80, 90, 95, or 99%. I think that UFOlogists really have not figured out what the low IFO numbers imply.
For instance, let’s assume the number for IFOs is 75%. That means that in any large number of UFO reports, we should expect to see 25% of them being observations of inexplicable craft. In 2011, the National UFO Reporting Center (NUFORC) had over 5000 reports. If we assume that the other UFO centers (MUFON, CUFOS, independent investigators, etc) have a combined number of reports equal to this, that means there are roughly 10,000 UFO reports filed every year. With the value of 25%, that means 2,500 cases are actual sightings of “unknown craft operating under intelligent control” (UCOUIC). These are only the observations that are reported. There may be a hidden number of UCOUICs that were not reported. Even with 2500 events, that is an average of almost seven events a day. With such a large number of UCOUICs in the skies over the United States, one wonders why none have been convincingly recorded or photographed. The lack of convincing evidence for all of these UCOUICs inhabiting the sky implies that the “unknowns” in any database can not all be UCOUICs. If this is so, doesn’t this mean that some (possibly a majority) of the unexplained UFO reports really are IFOs yet to be identified?
I look at the NUFORC and MUFON databases pretty regularly and I see a lot of cases that probably can not be explained to many UFOlogists satisfaction. Many of the reports are missing a lot of information that might reveal the IFO that caused them. One can suggest probable explanations (Chinese lanterns, aircraft, stars, meteors, etc.) but it is very hard to pin down simply because there is not enough information. I certainly do not see a significant number of these reports indicating that UCOUICs are operating in the Earth’s atmosphere.