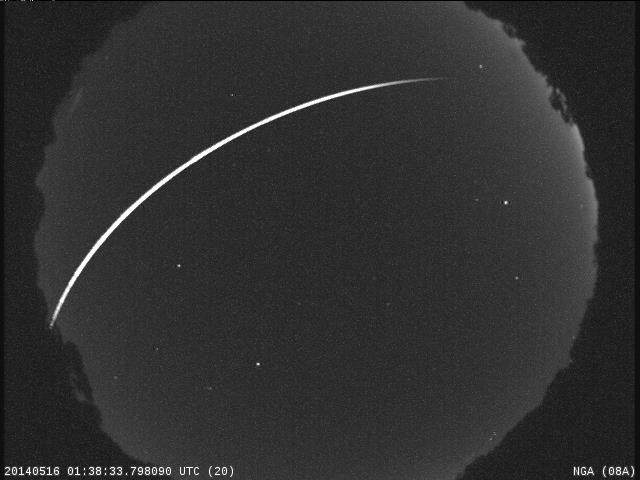 Earthgrazer meteors skim along the upper part of the atmosphere before burning up. This one travelled a distance of 290 miles, quite rare for a meteor. Image released May 16, 2014.
Credit: Marshall Space Flight Center Meteoroid Environment Office

A rare, long-lasting fireball streaked through the skies of the southeastern United States Thursday night (May 15), putting on a show for stargazers lucky enough to see it from the ground.

The space rock entered Earth's atmosphere above Columbia, South Carolina. The basketball-sized meteoroid then moved northwest at about 78,000 mph (125,500 km/h), burning up above Tennessee, according to a statement from Bill Cooke of NASA's meteoroid environment office at Marshall Space Flight Center in Alabama. NASA's skyward-pointing cameras captured an amazing video of the long-duration fireball.

"This fireball was not part of any meteor shower and belongs to a class of meteors called Earthgrazers," Cooke wrote in the statement. "These meteors skim along the upper part of the atmosphere before burning up. This one travelled a distance of 290 miles [467 km], which is quite rare for a meteor."

While this fireball is not part of any meteor shower, it does come one week before a new meteor shower is expected to grace the skies. The never-before-seen Camelopardalid meteor shower should peak overnight on May 23 and 24 as Earth passes through a stream of debris left behind by Comet 209P/LINEAR.

Meteor showers happen when Earth passes through streams of dust and gast sloughed off by cosmic bodies. The debris enters the atmosphere, burning up and creating the light flashes that are sometimes called shooting stars.

A bit of space debris still in space is known as a meteoroid. If that piece of a comet or asteroid enters Earth's atmosphere, it's called a meteor, and any bit of rock that makes it to the planet's surface is dubbed a meteorite. 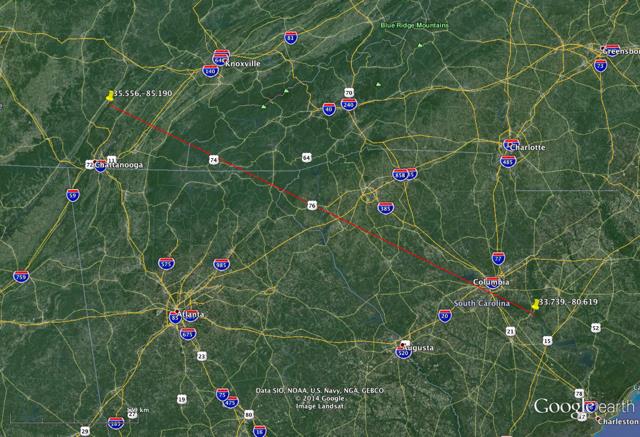 This map shows the path of the Earthgrazer meteor as it flew over South Carolina and Tennessee on May 16, 2014.
Credit: Marshall Space Flight Center Meteoroid Environment Office

A basketball-sized Earthgrazer meteor, not part of any meteor shower, entered Earth's atmosphere at 78,000 mph above Columbia, South Carolina and burned up just north of Chattanooga, Tennessee. It traveled a total of 290 miles, a rare feat for a meteor. 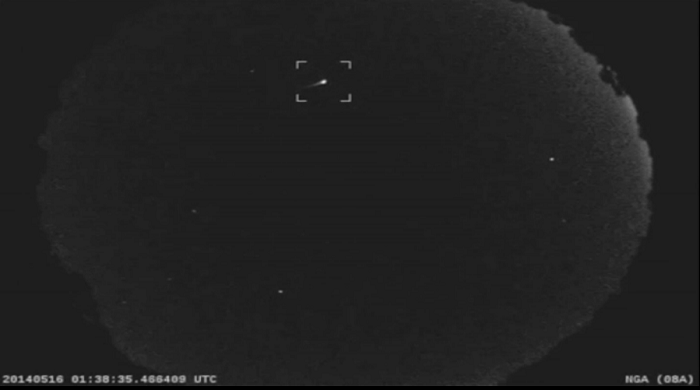 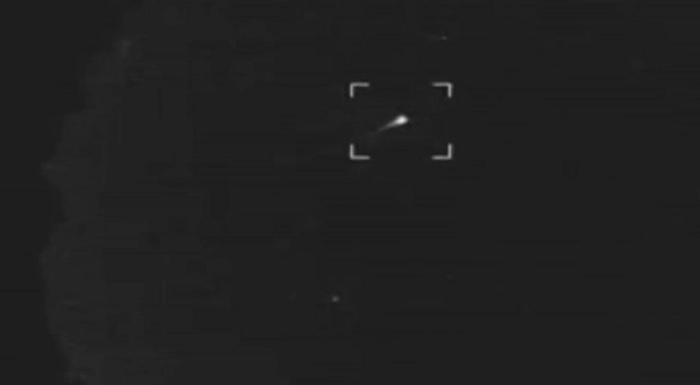