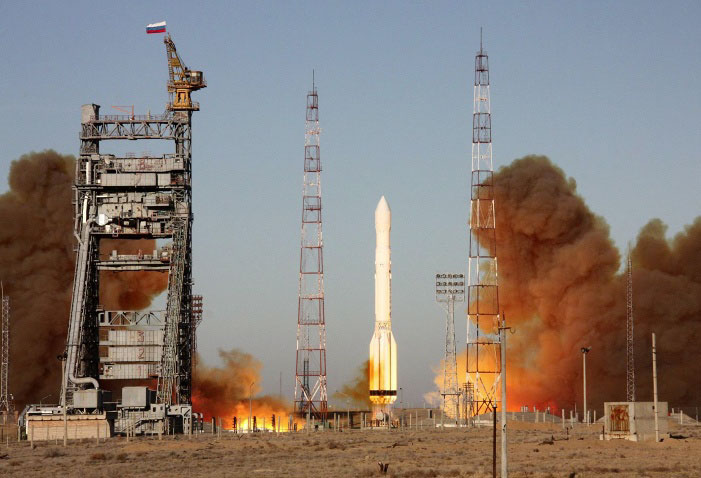 The carrier rocket Proton-M, which was launched from Baikonur together with the communications satellite Express-AM4R, has burnt up in the dense layers of the atmosphere, an official of Russia's Federal Space Agency has told Itar-Tass.
"Some small fragments of the rocket could fall onto Earth. An impact area is being ascertained," the space official said. According to the data given by him, the engine of the third stage of the carrier rocket failed at an altitude of 161 km because of deviation of the Proton-M from the flight path. "There was an angle-and-bank error," he said.
According to the source, the toxic components of the rocket fuel remaining in the third stage of the Proton and the booster unit Briz-M most likely burned up in the dense layers of the atmosphere. Satellites of the Exress series have been insured for 2.5 billion roubles.
Contact was lost in the 540th second
An emergency cutout of the propulsion unit of the Proton-M carrier rocket occurred between the separation of the second and third stages, an official at Roscosmos (Russia's Federal Space Agency) has told Itar-Tass."Contact with the carrier rocket was lost in the 540th second after liftoff," the official specified, adding, "It is known that the nose cone did not separate from the rocket". Third-stage engines for Proton space rockets are manufactured at the Voronezh-based OAO "Khimavtomatika Design Bureau" (KBKhA) space-rocket industry enterprise.
The carrier rocket Proton-M was to deploy into orbit the highest-powered and technologically effective commsat which was intended to become a third spacecraft of the Express series launched in 2014.
Non-deployment of the satellite
The non-deployment of the communications satellite Express-AM4R into orbit was caused by an abnormal situation, Irina Zubareva, press secretary of the Roscosmos director, told Itar-Tass on Friday.
"An abnormal situation developed during the insertion in the operation of the third stage of the carrier rocket, and the spacecraft Express-AM4R was not deployed into orbit. State commission members are now busy analyzing telemetric data, seeking to find out the causes of the abnormal situation," she said.
Where did fragments of Proton-M fall
Fragments of the carrier rocket could fall in unforeseen debris impact areas, a space industry source has told Itar-Tass. "In any case, Proton-M rocket fragments did not fall in the grounds of Baikonur, or in general in the territory of Kazakhstan. Most probably, this happened (when the rocket was) already far away, in an off-normal impact area," the source said."All the causes and a possible impact area are being ascertained. No information has been received from Baikonur so far, since people monitoring the Proton-M liftoff are in a bunker at the moment of liftoff proper," the source specified. He added, "The breakdown occurred during the operation of the third stage of the carrier rocket, prior to the acceleration unit's separation".
"The Proton-M carrier rocket at this moment is most likely in a non-intended orbit. The propulsion unit emergency cutout, which happened in the 540th second (of the flight) during the operation of the third stage, was not necessarily to result in its fall," a source at Russia's Federal Space Agency has told Itar-Tass.
Quelle: ITARTASS
. 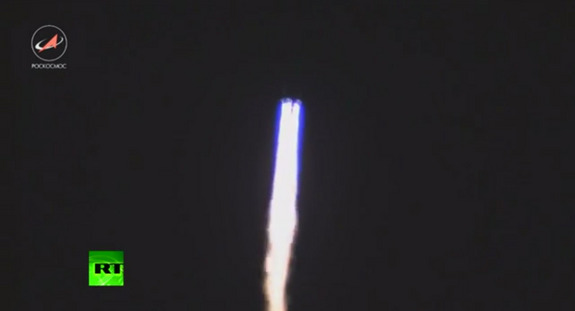 A Russian Proton rocket carrying the advanced Express AM4R satellite launches off a pad at Baikonur Cosmodrome, Kazakhstan early Friday (May 16) local time in this still image from a Russia Today news video. The rocket reportedly crashed back to Earth nine minutes after liftoff.
.
A Russian rocket crashed Friday (May 16) while attempting to launch an advanced communications satellite into orbit, according to Russian media reports.
The unmanned Russian Proton-M rocket went down nine minutes after blasting off from Baikonur Cosmodrome in Kazakhstan on Friday local time (late Thursday, May 15 Eastern Daylight Time), Russia's Itar-Tass news agency reported. The rocket was carrying the Express-AM4R satellite, a powerful craft designed to provide affordable Internet access to people living in remote parts of Russia.
The accident was first reported by Russia Today, Itar-Tass and Ria Novosti.
"Contact with the carrier rocket was lost in the 540th second after liftoff," said an official with Russia's federal space agency, known as Roscosmos, according to Itar-Tass. "It is known that the nose cone did not separate from the rocket."
There are no reports at this time of any injuries or damage resulting from the crash, according to Russia Today. Future launches of Proton-type vehicles from Baikonur will be grounded until investigators determine the cause of the crash, the outlet added, citing reports by Ria Novosti.
Today's crash marks the sixth major failure in the last 3 1/2 years for the Proton, a family of launchers that has been in use since the mid-1960s. The last Proton rocket failure occurred in July 2013, when a Proton-M rocket carrying three satellites for Russia's Glonass navigation system crashed shortly after liftoff.
The Proton-M is a 174-foot-tall (53 meters) heavy lifter with three main stages. Many of the rocket's launches also feature a fourth stage, known as the Breeze-M.
The Express-AM4R satellite, which weighed 5.8 metric tons and had 63 transponders on board, was billed as Russia's most advanced telecommunications satellite, Russia Today reported. It was to be the third Express series satellite to reach orbit this year; a Proton-M delivered Express AT1 and Express AT2 to space in March.
Quelle: SC
.
Frams von Proton-M-Fehlstart
.

Quelle: Roscosmos / RT
.
Update:
.
Altai have seen no Proton-M debris as of yet
BARNAUL. The Altai territory and the Republic of Altai have no information as of yet about the possible fall to their territories of debris of a Proton-M launch vehicle, which crashed early on Friday morning.
The press center of the Republic of Altai department of the Federal Service for Supervision of Consumer Rights Protection and Human Well-Being (Rospotrebnadzor) told Interfax the information about the possible fall of rocket debris in the area had not been confirmed.
"We have called every district and Emergency Situations Ministry services and none of them confirms the fall of debris to our territory. There is information that the debris fell outside of our territory, much farther," the press center said.
The Russian Emergency Situations Ministry department in the Altai territory does not possess information about the possible fall of rocket debris there either.
"We have no information about the fall of debris in our region. We do not possess such information so far," the department press center told Interfax.
Reportedly, the Express-AM4R telecom satellite launched from Baikonur early on Friday morning might have fallen to Altai or the Amur region. That was the tenth space launch conducted by Russia in 2014. All the previous missions of the year were successful.
Quelle: Interfax
« Zum vorherigen Eintrag Zum nächsten Eintrag »
3488 Views
Created with page4