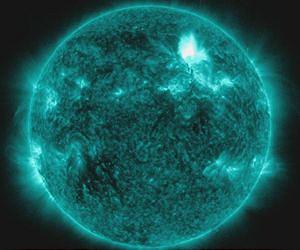 The SDO project is a part of the NASA program "Living With the Star" (LWS), aimed at studying solar-terrestrial relations, that is, the mechanisms through which the Sun's activity changes the situation on the Earth; and it is also a part of its "extended", international version - ILWS, which includes spacecrafts of different countries. The CORONAS-Photon was a part of the ILWS, too.

Russian scientists have gained access to the data of the SDO solar observatory (NASA). The SDO Data Center is created in the Lebedev Physical Institute of the RAS. After the untimely breakdown of the CORONAS-Photon solar observatory at the end of 2009, Russia has not gotten its own solar research satellites, and the next project in this area, Intergelio-Zond, is expected to be carried out only after 2015.

NASA's SDO (Solar Dynamics Observatory) project has been working in the geosynchronous orbit since February, 2010. The task of the scientific complex consisting of three devices on board the satellite was almost constant observation of the Sun in a wide range of wavelengths, as well as the monitoring of changes that are happening to our star (hence the name of the project).

About a year after the launch of the observatory in April, 2011, Roscosmos and NASA signed an agreement on cooperation in heliophysics. According to it, the Russian Space Agency undertook the task of giving NASA the data archive from the Russian CORONAS-Photon solar Observatory, which operated from January to December 2009 (the actual period of obtaining scientific data was even less). In exchange, NASA was to provide Russian specialists with access to the SDO's information in the real-time operation mode.

The CORONAS-Photon worked in orbit for less than a year; at the end of 2009 the observatory went out of operation due to defects in the power supply system. It was the third spacecraft of the CORONAS series of solar observatories and up to now, the last Russian space project connected with the study of the Sun.

According to the plan, it was to operate during the period of the Sun's going out of the protracted minimum activity, but in reality it turned out that the spacecraft collected very little of the data. This archive was handed to NASA about six months ago reports Sergey Bogachev, researcher of the laboratory of x-ray astronomy of the Sun of the LPI RAS.

In exchange for this data, researchers of the LPI RAS got access to all the data of the SDO Observatory without a prior request in the real-time operation mode. Sergey Bogachev emphasizes that the LPI RAS must not only receive the data, but also facilitate their spreading through the Russian SDO center (web-site of the Russian centre - http://sdo.lebedev.ru). The agreement between the agencies provides that the Russian center will enjoy this support during the whole period of the Observatory's work, that is, at least up to 2015, and possibly longer, if it is decided to extend the mission.

The SDO project is a part of the NASA program "Living With the Star" (LWS), aimed at studying solar-terrestrial relations, that is, the mechanisms through which the Sun's activity changes the situation on the Earth; and it is also a part of its "extended", international version - ILWS, which includes spacecrafts of different countries. The CORONAS-Photon was a part of the ILWS, too.

The launch of the next Russian space project related to the research of the Sun is scheduled for 2015 at the earliest. This will be the Intergelio-Zond spacecraft, which has two important tasks: to approach the Sun at a distance of about 40 solar radii (about 27 million km; for comparison, in the closest point of its orbit, Mercury is at approximately 46 million km distance from the Sun) and "to have a look" at the polar areas of the Sun (by means of the inclination of the orbit) - until now this was done only by the Ulysses spacecraft (NASA).

The leading organizations of the project are the Pushkov Institute of Magnetism, Ionosphere and Radio Waves Propagation of the RAS and Lavochkin Research and Production Association. today, the project is in the initial stage of experimental-design work. After the approval of the draft project by the scientific-technical Council of the Federal Space Agency Roscosmos, it was agreed to consider the possibility of creating two spacecrafts in order to increase the mission's reliability and extend the scientific programme.

The next solar project, "Polar-ecliptical patrol", provides for the placing of two spacecraft into orbits, located at an angle to the plane of the ecliptic, to watch the Sun at "unusual" angles. As opposed to Intergelio-Zond, these spacecrafts will be placed only halfway from the Earth to the Sun. However, the precise terms of realization of this mission are still not determined.

The break in the solar and magnetospheric studies is uncharacteristic for the Russian space program: even in the 1990s, spacecrafts of the Interbol project and the CORONAS series were working in this field.

In fact, today, only the Plasma-F instrument complex is functioning aboard the Spektr-R observatory and the Resonance multi-satellite project, designed for the study of processes in the Earth's magnetosphere, is getting ready for launch in 2014. They are also included in the ILWS program. However, in the next few years there will be no Russian solar observatories, therefore, the agreement on the use of the SDO data is particularly interesting.