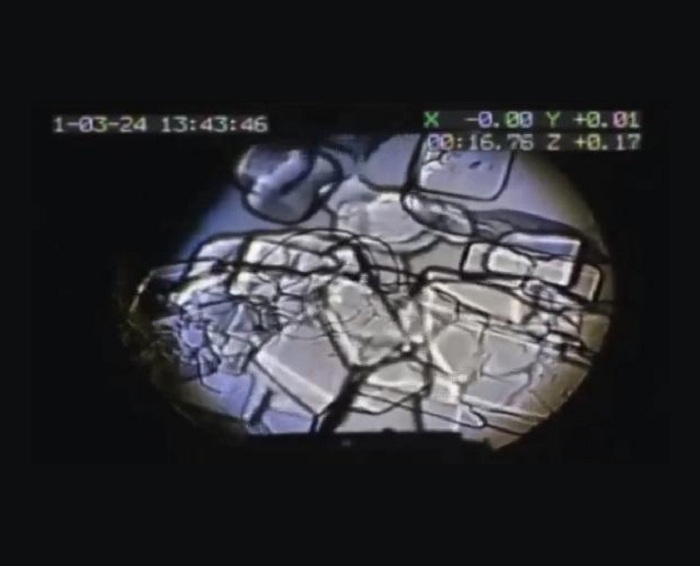 Japanese researchers have successfully grown helium crystals in a microgravity environment, using acoustic waves, providing an opportunity to study the dynamics of how such crystals form in much shorter time frames than can be done in terrestrial labs, and perhaps shed light on the underlying fundamental physics. Their results appeared earlier this month in the New Journal of Physics.

ANALYSIS: Spacetime Crystal Could Be a Reality

Airplanes have been used since 1959 to provide a nearly weightless environment -- mimicking the microgravity of space -- in which to train astronauts and conduct research. They have colorful nicknames like "Vomit Comet" or NASA's "Weightless Wonder."

Such an aircraft flies in a long parabolic arc, first climbing, then entering into a dive. By controlling the propulsion and steering, it's possible to cancel out any drag (air resistance), at least for about 25 seconds or so.

In that time, passengers on the craft feel as if they are free-falling in a vacuum -- as close to weightlessness as it is possible to achieve without venturing into space. And various experiments have been performed to study phenomena in this unique environment.

ANALYSIS: Silicon Crystals Could Be In The LHC Driving Seat

NASA has sponsored research in studying crystal formation in microgravity since the 1970s during the Skylab missions. Crystals are vital components in much of modern technology, including microchips, video cameras, radiation detectors, digital watches, and semiconductors.

But in order to be used in many of these applications, the crystals can't have too many defects. A better understanding of the processes by which they form would enable scientists to better control those growth conditions. Microgravity environments give scientists control over one important variable, gravity, so they can study how the process is altered under changing circumstances.

The Japanese researchers, from the Tokyo Institute of Technology, used a small jet plane provided by the Japan Aerospace Exploration Agency (JAXA) to perform eight experiments on crystals during a two-hour flight.

They used a common growth process called Ostwald ripening, in which larger crystals continue to grow at the expense of smaller crystals. It often occurs in ice cream, making the frozen treat become crunchier over time.

The TIT team built a special refrigerator for the plane with a windows so they could watch the crystal formation in action. Then they placed large helium crystals in the bottom of a vacuum chamber and increased the pressure. When the crystals were zapped with acoustic waves, they crumbled into tiny pieces.

Normally it takes a long time to form crystals via Ostwald ripening -- unless you have access to a superfluid. The crystal pieces were splashed with a helium-4 superfluid -- a special state of matter with no viscosity, meaning it can flow without friction.

Per the paper's lead author, Ryuji Nomura, "Helium crystals can grow from a superfluid extremely fast because the helium atoms are carried by a swift superflow, so it cannot hinder the crystallization process." The low temperatures and high pressure in a microgravity environment didn't hurt, either.

In the end, only one 10-mm crystal survived -- much larger than is usually achieved via this process, and featuring clear, well-ordered facets. As the scientists concluded in their abstract, "Gravity-free 4He crystals are now reality."