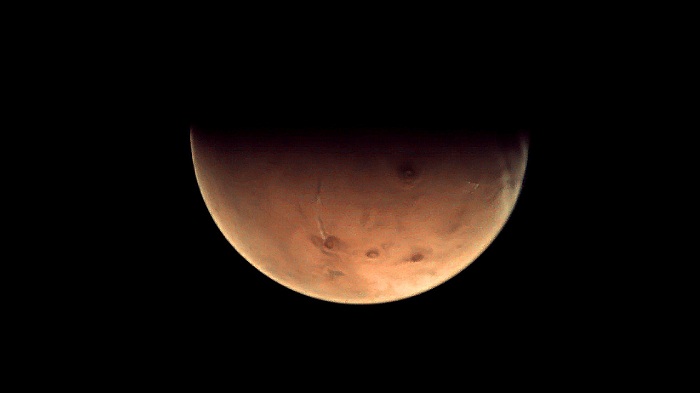 This Mars photo from ESA's Mars Express spacecraft was taken on Dec. 15, 2012, and beamed to Earth on Dec. 18. The spacecraft was 9.761 kilometers from Mars at the time.
CREDIT: ESA

Europe's newest deep-space tracking station has received its first interplanetary message: a photo of a half-lit Mars as seen by an orbiting spacecraft.

The new Mars photo was snapped by the European Space Agency's Mars Express probe and beamed to Earth on Dec. 18, where it was received by the agency's brand-new space tracking station in Malargüe, Argentina. Argentina's President Cristina Fernández de Kirchner activated the huge antenna dish via a remote link from the country's Casa Rosada presidential palace to commemorate the event, ESA officials said.

In the Mars photo, the Red Planet appears to lie on its side with its daytime side facing down. Three huge volcano domes can be easily seen in the view, as well as several canyons etched into the Martian landscape. The Mars Express spacecraft used its low-resolution Visual Monitoring Camera to capture the image from a distance of 6,065 miles (9,761 kilometers).