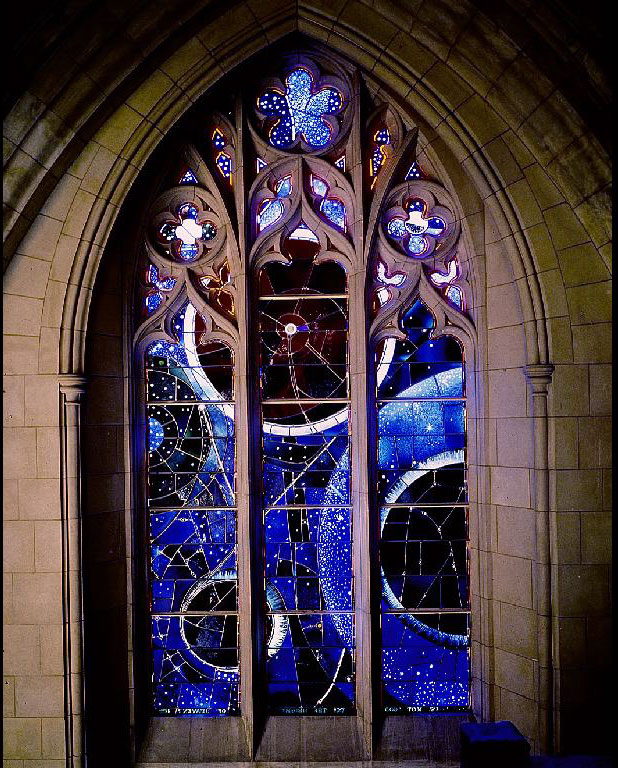 First Man on the Moon Remembered for 'Courage, Grace and Humility'
Former Apollo astronauts, NASA Administrator Charles Bolden, and other dignitaries gathered at Washington's National Cathedral on Thursday, Sept. 13, to pay tribute to Neil Armstrong, the Apollo 11 commander and first man on the moon, who died on August 25.
"Neil will always be remembered for taking humankind's first small step on another world," said Administrator Bolden. "But it was the courage, grace and humility he displayed throughout his life that lifted him above the stars."
"Neil Armstrong left more than footprints and a flag on the moon," Bolden added. "He left a foundation for the future and paved the way for future American explorers to be the first to step foot on Mars or another planet."
› Read Administrator Bolden's Full Remarks | › Share Your Thoughts
Armstrong's Apollo 11 crewmates Michael Collins and Buzz Aldrin, Eugene A. Cernan, the Apollo 17 mission commander and last man to walk on the moon, and John Glenn, the former Senator and first American to orbit the Earth, also attended the service. Cernan joined Administrator Bolden and former Secretary of the Treasury John W. Snow in offering tributes, while Collins lead prayers. The popular jazz singer-songwriter Diana Krall performed "Fly Me to the Moon." The U.S. Navy Band "Sea Chanters," the Cathedral Choir, and the Metropolitan Opera Brass also performed, and The Right Rev. Mariann Edgar Budde, bishop of Washington, offered the homily in honoring Armstrong's life.
› Memorial Service Program (365 KB PDF)
'It was never about Neil'
"In Neil's mind, it was never about Neil," said Apollo 17 Commander Gene Cernan. "It was about you, your mothers and fathers, your grandparents, those of an earlier generation, who gave him the opportunity to walk on the moon. . . . He always gave credit to those who just didn't know it couldn't be done."
"He knew who he was and he understood the immensity of what he had done. Yet Neil was always willing to give of himself," said Cernan, who told of trips that he, Armstrong and Apollo 13 commander Jim Lovell made to visit troops in Afghanistan and Iraq.
"Those young men and women, who had yet to be born when Neil walked on the moon, greeted him with enthusiasm," said Cernan. "They asked him, 'Why are you here?' Neil's honest and thoughtful reply was, 'Because you are here'."
Giant Leap for Mankind
Armstrong's words "That is one small step for (a) man, one giant leap for mankind," spoken on July 20, 1969, as he became the first person ever to step onto another planetary body, instantly became a part of history.
Those few words from the Sea of Tranquillity were the climactic fulfillment of the efforts and hopes of millions of people and the expenditure of billions of dollars. A plaque on one of the lander's legs that concluded "We came in peace for all mankind," further emphasized that Armstrong and fellow astronaut Edwin "Buzz" Aldrin were there as representatives of all humans.
Washington National Cathedral is called to be the spiritual home for the nation and brings the country together at important moments to pray, commemorate, celebrate, and mourn. The Cathedral has also long worked to recognize NASA and our country's space program. Armstrong, along with fellow astronauts Buzz Aldrin and Michael Collins, presented the Cathedral with a moon rock brought back from their Apollo 11 mission. The presentation took place in a service on July 21, 1974, commemorating the fifth anniversary of the first steps on the moon. The iconic Space Window that would later display the sample of lunar rock was also dedicated at that service.
On October 23, 1983, astronauts Collins and Capt. Frederick H. Hauck took part in a service to celebrate the twenty-fifth anniversary of NASA at the Cathedral. The Cathedral was also the location of a memorial service on February 6, 2003, for the crew of Space Shuttle Columbia, who had died during reentry into the Earth's atmosphere.
- 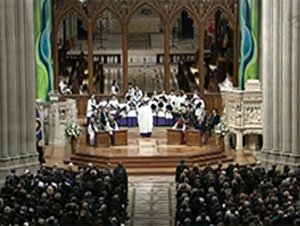 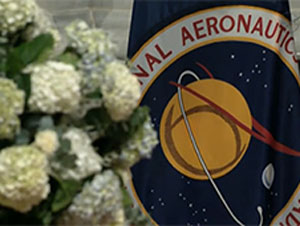 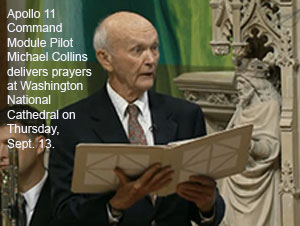 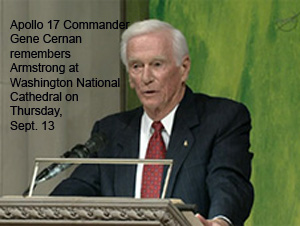 -
Update: 15.09.2012
-
Neil Armstrong Laid to Rest in Atlantic
First Man on the Moon Remembered for 'Courage, Grace and Humility'

Neil Armstrong, Apollo 11 commander and first man on the moon, was laid to rest in the Atlantic on Friday, Sept. 14, in a burial at sea ceremony aboard the USS Philippine Sea.
- 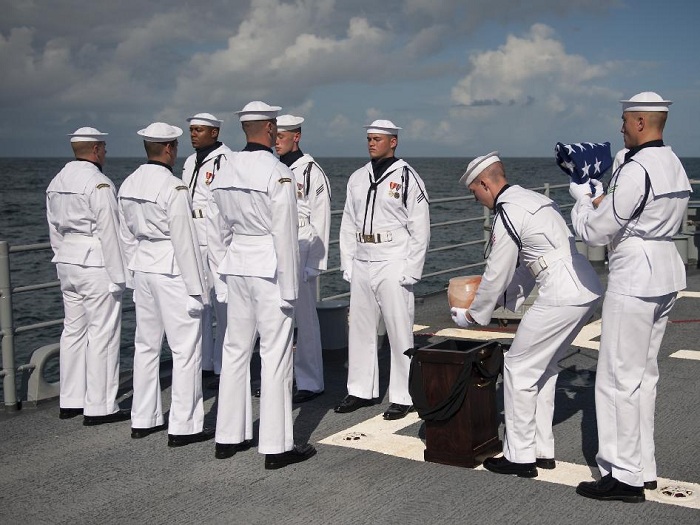