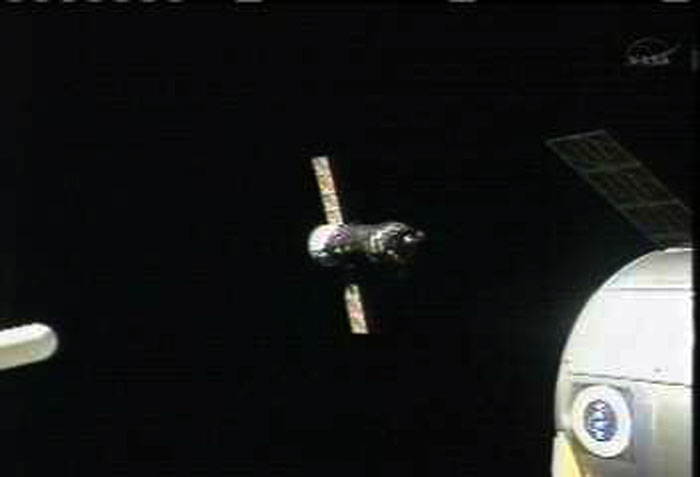 Russia's Progress 48 moves within 30 meters of the ISS prior to an accelerated docking. Image Credit: NASA TV
Russia’s Progress 48 mission one day sprint to the six person International Space Station has concluded with success.
The unpiloted resupply capsule and its nearly three ton payload carried out a successful automated docking with the ISS Wednesday at 9:18 p.m., EDT, or less than six hours after the Progress 48 lifted off from the Baikonur Cosmodrome in Kazakhstan: an ISS first.
The linkup, 250 miles over the Pacific Ocean west of South America, unfolded 7 minutes ahead of the forecast, or an elapsed time of 5 hours, 43 minutes.
The four orbit journey served as a test flight for a possible Soyuz crew transport mission to the ISS with three passengers. A crew follow on is likely at least a year away, Dina Contella, NASA’s current ISS lead flight director, said shortly before the lift off.
The Progress 48 spacecraft   rose from Central Asia at 3:35 p.m., EDT, or on Aug. 2 at 1:35 a.m., local time.
The spacecraft successfully carried out a quartet of precise rendezvous maneuvers over the first two hours, 40 minutes of flight to set up the much abbreviated rendezvous. The normal Progress cargo and Soyuz crew mission timelines unfold over 34 orbits or just over two days.
The “sprint” is intended to improve crew comfort. The longer Soyuz journey requires a steady roll of the spacecraft to manage external thermal extremes from the cold and heat of space on the capsule exterior.
In the event of an emergency shortfall of supplies on the ISS, the Progress 48 flight also demonstrates a “stat” equipment response.
The Progress 48 cargo includes fuel, water, compressed breathing air, spare parts and research gear for the station’s six-person crew.
Then new Russian freighter is expected to remain at the station until late December.
At least one more express Progress test flight, perhaps later this year, is anticipated before a Soyuz mission test of the accelerated timeline is attempted, NASA spokesman Rob Navias said from NASA’s Mission Control late Wednesday.
Quelle: NASA
« Zum vorherigen Eintrag Zum nächsten Eintrag »
4387 Views
Created with page4