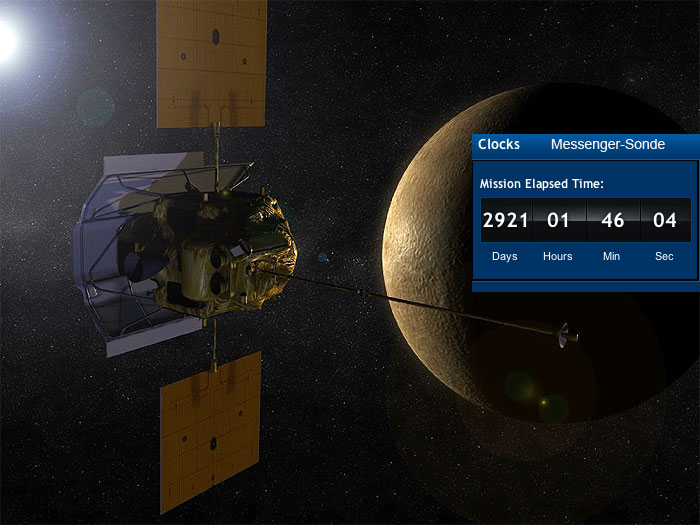 Since moving into orbit about Mercury a little over one year ago, NASA's MESSENGER spacecraft has captured nearly 100,000 images and returned data that have revealed new information about the planet, including its topography, the structure of its core, and areas of permanent shadow at the poles that host the mysterious polar deposits.  The latest findings are reported in two papers published online in Science Express, and in 57 papers presented this week at the 43rd Lunar and Planetary Science Conference in The Woodlands, Texas.
A Surprising Core
MESSENGER's radio tracking has allowed the scientific team to develop the first precise model of Mercury's gravity field which, when combined with topographic data and the planet's spin state, sheds light on the planet's internal structure, the thickness of its crust, the size and state of its core, and its tectonic and thermal history.
Mercury's core occupies a large fraction of the planet, about 85% of the planetary radius, even larger than previous estimates. Because of the planet's small size, at one time many scientists thought the interior should have cooled to the point that the core would be solid. However, subtle dynamical motions measured from Earth-based radar, combined with MESSENGER's newly measured parameters of the gravity field and the characteristics of Mercury's internal magnetic field that signify an active core dynamo, indicate that the planet's core is at least partially liquid.
Mercury's core is different from any other planetary core in the Solar System. Earth has a metallic, liquid outer core sitting above a solid inner core. Mercury appears to have a solid silicate crust and mantle overlying a solid, iron sulfide outer core layer, a deeper liquid core layer, and possibly a solid inner core. These results have implications for how Mercury's magnetic field is generated and for understanding how the planet evolved thermally.
Landscape Curiosities
A planet's topography can reveal fundamental information about its internal structure and its geological and thermal evolution. Ranging observations from MESSENGER's Mercury Laser Altimeter (MLA) have provided the first-ever precise topographic model of the planet's northern hemisphere and characterized slopes and surface roughness over a range of spatial scales. From MESSENGER's eccentric, near-polar orbit, the MLA illuminates surface areas as wide as 15 to 100 meters (50 -325 feet), spaced about 400 meters apart (1,300 feet).
The spread in elevations is considerably smaller than those of Mars or the Moon. The most prominent feature is an extensive area of lowlands at high northern latitudes that hosts the volcanic northern plains. Within this lowland region is a broad topographic rise that formed after the volcanic plains were emplaced.
At mid-latitudes, the interior plains of the Caloris impact basin — 1,550 kilometers (960 miles) in diameter — have been modified so that part of the basin floor now stands higher than the rim. The elevated portion appears to be part of a quasi-linear rise that extends for approximately half the planetary circumference at mid-latitudes. These features imply that large-scale changes to Mercury's topography occurred after the era of impact basin formation and large-scale emplacement of volcanic plains had ended.
Polar Shadows
A chief goal of MESSENGER's primary mission was to understand the nature of the radar-bright deposits at the poles of Mercury. The leading proposal since the deposits were discovered has been that radar-bright material consists dominantly of frozen water ice. Scientists have never had the imagery available before to see the surface where these radar-bright features are located. But images from MESSENGER's Mercury Dual Imaging System show that all the radar-bright features near Mercury's south pole are located in areas of permanent shadow, and near Mercury's north pole such deposits are also seen only in shadowed regions.
These results are consistent with the water-ice hypothesis but not definitive proof. But the MDIS images, combined with ongoing analysis of data from MESSENGER's Neutron Spectrometer and the MLA, will provide a more complete picture of the nature of the deposits.
- 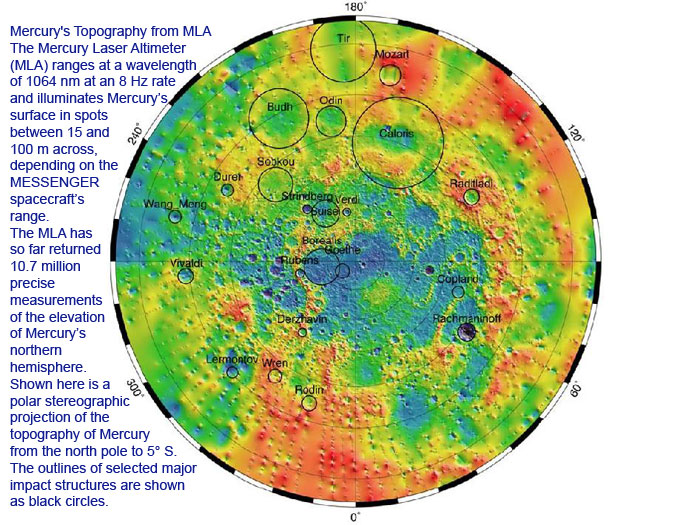 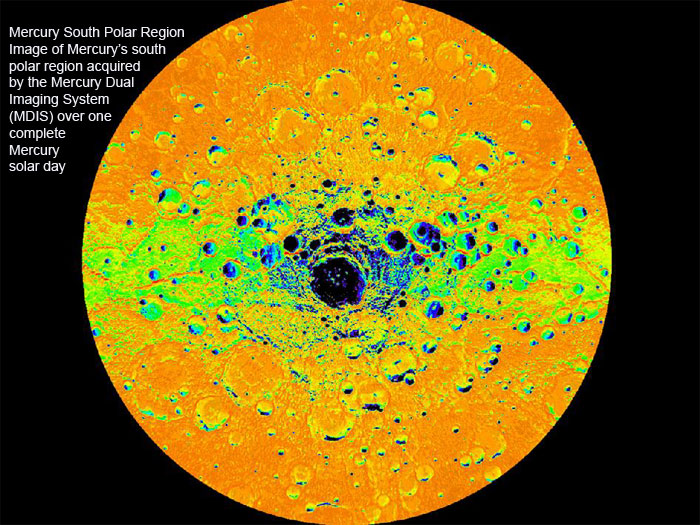 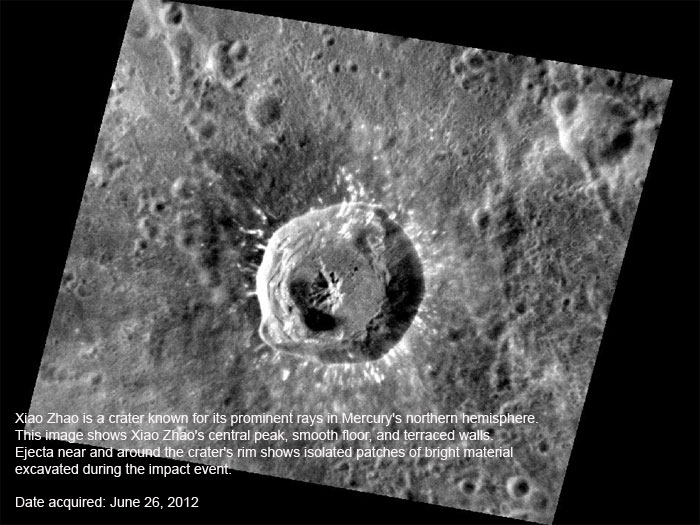