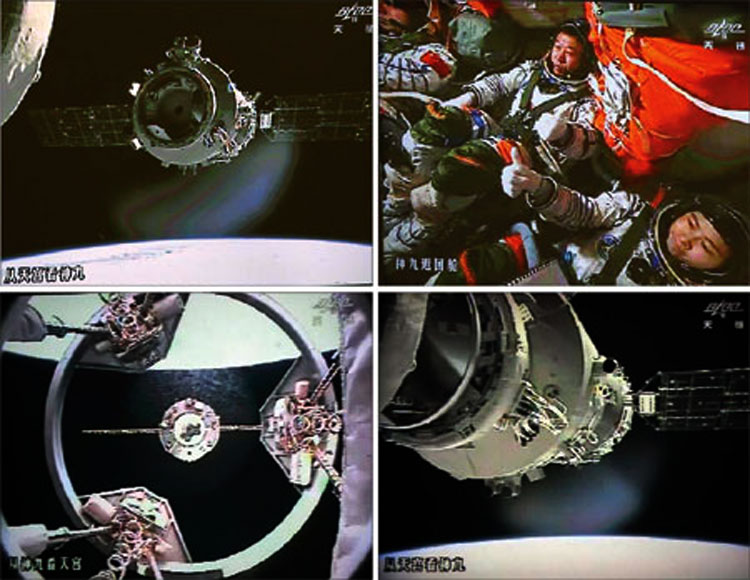 Astronauts celebrate the successful manual docking of the Shenzhou IX spacecraft with the Tiangong-1 module in video clips released on Sunday. The clips, from the Jiuquan Satellite Launch Center and Beijing Aerospace Control Center, also highlight the precision approach required for the procedure to be successful. [Photo/China Daily]
Triumph of technology after manual docking and sea dive
From sea to space, from orbit to ocean, Chinese skill and technology proved up to the challenge.
Good luck! That was the message from the deep sea to space.
Congratulations! That was the reply from space to sea.
Astronauts and oceanauts exchanged those messages on Sunday amid triumphs of technology.
China's manned space program saw the Shenzhou IX spacecraft conduct a "perfect" manual docking with the Tiangong-1 space lab module.
The manual docking means "China now has a full command of space rendezvous and docking technology", Wu Ping, spokeswoman for the manned space program, said at a news conference on Sunday.
Being able to conduct automatic and manual dockings is a prerequisite for assembling a space station, which China has scheduled for 2020.
Though China has conducted three automatic dockings and one manual docking, Wu said more dockings are planned to test the technology.
A Shenzhou X spacecraft will be launched next year, she said. It will take expenditure on the manned program to 39 billion yuan ($6.13 billion) starting from 1992 when the program commenced.
Sunday's docking was "precise and perfect", she said.
The three astronauts, including China's first female astronaut Liu Yang, woke up shortly before 5 am on Sunday, two hours before their usual time, according to Chen Shanguang, director of the Astronaut Center of China.
They got up early because they had, among other things, to move equipment from Tiangong-1 to Shenzhou IX, examine module doors, and put on spacesuits, Chen said at the Beijing Aerospace Control Center.
At about 11 am, Shenzhou IX undocked from Tiangong-1 automatically and took up a position 400 meters from Tiangong-1.
Shortly before 1 pm, Liu Wang operated the parallel moving and altitude adjustment lever to control the approach of Shenzhou IX toward Tiangong-1. The two other astronauts assisted by monitoring instruments.
The spacecraft locked with each other at 12:55 pm.
Liu Wang became China's first astronaut to actually pilot a spacecraft.
Chen gave top marks to Liu Wang, stressing that the job was completed three minutes quicker than planned.
"It showed our astronauts are well trained and skillful," spokeswoman Wu said.
According to Wu, the astronauts will spend another three to four days in Tiangong-1, before they conduct a manual undocking and return to Earth.
According to earlier reports, they are expected to return to Earth on Friday, with the Shenzhou IX's re-entry module landing in the central region of the Inner Mongolia autonomous region.
The manned Shenzhou IX spacecraft was launched on June 16 from the Jiuquan Satellite Launch Center in Northwest China's Gansu province.
The vessel conducted an automatic docking with Tiangong-1 on June 18. The three astronauts then entered the module to conduct experiments related to long-endurance missions.
In the past few days, astronauts have received e-mails from the ground control center and set up video chats with families and colleagues.
According to footage provided by the Beijing Aerospace Control Center, the astronauts talked to their families on Thursday. Liu Wang played a harmonica to celebrate his wife's birthday on Thursday, though it is not revealed which tune he played.
The footage also showed female astronaut Liu Yang practicing weightless forward rolls.
7,020 meters in sea
As if not to be outdone, China's oceanauts mastered their technological challenge by going deeper than 7,000 meters under the sea.
Jiaolong, the manned submersible named after a mythical sea dragon, reached 7,020 meters below sea level during its fourth dive into the Mariana Trench in the western Pacific Ocean.
The three oceanauts, Ye Cong, Liu Kaizhou and Yang Bo, sent greetings from the bottom of the sea to the astronauts before their manual docking.
Vice-Premier Li Keqiang congratulated the oceanauts, saying the successful dive to beyond 7,000 meters marks a technological breakthrough in deep-sea research and exploration.
Jiaolong previously reached depths of 6,671, 6,965 and 6,963 meters in dives from June 15 to 22, easily passing the record of 5,188 meters it set in July.
Jiaolong has enabled China to join the ranks of countries with deep-dive technology.
The United States, Japan, France and Russia currently lead the world in the development of deep-sea technology.
Submersibles from Russia and Japan have reached about 6,000 meters.
Jiaolong will attempt two more dives in the Mariana Trench, the deepest part of the ocean, and is expected to return to China in mid-July.
Xu Qinan, the submersible's chief designer, told China Daily that the successful dive to the depth of 7,020 meters in the Mariana Trench on Sunday can provide useful data and technical support for scientific research and peaceful exploration.
"Jiaolong is designed for a maximum depth of 7,000 meters," the chief designer said, but added everyone thought it can go that bit deeper.
Bathyscaphe Trieste, a submersible from the US, reached a record depth of about 11,000 meters in the Mariana Trench in 1960.
"If China has a need to reach that depth for scientific research, we (the designing team) will do our best to develop new submersibles capable of doing it." 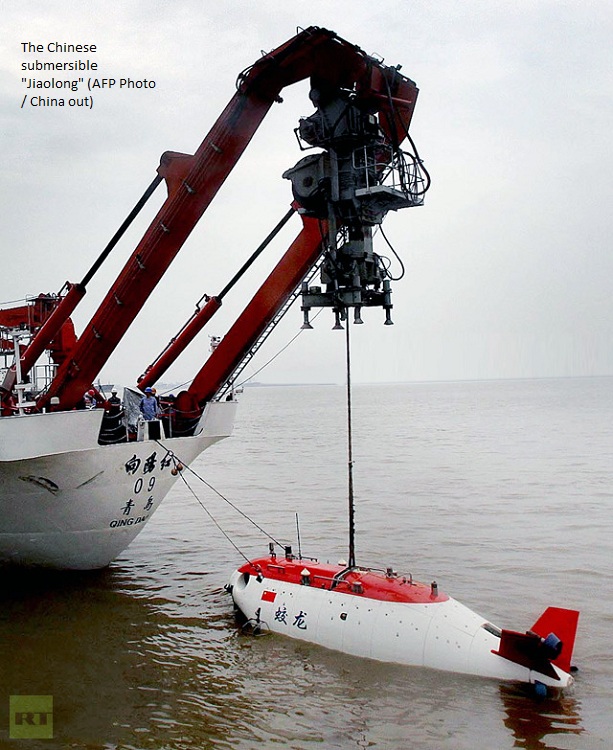