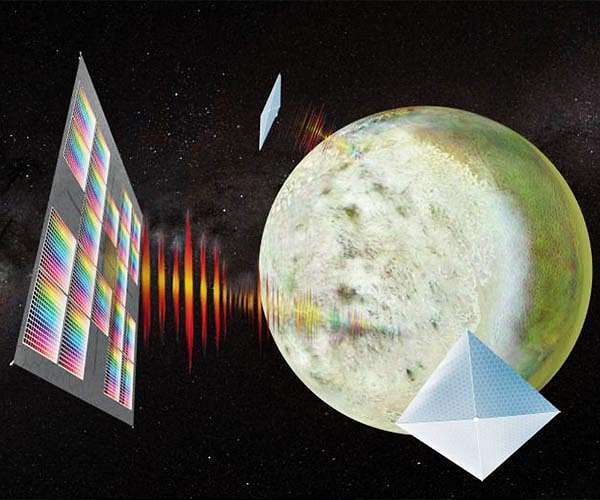 In this illustration, multiple solar sail ScienceCraft gather light spectra from Neptune's moon Triton. The banner image at the top of the page depicts a similar swarm around Neptune.

In NASA's hunt for water and resources beyond Earth, a new technology could coat the "skin" of a satellite, turning its entire surface into a sensor that tallies the chemicals present on distant planets.

Solving the mysteries of our home planet, solar system, and beyond is a key priority for NASA, and the new sensor could be a powerful tool in the investigation. Mahmooda Sultana, an instrument scientist at NASA's Goddard Space Flight Center in Greenbelt, Maryland, developed the Quantum Dot Spectrometer to help.

Quantum dots are a type of semiconducting nanocrystal that absorbs and re-emits different wavelengths of light depending on their size, shape and chemical composition. Sultana gets her dots, which vary from 2 to 10 nanometers or less than 50 atoms thick, from the lab of chemistry professor Moungi Bawendi, at the Cambridge-based Massachusetts Institute of Technology.

She then uses them to break down light from a planet or other target into portions of the spectrum, creating a sort of fingerprint which reveals what elements or compounds that light has touched.

"Basically, we are converting the entire optical problem into a math problem," Sultana said. "The dots can be identified in the lab to register light of a particular wavelength - a fraction of the chemical fingerprint. Detectors on the other side of the dots collect the fractions, then the data is handed over to computers on the ground to reassemble the complete fingerprint."

"The math is complex," she added, "but using machine learning, we are able to get amazing accuracy, even on more complex spectral curves."

A typical spectrometer can be a relatively bulky piece of equipment, taking up precious real estate aboard a satellite. What sets Sultana's Quantum Dot Spectrometer apart is a literally small miracle of modern chemistry.

Enabling new applications on small satellites as well as solar sails, Sultana's instrument has potential for studying Earth's surface composition, ocean color, vegetation, and atmospheric chemistry, as well as providing insight into auroral interactions. As an engineer interested in planetary science, Sultana said her quantum dot spectrometer could identify water and other chemicals in lunar soil and characterize surface and atmospheric elements of other planets.

ScienceCraft - a New Vision for Exploration
The versatility of the quantum dot technology could enable a low-cost mission to an outer solar system planet.

Her concept - ScienceCraft for Outer Planet Exploration, or SCOPE - capitalizes on the sensor's versatility and low mass. A solar sail, printed with separate layers for readout electronics, detector array, quantum dot spectrometer, and microlens array, would serve as a spacecraft, propulsion system, and science instrument in one.

She is working to develop this mission concept through a Phase I NASA Innovative Advanced Concepts (NIAC) program award granted this April. Her team has already automated the dot printing process. The sail concept is being developed by co-investigator Artur Davoyan, a professor at UCLA.

"This is a game-changing concept," she said. "We are essentially addressing three of the key barriers to outer solar system exploration: the high cost, long travel time, and a narrow window to launch a mission that can rendezvous with these distant planets."

Driven by the gentle pressure of sunlight across a large area, the sail would pick up speed by orbiting close to the Sun, propelling it into the outer solar system.

"There is currently a gap for exploring the Neptune-Triton system," he said. "Can we do some Neptune science on a fast-flyby, lower-cost mission? It's the sort of planetary system that SCOPE could find a niche in exploring."

In 1989, Voyager 2's close-up images of Triton first revealed its icy surface, marked by plumes that hinted at an active geology and a hidden ocean beneath the ice. Investigating how Triton has changed over time would help scientists better understand how solar system bodies evolve and function.

"As people around the world develop the capability to print electronics or produce different materials and structures, more instruments like the Quantum Dot Spectrometer can be printed directly with the solar sail to create additional ScienceCraft opportunities," Sultana said.