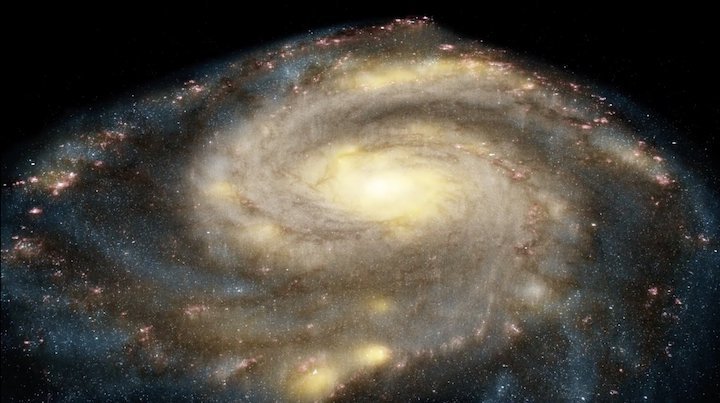 The Whirlpool galaxy, seen here in a still from a NASA video, stars in a stunning new visualization that combines observations from the Hubble and Spitzer space telescopes and Chandra X-ray Observatory.

Three powerful space observatories reveal the Whirlpool Galaxy as a wonder of star formation and star death in a new video from the Space Telescope Science Institute, which performs the science operations for the Hubble Space Telescope.

The 3-minute series of images opens with a stunning visual-wavelength view of the galaxy, a supernova (star explosion)-rich zone that lies about 30 million light-years from Earth in the direction of the northern constellation Canes Venatici. The Whirlpool Galaxy is officially known by astronomers as M51 or NGC 5194.

"The Whirlpool Galaxy is perhaps the most striking example of a spiral galaxy," Hubble officials say in the video. "Different wavelength observations reveal different structures in the galaxy. In three dimensions, the galaxy's spiral arms whirl through a pancake-shaped disk." [When Galaxies Collide: Amazing Hubble Telescope Photos]

In visible light, astronomers can spot some older and younger stars: The yellower and older stars are near the center of the galaxy, while younger and bluer stars tend to cluster in the galaxy's spiral arms. Infrared light shows the oldest and reddest stars, which populate the entire galaxy. Meanwhile, X-rays show the high-energy zones. This includes energetic emissions from binary star systems with black holes or neutron stars. (A neutron star is the densely packed star core left behind after the original star explodes in a supernova.)

Different wavelengths can also reveal the overall structure of the galaxy, the video explains. Embedded in the center of Whirlpool is a supermassive black hole, which emits powerful X-rays. Cool gas and dust in the arms shines in infrared temperatures, revealing the galactic structure. Meanwhile, hotter gas in stellar nurseries shows the presence of supernova explosions, which heats the gas to high temperatures.