The spacecraft that carried Tim Peake to and from the International Space Station last year has gone on display at London's Science Museum.

The museum says the Russian capsule is an important part of UK space history and hopes it will inspire the public.

The Soyuz TMA-19M has been refurbished, but is still slightly singed from re-entry into the Earth's atmosphere.

Major Peake may also comment on the expectation that he will be given another mission to the space station.

The UK committed in December to continue to participate in the European Space Agency's (Esa) space station programme.

And last week, Esa's director-general Jan Woerner set out his plans for human space flight at a news conference in Paris.

He announced that another mission was "foreseen" for Major Peake in the next wave of European manned missions. A second flight for the British astronaut would likely happen in the period 2019-2024.

Just over a year ago, Tim Peake set off for his mission to the International Space Station. Within a few weeks he became the first British astronaut to walk in space.

Executives at the Science Museum hope the spacecraft's connection to the British astronaut will prove a major draw.

It was from within this 2m-high, bell-shaped vehicle that Major Peake witnessed the wonders of space.

The right-hand seat was Tim's and from it he looked out of the window and saw the curvature of the Earth for the first time. It was also from this window that he witnessed what it was like to re-enter the atmosphere at the end of his mission.

The spacecraft provides the UK with a link to its own astronauts and a reminder of its role in space exploration.

The Science Museum says that it wants the display to inspire those that see it, especially children - many of whom might wish to follow in Major Peake's footsteps.

Tim Peake will return to the International Space Station

And soon we might even have a spaceport here in the UK. Be inspired, kiddies! 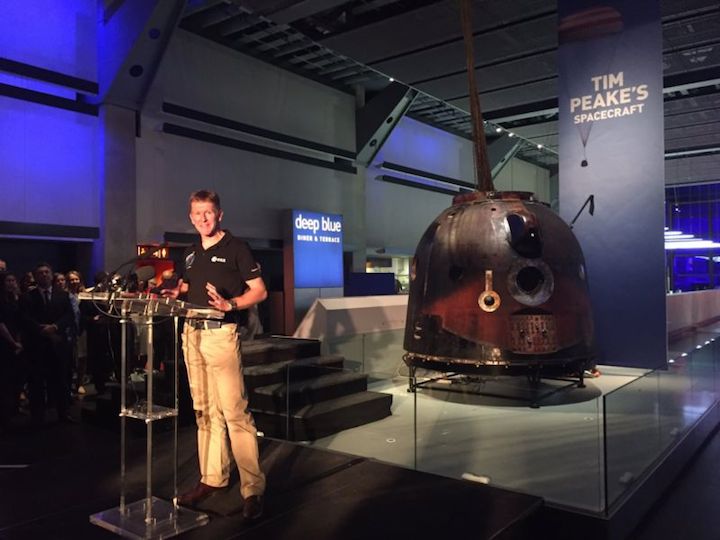 Tim Peake will return to the International Space Station, the UK government confirmed on Thursday. The schedule and purpose of his second mission will be announced by the European Space Agency (ESA) in due course.

The announcement was made at the Science Museum on Thursday morning, with Tim Peake standing in front of the Soyuz capsule that ferried him to the ISS in December 2015 and back to Earth in June 2016. The Soyuz capsule, official designation TMA-19M, was permanently acquired by the Science Museum last year and will be on display for the foreseeable future. Apparently it's the first flown, human-rated spacecraft to be acquired by the UK.

Peake's return to the ISS is part of the UK's ongoing efforts to egg on the country's space industry, and to encourage kids to follow their STEM dreams. The UK will contribute €1.4 billion over the next four years to the ESA, and this morning the UK government announced that the UK Space Agency now has an additional £152 million to bolster the country's various satellite companies, and their supply chain of specialist manufacturers that make parts for the satellites.

When he visited the ISS last year, Peake became one of the few British people to ascend above the Earth's atmosphere: he was the first British ESA astronaut, and only the second astronaut to wear the UK flag patch after Helen Sharman, who visited Mir way back in 1991. While he was up there, Peake consumed some special meals prepared for him by Heston Blumenthal, including a bacon sandwich and a cup of tea (if you haven't seen the accompanying Dinner in Space TV series on Channel 4, you probably should).

In other news, the UK is still somewhat serious about building a spaceport, though it seems efforts have slowed down somewhat over the past year. The original plan was to hold a competition between a number of potential locations, and then build a spaceport at the winning site by 2018. In May 2016 the competition ended without a winner, with the UK government instead moving to a "licensing" model, where a commercial spaceport could be built anywhere, by anyone, as long as it fulfilled the necessary regulatory criteria.

As we understand it, Prestwick Airport outside Glasgow is currently the most likely site to become an operational spaceport. These are private, commercial deals, though, rather than government-led, so it's hard to predict with any certainty what's going on at other potential sites.