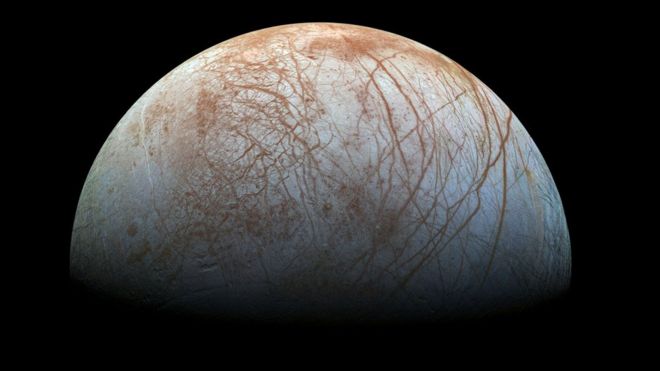 Further evidence has been obtained to show that Jupiter's icy moon Europa throws jets of water out into space.

Scientists first reported the behaviour in 2013 using the Hubble telescope, but have now made a follow-up sighting.

It is significant because Europa, with its huge subsurface ocean of liquid water, is one of the most likely places to find microbial life beyond Earth.

Flying through the jets with an instrumented spacecraft would be an effective way to test the possibility.

One could even attempt to capture a sample of ejected material and bring it back to Earth for more detailed biological analysis.

The alternative - of trying to land on the moon and drill through perhaps tens of kilometres of ice to examine the ocean's water - would be immensely challenging.

Hubble made its latest identification by studying Europa as it passed in front of Jupiter.

The telescope looked in ultraviolet wavelengths to see if the giant planet's light was in any way being absorbed by material emanating from the moon's surface.

Ten times Hubble looked and on three of those occasions it spied what appeared to be "dark fingers" extending from the edge of Europa.

William Sparks, the lead astronomer on the study, said he could think of no natural phenomenon other than water plumes that might produce such protuberances.

"We're not aware of any instrumental artefacts that could cause these features; they are statistically significant. But we remain cautious because we are working at difficult wavelengths for Hubble," he told reporters.

"We do not claim to have proven the existence of plumes, but rather to have contributed evidence that such activity may be present."

Nonetheless, the location for the putative jets looks very similar to the region where Hubble earlier this decade detected an excess of oxygen and hydrogen - the component parts of water.

"The [earlier work] used spectroscopy, so they really could discern evidence of dissociated water molecules," she commented.

The suggestion is that the jets reach several hundred kilometres in height before then falling back on to Europa. The calculation based on the 2013-reported work estimated a volume of water equivalent to an Olympic swimming pool could be being spewed into space about every eight minutes.

What is clear though is that any activity is sporadic, and scientists will need to understand why that should be so.

Water jets have already been seen up close at Enceladus, an icy moon of Saturn. These emanate from a series of fissures at its south pole.

The Cassini spacecraft, in orbit currently at Saturn, has even dived through the emissions to "taste" some of their chemistry. But the probe's instrumentation is not designed to detect the presence or activity of microbes. That would require a mission dedicated to the task.

The US space agency (Nasa) has just sent a satellite to Jupiter called Juno, but again this has no life-detection equipment onboard and, in any case, is not going anywhere near Europa in the course of its work.

Both Nasa and the European space agency do however have future missions in the planning stage that will visit Europa to make repeated flybys, and the determination that the moon has water jets will surely factor into the organisations' thinking.

Curt Niebur, who works on the American concept, said the spacecraft would have instruments that could "aggressively investigate" any plumes, but he also stressed that obtaining convincing proof that microbes lived at Europa was far from easy.

"The Europa flyby mission which will launch in the 2020s is not a life-finding mission," he explained. "That mission is focused on assessing the habitability of Europa.

"And we do it in this way for a very simple reason: we know how to measure habitability; we have a lot of experience at doing that; we have a lot of instruments that are very robust and good at doing that. When it comes to finding life, we don't have as much experience. And we actually have an ongoing and vigorous debate in the scientific community as to the best way of going about detecting life on a mission such as this."

What was not in doubt, said Paul Hertz, the director of the astrophysics at Nasa, was Europa's profile as a key target in the search for extra-terrestrial life: "On Earth, life is found wherever there is energy, water and nutrients. So we have a special interest in any place that might posses those characteristics. And Europa might be such a place."

"Europa's ocean is considered to be one of the most promising places that could potentially harbor life in the solar system," NASA scientist Geoff Yoder said in a statement. "These plumes, if they do indeed exist, may provide another way to sample Europa's subsurface."

They were able to spot the silhouette of the plumes when Europa passed in front of Jupiter:

Back in 2012, scientists spotted water vapor over Europa in a Hubble image. They thought the water vapor may have come from a plume of water erupting from the moon's south pole, but they weren't sure. This new research is even clearer evidence that Europa likely has water plumes.

During a press conference on Monday, the researchers said they weren't aware of any other natural causes that could explain the projections they spotted in the Hubble images. The team plans to use the James Webb Space Telescope that will launch in 2018 to confirm the plumes.

Does this mean Europa could support life?

We already knew that below its icy crust, Europa has a subsurface ocean that covers the entire planet. Evidence has been piling up suggesting its ocean is similar to the oceans on Earth. We know our oceans are teeming with life, so that means Europa's ocean might be too.

It's difficult to study an ocean buried under a layer of ice.

If Europa has water plumes that break through the ice, it's possible a spacecraft could fly through one of these plumes and sample the water — much like the Cassini spacecraft that has sampled water plumes coming from Saturn's moon Enceladus. The samples could reveal what kind of chemicals are present in Europa's ocean, and give us an idea of whether or not it could support life.