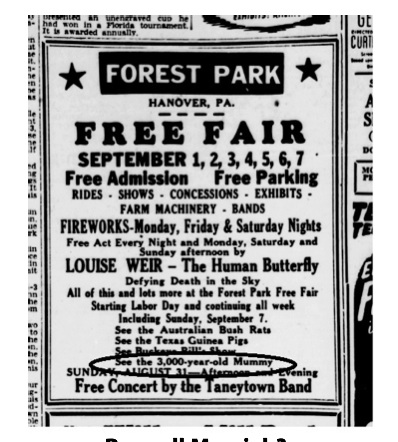 My experience in dealing with Kodachrome slides from the era was that the edge coding did not appear on each individual slide. In- stead, like the words “Eastman”, “Safety”, or “Kodak”, it was spread along the roll at regular intervals. The 16% success rate I obtained with the six 1940s era slides is consistent with the other slides I had examined from the 1950s (3 out of 20 or 15%). This indicates that the odds are low for dismounting one slide and seeing an edge code. This appears to be the case in slide number “9”. From what we can see in the film, the edge coding is not visible when, assuming there was an edge code, it should have been.
Even if the edge coding is present, it only indicates the year the film was manufactured. The slide mounts can help us determine the range of years when the slides were mounted but that is as far as we can get in dating the exact time of film exposure. If the film was determined to be manufactured in 1947, then there is a window of 1947-1949 based on the slide mount. It could have been exposed in January 1947 or December 1949. Without any specific information on the slide itself (i.e. The subject on the film holding some dated material), one can not draw any other conclusion.
---
The debut of the Roswell slides
Within the next few days, history is going to be made. Either the entire world will learn that alien beings have visited the earth in 1947 or the world will see a bunch of desperate individuals trying to make money/fame off a slide showing something mundane. We don’t know until we see the slides. That being said, I wanted to address what we do know about the slides and their background.
Whose slides are they anyway?
We are told these slides were all photographed by Bernerd and Hilda Ray. However, there are clues that this may not be exactly true. Photographs appear to come from across the United States and Europe. Did the Rays travel all over the United States for several years or are they a collection of slides taken by multiple individuals showcasing the combined group’s travels? We do know that some of the slides have Hilda’s name on them but do they all have the stamp? In the twenty plus slides revealed to date, only two or three appear to include the Rays. It is hard to establish that the Rays were actually present when the photographs were tak- en. IsitpossiblethatsomeoftheseslideswerefromfriendsorrelativesthatweregiventotheRays?Thismightexplainthemultiple images that came from Kansas, in 1947, when the Rays were supposedly in Midland, Texas or Roswell, New Mexico.
This lack of provenance is something noted by many people, including Kevin Randle. It raises many questions that demonstrate that the actual photographers may or may not have been the Rays. Despite this problem, we are told by the promoters that the Rays took these photographs of an alien that had perished when its spaceship crashed at Roswell.
The Roswell slides?
Since the very beginning of this entire saga, the slides have been linked to Roswell because of the people involved with the story.
1
Adam Dew has made the claim that he has “never” called them the Roswell slides. Despite his statement that he did not call
them “the Roswell slides”, he went to people like Don Schmitt and Tom Carey, who specialize in Roswell, instead of going to people, with the expertise to determine what the identity of the body might be. This indicates that he had decided the body was alien be- fore he took his next step of promoting the slides. He seems to have now embraced that title because, if one passes one’s mouse over the “Kodachrome” link on his web site, it states that this is a “Documentary about the Roswell slides 1947”! 2 Dew, like many UFO
.

Bragalia’s description of Ray seems rather exaggerated. Ray was the president of the West Texas Geological Society in 1946.14 In 1947, the president was William J. Hilseweck.15 If Ray was the President of the Texas chapter of American Institute of Petroleum Geologists in 1947 (I could not find evidence of this), then his time may have been focused on performing the duties of that position and he would have spent less time in the field. That means he would have been less likely to be in Roswell in July of 1947 or later.
Bragalia’s claim about Ray writing papers appears to be misleading. Not mentioned by Bragalia is that, prior to 1947, he only wrote two papers in the American Association of Petroleum Geologists (AAPG) bulletin and they covered the same subject. The 1942 pa- per was titled, “West Texas and Southeastern New Mexico development in 1941”. 16 It was coauthored by five writers and was only two pages long. The 1943 paper had essentially the same title, “West Texas and Southeastern New Mexico development in 1942”. It was a much longer paper (23 pages) and there was only one other author.17 By 1944, other authors began to write this annual report.18 I did searches in the bibliographies for North American Geology19 between 1940 and 1947 and could not find any papers other than those I just mentioned. As far as publishing papers/articles, Ray was a “ghost” long before 1947.
Despite his minimal effort in writing papers for the AAPG bulletin, Ray was active in the fields of western Texas doing his job in the oil industry. There are several references20 to Ray involved in the drilling and production from oil wells in the 1950s.21
. 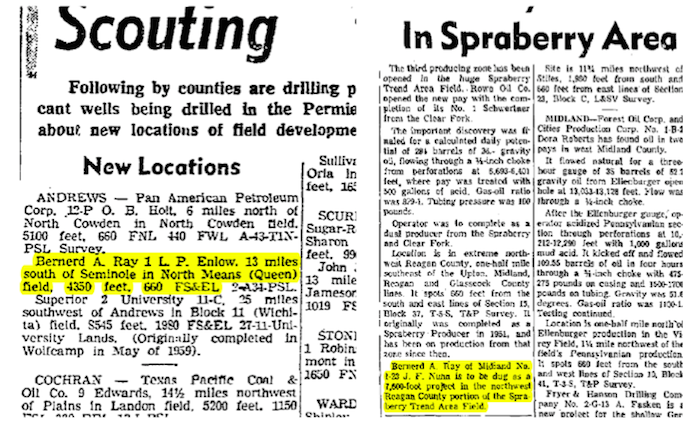 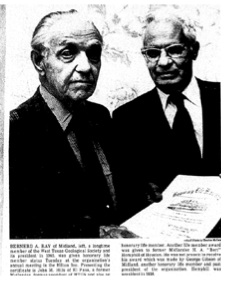 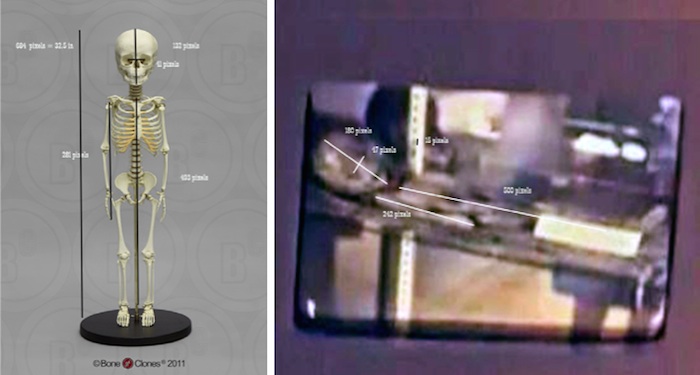 3. We don’t know if the eyes are even visible because of the supposed blurriness of the photographs. The orbit is usually about 4X the size of a human eye. If they are just eye sockets that appear like black eyes in the image, they are going to be larger than a human’s eyes. Bragalia also stated that the eyes were too far apart. I measured the ratio of the height of the skull to the middle of the eye as being under 4:1. The skull appears to be tilted towards the camera giving a higher ratio. Images of skulls I measured had a ratio of about 3.5:1 depending on the skull. This image of an archaic child’s skeleton35 can be used for comparison. Using the image taken from the Dew film is probably going to introduce some errors due to its size, distortions, and foreshortening of the body. While not the same, many of the measurements are similar indicating that the possibility exists that it is a human child.
4. The face and skull of the body may be distorted by the glass case to make it appear odd. Mummies can have distorted skulls and faces simply due to the ravages of time. Additionally, the skulls of some civilizations purposefully distorted the skull at a young age. Anthony Bragalia’s personal observations are biased towards the alien explanation. Like the supporters of the Patterson-Gimlin film, he sees bigfoot instead of considering the possibility that it is a man in an ape suit.
5. Bragalia’ s statement that the arms are too long is not correct based on my measurements. The ratio of the arm to the apparent length of the body, from the shoulders to the feet, appears to be about 0.5. This is not outside the normal for a human skeleton.
6. The glass case does not appear as unusual as Bragalia claims. His description of the blanket is very interesting. He states it was “hastily-cut”.36 There is no logical explanation for why the blanket would be cut for this display. If it were too big, it would be simply folded to fit the body. A more likely explanation is that the cloth beneath the body is very old and the ravages of time had resulted in the rough edges visible in the photograph. This would be consistent with a burial shroud for a mummy.
7. Taking photographs in doors is never easy and the images were probably poorly taken because of the shooting conditions. Using the photographs that were staged outside is not a proper comparison. However, even those photographs demonstrated similar problems. For instance, the Arc de Triomphe image from Paris shows poor framing and is tilted.
8. There is no evidence the slides were actually “hidden” on purpose or that they were separately packaged. This is the interpre- tation of what one person said and was retold by Adam Dew. Was it this way or was it a story told to make the slides appear more credible? Based on what we know, the four hundred slides were nothing more than a disorganized collection placed in a box. Examining the images that have been displayed, it is apparent they were assembled from other sub collections. These slides may have been in an envelope that was found and simply tossed into the box of slides. It is important to note that these slides were not labeled in any way indicating they were anything extraordinary even though Hilda Blair Ray made the effort to label some of the slides with her name!
9. There is no evidence presented to date that Ray ever was physically in the vicinity of Roswell at any point in his career. To say he was there in 1947 is just wild speculation. Most of his work was in southwest Texas. The same can be said for his claim about Ray using Kodachrome in his field work. Bragalia claims that he spoke to somebody, who told him that Kodachrome was used in such work but anecdotes are not evidence. Confirmed sources demonstrating that Bernerd Ray specifically used Kodachrome film in his oil research is what needs to be presented.
10. We do not know if Benavides is telling us the truth or making these stories up. He was shown the images with the precondition- ing that these slides could show the aliens he claimed he saw. Would he have said the same if they showed him an image from the Alien Autopsy film or some other alien body hoax?
Without the actual slides, we can not properly evaluate the evidence and must take Bragalia’s word that he is being accurate in re- porting what is in the slide images. However, there is enough information obtained from the Dew video image that demonstrates his conclusions are biased to support his own personal beliefs and are not objective observations. Undaunted by Bragalia’s verbal barrage, some of the members of the RSRG presented one mummy they felt MIGHT be the source of the image in the slides.
. 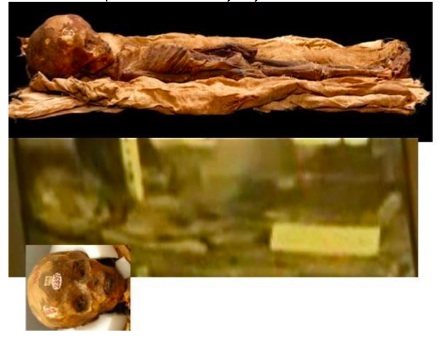