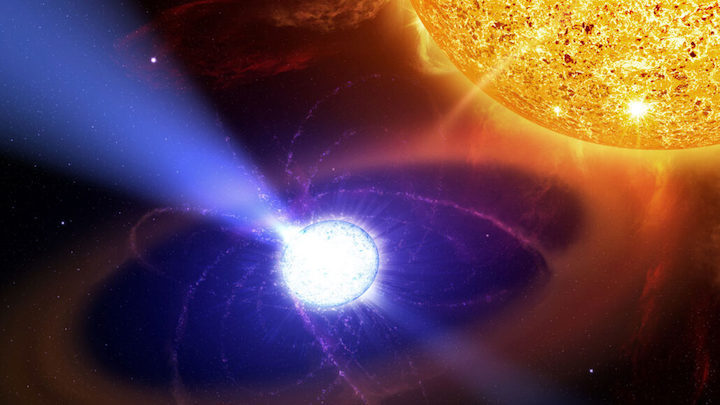 A white dwarf star (left) can spin fast after a red dwarf star (right) dumps gas onto it, as shown in this artwork of the binary star system AE Aquarii. A similar system was just discovered to contain the fastest spinner on record.

The sun turns once a month and the Earth once a day, but a white dwarf star 2,000 light-years away spins every 25 seconds, beating the old champ by five seconds. That makes it the fastest-spinning star of any sort ever seen — unless you consider such exotic objects as neutron stars and black holes, some of which spin even faster, to be stars (SN: 3/13/07).

About as small as Earth but roughly as massive as the sun, a white dwarf is extremely dense. The star’s surface gravity is so great that if you dropped a pebble from a height of a few feet, it would smash into the surface at thousands of miles per hour. The typical white dwarf takes hours or days to spin.

The fast-spinning white dwarf, named LAMOST J0240+1952 and located in the constellation Aries, got in a whirl because of its ongoing affair with a red dwarf star that revolves around it. Just as falling water makes a waterwheel turn, so gas falling from the red companion star made the white dwarf twirl.

The discovery occurred the night of August 7, when astronomer Ingrid Pelisoli of the University of Warwick in Coventry, England, and her colleagues detected a periodic blip of light from the dim duo. The blip repeated every 24.93 seconds, revealing the white dwarf star’s record-breaking rotation period, the researchers report August 26 at arXiv.org.

The star’s only known rival is an even faster-spinning object in orbit with the blue star HD 49798. But that rapid rotator’s nature is unclear, with some recent studies saying it is likely a neutron star, not a white dwarf.