The recovery ships "Bob" and "Doug" are named after the first crew SpaceX launched for NASA. 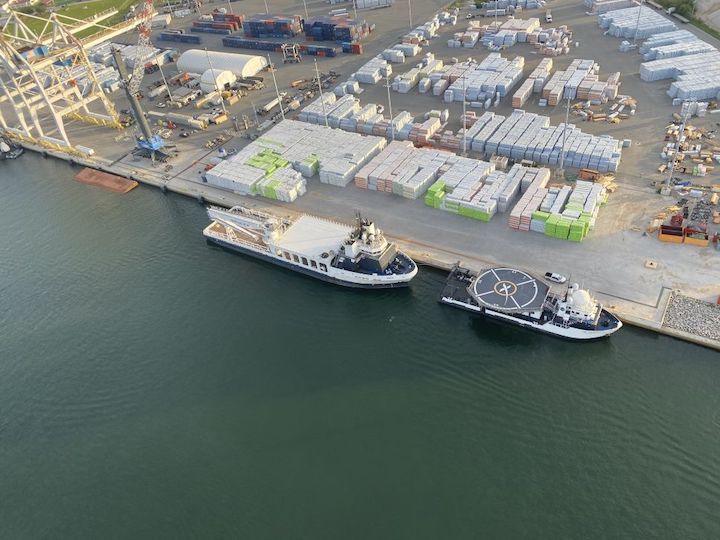 SpaceX has named its two new recovery ships "Bob" and "Doug" after NASA astronauts Bob Behnken and Doug Hurley, the first astronauts the company launched for NASA on the Demo-2 mission to the International Space Station in 2020. (Image credit: Amy Thompson/Space.com)

CAPE CANAVERAL, Fla. — The two newest members of SpaceX's recovery fleet sailed into Port Canaveral this month. At least one of the dynamic duo, named "Bob" and "Doug," will help in the recovery efforts of the company's newest crew mission: Inspiration 4.

The ships are named after Bob Behnken and Doug Hurley, two NASA astronauts who were the first to fly inside a crew Dragon spacecraft. Their mission, known as Demo-2, was the final test flight of SpaceX's commercial crew program, which blasted off from Kennedy Space Center on May 30, 2020. It's success cleared the way for routine astronaut flights to and from the space station, and ultimately Inspiration 4.

SpaceX has a fleet of recovery ships, each with its own purpose from catching first stage boosters, to retrieving falling fairings. "Bob" and "Doug" will be a bit of both. The two multi-purpose recovery ships are designed to handle a variety of tasks, and will even take part in the historic Inspiration 4 mission, which is set to blast off on Sept. 15.

As part of the Inspiration 4 mission, a crew of four private citizens will strap into a Crew Dragon spacecraft and blast off on a three-day journey around the Earth. Jared Issacman, a billionaire and founder of Shift4 Payments will be joined by Haley Arceneaux, Sian Proctor, and Chris Sembroski as part of an effort to raise millions for St. Jude's Children Research Hospital.

"Bob" and "Doug" are former platform supply ships, which are designed to serve offshore platforms. SpaceX made modifications to the ships, including outfitting them with a large crane that can pull fairing pieces out of the water. (The company retired its two iconic fairing catchers, GO Ms. Tree and GO Ms. Chief earlier this year.)

But that's not all, the new ships will also be able to help tow the drone ships out to sea. "A Shortfall of Gravitas" and "Just Read the Instructions" require tugs to pull them through Port Canaveral and out to sea. Thanks to some upgrades, "A Shortfall of Gravitas" is capable of then autonomously driving itself out to sea, while "Just Read the Instructions" will need a tug the whole way. This is where "Bob" and "Doug" come in.

The new ships will enable SpaceX to streamline its recovery efforts, and in the case of Inspiration 4, have all hands on deck. Meaning, the company's dedicated Dragon-recovery ships will be stationed around Florida for launch and splashdown, allowing "Doug" to help with the drone ship and booster recovery efforts.

It's unclear whether or not "Bob" will play a role in the Inspiration 4 mission, but "Doug" was spotted doing sea trials this week prior to departing the Port for the recovery zone.