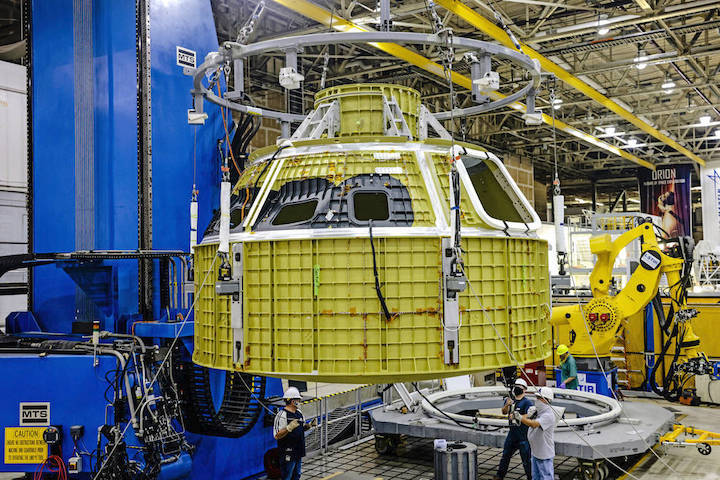 Over the next decade, NASA’s Orion spacecraft will carry astronauts during Artemis missions to the Moon to help prepare for human missions to Mars. Work on the spacecraft for Artemis I is nearly complete, Artemis II is well underway, and NASA is making progress on vehicles for the missions beyond.

The agency recently completed welding on the Artemis III Orion pressure vessel, the underlying frame of the air-tight capsule for astronauts called the crew module. This structure is the first major piece of hardware in Orion’s production phase with lead contractor Lockheed Martin.

“NASA is shifting its focus from the development phase to the production phase for the Orion spacecraft to enable a long-term presence on and around the Moon,” said Cathy Koerner, Orion program manager.

The development phase — called design, development, test, and evaluation (DDT&E) — is when Orion’s requirements are defined, the design undergoes review and refinement, and the spacecraft and its systems go through rigorous testing.

“All of the intensive testing we’ve done has proven out the design of Orion’s structure,” said Stu McClung, chief of staff for Orion program, planning, and control. “A structure that’s well understood and defined gives us high confidence to move forward into the production phase.”

Each component of Orion has undergone thorough testing since the beginning of DDT&E to prepare Orion for this transition. This includes Exploration Flight Test-1, Orion’s first flight test in 2014 that demonstrated its space-worthiness in a high-Earth orbit, and tested the spacecraft’s heat shield during entry into Earth’s atmosphere and the capsule’s recovery systems.

NASA has also completed successful testing of Orion’s parachute system, as well as the launch abort system with two flight tests known as Pad Abort-1 and Ascent Abort-2. Simulated in-space environments testing also verified that Orion’s systems will perform as expected during Artemis missions, among countless other tests of the spacecraft.

The DDT&E phase will officially conclude with the Artemis II mission, the first test flight with crew. Although no structural changes on the vehicle are expected to come from Artemis I and II, the mission outcomes may drive minor changes or upgrades into subsequent builds. 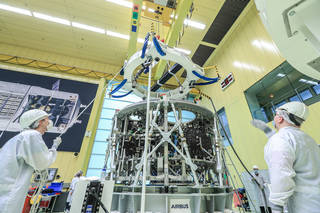 ESA (European Space Agency) has signed a follow-on contract with Airbus for the construction of three additional Orion European Service Modules beyond Artemis III. The Artemis III service module is currently being integrated in Bremen, Germany, with components and hardware built and supplied by companies from 10 countries in Europe as well as the United States.
Credits: AirbusSpace

“As we fly, we will learn and adapt the spacecraft to the missions as needed,” said Assistant Orion Program Manager Paul Marshall. This could include modifying crew systems or crew interfaces to help astronauts perform future missions as smoothly as possible.

In the production phase, engineers will apply refinements to Orion’s design to ensure that manufacturing and assembly are as efficient as possible. One of many improvements was reducing the number of welded pieces that make up Orion’s pressure vessel. The pressure vessel’s original design had 33 welded pieces, which was streamlined to seven for Artemis I and up, to improve manufacturability and save more than 700 pounds of excess weight.

With these seven welds recently completed on the Artemis III pressure vessel at NASA’s Michoud Assembly Facility in New Orleans — and structural design changes and testing complete — a more efficient and streamlined production line for spacecraft begins. Under the Orion Production and Operations Contract (OPOC) awarded to Lockheed Martin, NASA committed to ordering a minimum of six and a maximum of 12 Orion spacecraft. The agency ordered three Orion spacecraft in 2019 for Artemis missions III through V, and plans to order three additional Orion capsules in fiscal year 2022 for Artemis missions VI through VIII.

“Our strategy to go from design and development to production focuses on optimization by making changes in several different areas to emerge with a more efficient flow,” said Kelly DeFazio, program director for production operations at Lockheed Martin.

Some examples of optimizing Orion production include:

Those savings give NASA more resources to invest in developing the elements needed to pursue the lunar exploration campaign in the coming years, he added.

“The transition into production provides the opportunity to shift the focus of the Orion workforce to defining, implementing, and executing the exploration missions that Orion is built to fly,” said Marshall.