For the first time ever, astronomers have directly detected light from behind a supermassive black hole. The discovery proves Albert Einstein's theory of general relativity was right — again.

Using the European Space Agency's XMM-Newton and NASA's NuSTAR space telescopes, researchers were observing the black hole as it flung X-rays out into the universe. The black hole is about 10 million times more massive than our sun, and is located in the center of a nearby spiral galaxy called I Zwicky, 1,800 million light-years away from Earth.

After observing a series of bright flares of X-rays, something unprecedented occurred — more flashes that were smaller, later and different "colors" than their predecessors. According to a study published this week in the journal Nature, the "echoes" of light appeared consistent with X-rays reflected from behind the black hole — a very strange place for light to originate.

Black holes' gravitational pulls are so powerful that light cannot escape them. However, light can "echo," wrapping around the back of the celestial phenomenon and allowing astronomers to see it.

"Any light that goes into that black hole doesn't come out, so we shouldn't be able to see anything that's behind the black hole," said lead author Dan Wilkins in a statement. "The reason we can see that is because that black hole is warping space, bending light and twisting magnetic fields around itself."

While Einstein predicted the ability of a black hole's gravity to bend light around it in 1916, it has never been confirmed — until now. 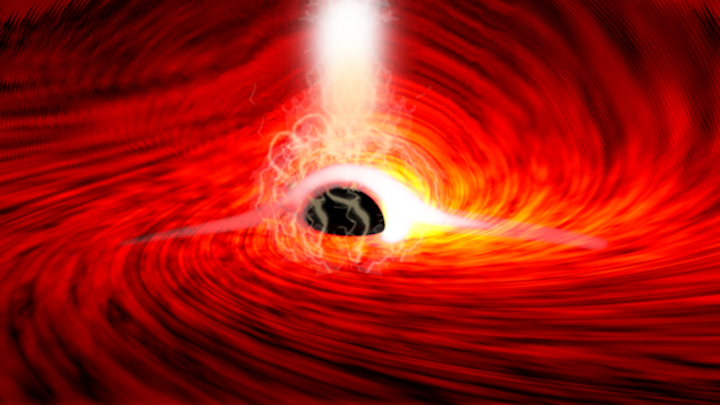 Researchers observed bright flares of X-ray emissions, produced as gas falls into a supermassive black hole. The flares echoed off of the gas falling into the black hole, and as the flares were subsiding, short flashes of X-rays were seen – corresponding to the reflection of the flares from the far side of the disk, bent around the black hole by its strong gravitational field.DAN WILKINS

"Fifty years ago, when astrophysicists starting speculating about how the magnetic field might behave close to a black hole, they had no idea that one day we might have the techniques to observe this directly and see Einstein's general theory of relativity in action," said co-author Roger Blandford.

Researchers weren't even looking to confirm Einstein's theory. They were originally attempting to uncover the mysteries of an odd feature of black holes known as the corona, the source of the bright X-ray light.

"I've been building theoretical predictions of how these echoes appear to us for a few years," said Wilkins. "I'd already seen them in the theory I've been developing, so once I saw them in the telescope observations, I could figure out the connection."

The prevailing theory is that the corona forms after gas falls continuously into the black hole, forming a spinning disk around it, "like water flushing down a drain." The gas disk is then heated up to millions of degrees, generating a twisted magnetic field that eventually snaps, releasing its energy and producing the corona.

"This magnetic field getting tied up and then snapping close to the black hole heats everything around it and produces these high energy electrons that then go on to produce the X-rays," said Wilkins.

From here, astronomers hope to use the various "colors" observed as the X-ray echoes travel around the black hole to create a 3D map of the black hole surroundings. They also hope to learn how the corona produces such bright flares.
Quelle: CBS News
Astronomie - Astronomers spot light from behind a black hole for the first time — proving Einstein right, again
« Zum vorherigen Eintrag Zum nächsten Eintrag »
143 Views
Created with page4