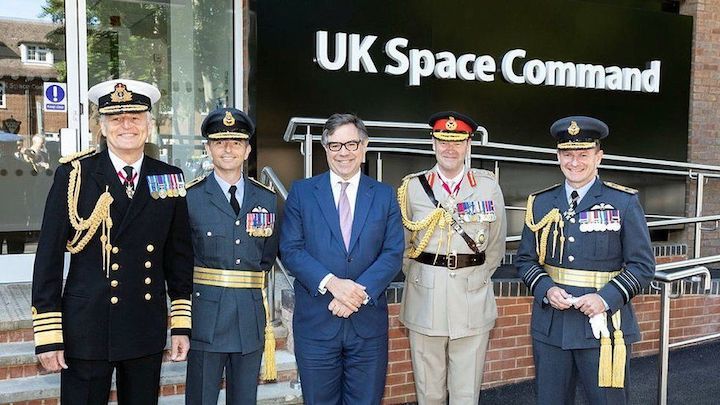 The UK military has launched its first command centre aimed at protecting the country's interests in space.

Space Command, at RAF High Wycombe, will help the UK maintain a "battle-winning advantage" in this increasingly important domain, the government says.

The UK is spending an additional £1.4bn on space capabilities over the next 10 years.

It comes as a senior UK military commander criticised China and Russia for "reckless" behaviour in space.

Air Chief Marshal Sir Mike Wigston, the head of the Royal Air Force, told Sky News: "Right now we see countries like Russia and China testing and demonstrating anti-satellite weapons - satellites with all the characteristics of a weapon deployed in space.

"We see them rehearsing, manoeuvring, which frankly have only one purpose which is to destroy satellites, so that is a real concern to us and that's behaviour that we would want the international community to call out."

He was speaking after presenting the first eight Space Command personnel with new Space Operator badges, at the opening ceremony on Thursday.

Six members of the RAF received the badge, as well as a British Army officer, and an exchange officer from the United States.

The UK says it has no plans to launch its own space weapons - and will use the new command centre to better track threats. It will be jointly operated by the Army, RAF and Royal Navy.

When at full operating capability, it will also provide command and control for all of the UK's space capabilities, including the UK's Space Operations Centre, RAF Fylingdales, SKYNET and others.

Defence Minister Jeremy Quin said: "As our adversaries advance their space capabilities, it is vital we invest in space to ensure we maintain a battle-winning advantage across this fast-evolving operational domain.

"The stand-up of Space Command is an exciting and important step in our commitment to operate in space effectively."

It comes as major military powers around the world are increasing their presence and power in space.

In 2019, former president Donald Trump launched the US "Space Force" arguing that "space is the world's new war-fighting domain," and that maintaining American superiority over Russia and China was "absolutely vital".

The UK is spending an additional £1.4bn on space capabilities over the next 10 years arguing that "the threat from our adversaries has been evolving" since the Cold War.

Despite the increase in spending, the government says it intends to have fewer soldiers by 2025.

"We've seen reductions in forces all over Europe as requirements for expeditionary responses have changed," Fenella McGerty, from the International Institute for Strategic Studies (IISS) told BBC News in March.

She added that it would enable the government to put a higher proportion of defence spending towards things like technology and research and development.

Labour has previously questioned how additional increases in defence spending are being funded.

It’s great to be here and I was delighted to have the privilege of cutting the ribbon which formally and officially stands up our Space Command.

And it’s not a moment too soon. Space is in the news like never before.

As scientists test the limit of our abilities to conduct space travel and billionaire entrepreneurs explore the commercial potential of space tourism, our competitors are trying to assert their dominance by recklessly testing anti-satellite missiles.

And this is why our dependence on space has never been greater. Satellite constellations in low-earth orbit link up almost every aspect of our daily lives, from mobile phones, the internet and television to transport networks, and even banking systems.

Militarily, our Skynet satellite system is critical for communication and reconnaissance, weather tracking and navigation.

But with dependency comes vulnerability.

That’s why in our recent Integrated Review we recognise space as a major strategic challenge.

And that’s also why our Defence Command Paper set out our determination to invest in space capabilities over the coming years, backed by around £1.4bn funding on top of the £5bn already being invested in Skynet.

We’re using that money to set up a National Space Operations Centre, so that we can track activity and ensure our awareness.

And we’re developing a UK-built Intelligence, Surveillance and Reconnaissance satellite constellation.
We’ll shortly be handing out our first ever space badges to these pioneers.

But the key part of the plan is our Space Command. It will allow us to do three things:

First, it will strengthen the military’s command in space, helping to coordinate commercial space operations and leading to the development of new space-based capabilities.

Second, as a corollary of that, it will open up exciting new opportunities for industry.

Our nation has bold space ambitions that will require the most imaginative and innovative companies to come forward with cutting-edge solutions; solutions that enhance our reputation as a science superpower.

Third, this Command will help us bolster our bonds with key partners like Australia, France and, especially, the US.

I know they are acutely aware that, at a time when there is limited international agreement on how to regulate satellites and a lack of clarity on international standards to encourage their use, we have a joint responsibility to safeguard the space commons.

That means properly understanding this complex domain, protecting our whole space enterprise – be that on Earth or in orbit - and stopping our upper atmosphere becoming a cosmic junkyard.

In the coming months, we’ll be publishing a Space Strategy and alongside that will be a Defence Space Strategy, with both setting out our plans in more precise detail.

But, before I hand over, perhaps there is another aspect to what we’re doing in the space domain.

It is now 30 years since Helen Sharman became the first British person to go into space.

After 18 months of intensive training, the then 27-year-old embarked on an eight-day mission to the Mir satellite.
She inspired a generation, in the same way Tim Peake is doing so today.

And so, I hope Space Command’s work will have a similarly inspiring effect of the next generation.

Filling them not just with a sense of wonder and majesty for our universe but a sense of the boundless possibilities for their future, because the sky is literally no longer the limit.

And the dawn of a new space age starts here.