The first science from the eROSITA space observatory is here. 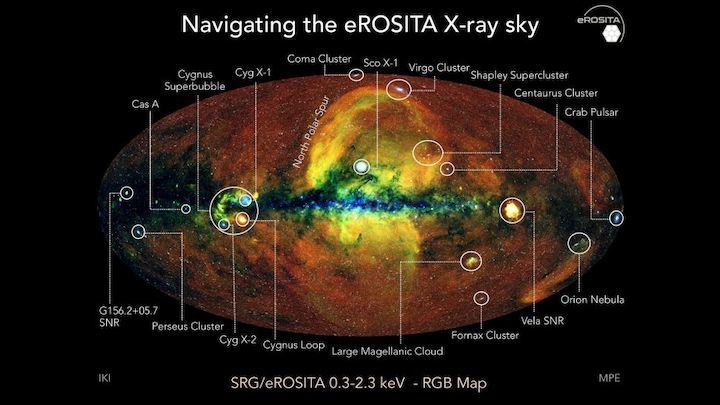 A German-built space telescope is creating the most detailed map of black holesand neutron stars across our universe, revealing more than 3 million newfound objects in less than two years.

The observatory, called eROSITA, launched in 2019 and is the first space-based X-ray telescope capable of imaging the entire sky. It is the main instrument aboard the Russian-German Spectrum-Roentgen-Gamma mission, which sits in a region known as  Lagrange point 2, one of five stable points around the sun-Earth system, where the gravitational forces of the two bodies are in balance. From this vantage point, eROSITA has a clear view of the universe, which it photographs with its powerful X-ray detecting instruments.

Last month, the team behind eROSITA, led by scientists from the Max Planck Institute for Extraterrestrial Physics in Germany, released the first batch of dataacquired by the instrument to the wider scientific community for exploration.

Imaging the whole sky in X-rays for the first time

The telescope has already led to interesting discoveries, including that of giant X-ray bubbles emanating from the center of the Milky Way. With its first public science release, eROSITA is poised to shed light on some long-standing cosmological mysteries including the distribution of the elusive dark energy in the universe, the mission's senior scientist Andrea Merloni told Space.com.

"For the first time, we have an X-ray telescope that can be used in very similar ways as the large field optical telescopes that we use today," Merloni said. "With eROSITA, we cover the entire sky very efficiently and can study large-scale structures, such as the entire Milky Way."

All-sky surveys, such as the European Space Agency's Gaia mission or the ground-based Very Large Telescope of the European Southern Observatory, image vast areas of the sky at one sweep, allowing astronomers to understand the motions of entire populations of stars and other celestial objects. Gaia, for example, observes nearly two billions of stars in the Milky Way and measures their positions in the sky and distances from Earth with unprecedented accuracy.

However, some of the most interesting objects in the Universe don't emit light at visible wavelengths and remain therefore mostly hidden to optical telescopes. That includes black holes and neutron stars. But also distant galaxy clusters, the conglomerations of galaxies that represent the most complex structures in the Universe, are more easily observed in X-rays.

Previous X-rays telescopes, however, such as ESA's XMM Newton, or NASA's Chandra X-ray Observatory, could only observe rather small sections of the sky in one go.

"The X-ray telescopes so far have been able to look very deep into the centre to observe the early Universe," Merloni said. "But it has always been very difficult to compile large populations [of black holes, neutron stars and clusters] and create a large catalogue that you could then use to study their cosmological evolution."

The eROSITA telescope reuses a lot of the technology originally developed for ESA's veteran XMM Newton, which has been orbiting Earth since 1999. The technical adjustments made by the Max Planck Institute team and their collaborators enable the new telescope to produce images of the same quality as XMM-Newton but over a much larger field of view, Merloni said. 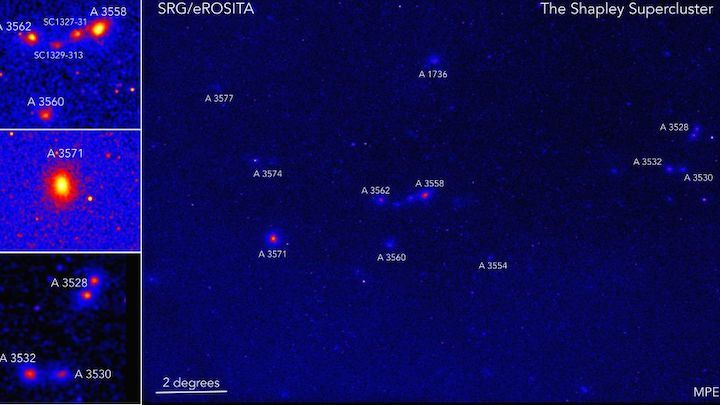 eRosita detects the bright X-ray glow emitted by hot gas in galaxy clusters, which are the most complex structures in the universe. (Image credit: Esra Bulbul, Jeremy Sanders (MPE))

The map of black holes in the universe

eROSITA started taking the first images in October 2019. Since then, it has completed three all sky surveys, maps of the sky reflecting the distribution of sources of X-ray radiation in the universe, Merloni said.

"In the 50 years of X-ray astronomy until eROSITA, in total, if you sum all the [X-ray] sources discovered by all the missions, there were about a million," Merloni said. "We have already discovered three times more than what was known before, although some of it still has to be validated."

Most of the previously known objects were concentrated in pockets, Merloni added, because Chandra and XMM-Newton are very good at diving deep into small sections of the universe. The new black holes, clusters and neutron stars detected by eROSITA are, on the other hand, distributed evenly all over the sky.

Just as Gaia enabled scientists to move from studying individual stars to visualising the motions and dynamics inside the galaxy (and making leaps in the understanding of its evolution), eROSITA,  too, is expected to open entirely new possibilities.

How clusters turn from 'villages' to 'cities'

Merloni is especially excited about what eROSITA might reveal about the evolution of galaxy clusters, large groupings of hundreds to thousands of galaxies held together by gravity. Clusters, a product of galaxy collisions, started to emerge some 10 billion years ago and have been growing steadily over the billions of years from small "villages" to "megacities".

eROSITA, with its ability to see objects so distant that their light required 7 billion years to reach its detectors, will enable astronomers to reconstruct the evolution of these massive structures throughout the ages.

"Clusters can be seen without X-ray telescopes but it could be difficult to disentangle them from the rest of the galaxy population," Merloni said. "What we see in X-rays is the gas between the galaxies in the cluster that gets very hot and emits this X-ray glow. In eROSITA images, it's actually very easy to distinguish these clusters because of the way they shine."

Through studying clusters at various distances (and therefore of various ages), astronomers will be able to create a timeline of cluster evolution and shed light on the process that drives this evolution.

"By discovering a large number of clusters, you can understand whether the gradual conglomeration of galaxies happened faster or slower," Merloni said. "By understanding this we can understand something about the density of dark matter and dark energy, which dictates how fast or slow these clusters form."

While dark matter is believed to be responsible for the majority of the gravitational force in the universe, dark energy is the elusive repulsive force that counteracts gravity, which has so far not been directly observed or measured.

The eROSITA measurements, however, will have to be combined with data from other observatories, including Gaia and some of the ground-based large-scale surveys, such as the Sloan Digital Sky Survey and the upcoming Vera Rubin observatory, to gain the most accurate information about where exactly the clusters are located.

"With accurate data on these clusters, we will be able to put some constraints on the dark energy equation and give our contribution to this big enterprise of cosmological analysis," Merloni added.

The first public eROSITA data release, unveiled in June at the 2021 meeting of the European Astronomical Society, contained data gathered during the first two months of eROSITA's operations. It represents only the first step in this endeavor. The mission will complete its main science task in 2023, but the astronomers hope it will remain operational for many more years. Either way, the catalogues of X-ray emitting objects in our universe will keep scientists busy for decades to come, Merloni said.

"The previous X-ray all sky survey mission was [the German satellite] Rosat," said Merloni. "It did only one all sky survey in 1990, which was maybe a factor of 10 less deep and less accurate than ours. But people kept publishing papers based on that even now, after more than 30 years."