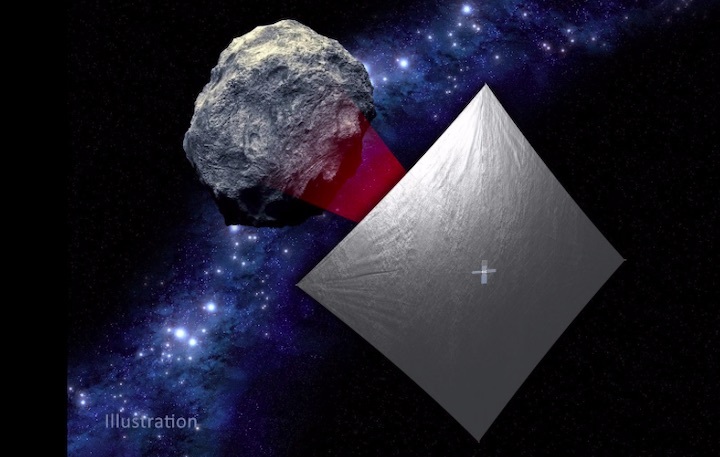 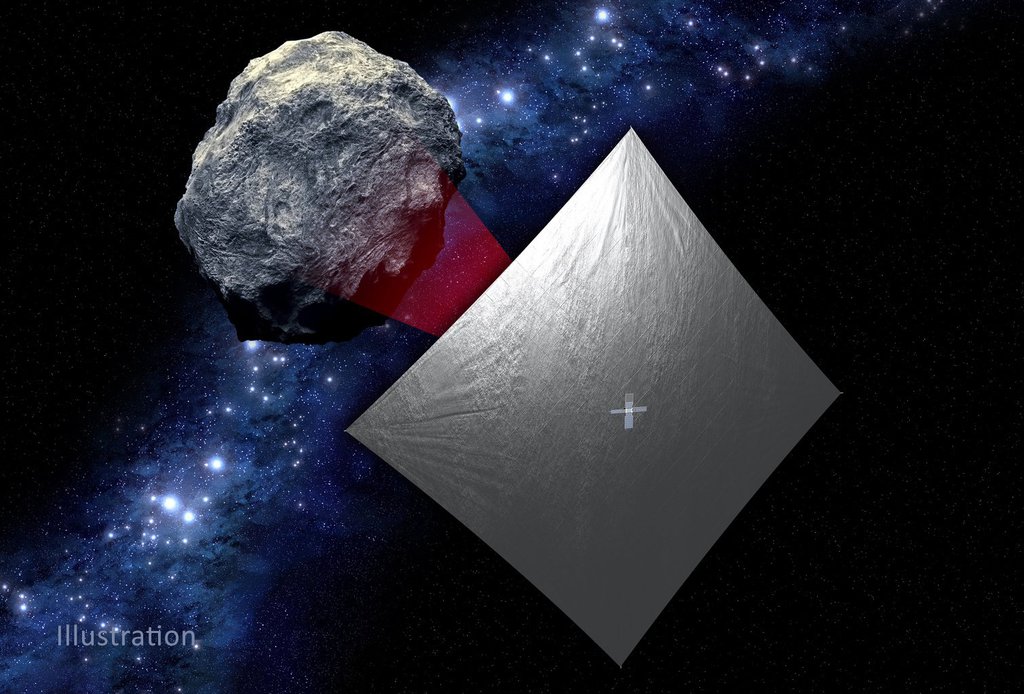 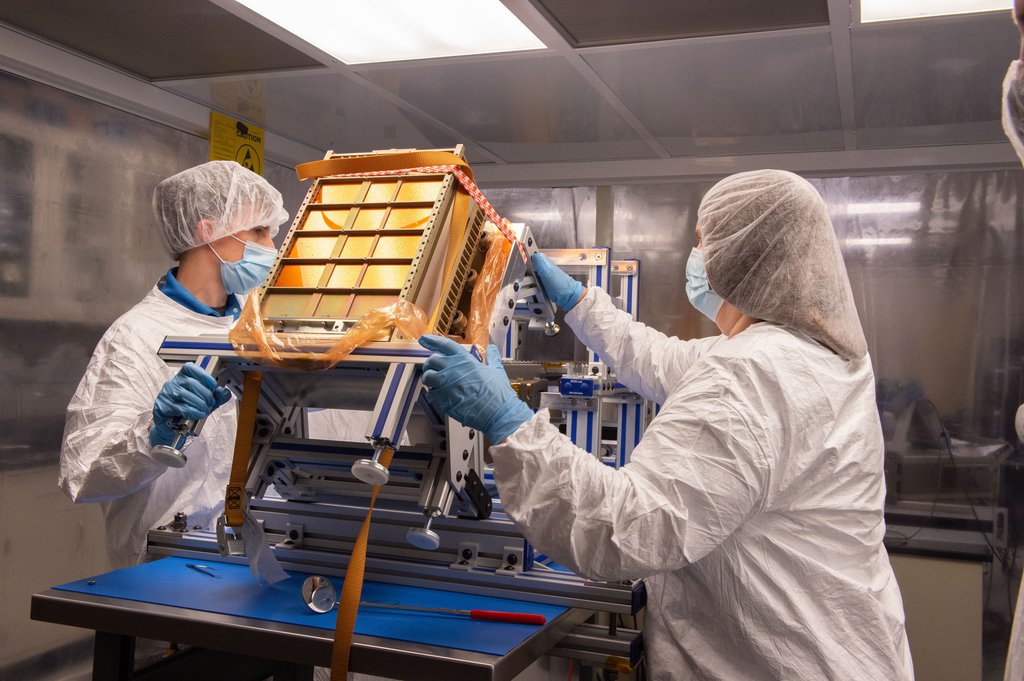 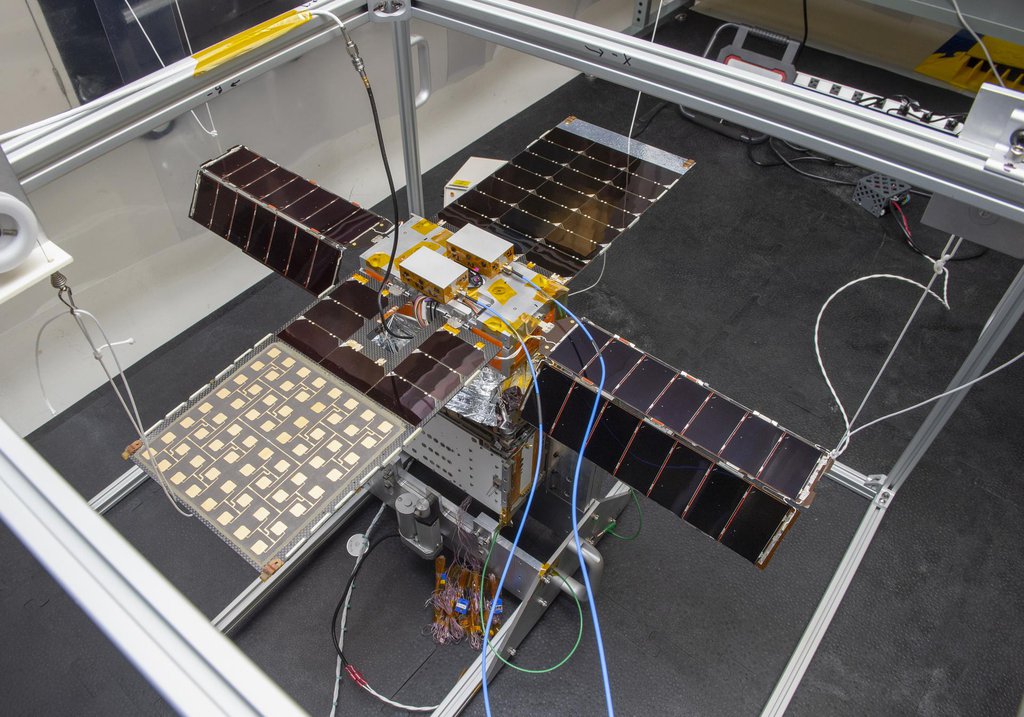 Illustration of NASA’s NEA Scout with the solar sail deployed as it flies by its asteroid destination.

Sailing on sunlight, NEA Scout will capture images of an asteroid for scientific study.

NASA’s Near-Earth Asteroid Scout is tucked away safely inside the agency’s powerful Space Launch System (SLS) rocket at NASA’s Kennedy Space Center in Florida. The solar sailing CubeSat is one of several secondary payloads hitching a ride on Artemis I, the first integrated flight of the agency’s SLS and the Orion spacecraft.

NEA Scout, a small spacecraft roughly the size of a large shoebox, has been packaged into a dispenser and attached to the adapter ring that connects the SLS rocket and Orion spacecraft. The Artemis I mission will be an uncrewed flight test. It also offers deep space transportation for several CubeSats, enabling opportunities for small spacecraft like NEA Scout to reach the Moon and beyond as part of the Artemisprogram.

“NEA Scout will be America’s first interplanetary mission using solar sail propulsion,” said Les Johnson, principal technology investigator for the mission at NASA’s Marshall Space Flight Center. “There have been several sail tests in Earth orbit, and we are now ready to show we can use this new type of spacecraft propulsion to go new places and perform important science.”

The CubeSat will use stainless steel alloy booms to deploy an aluminum-coated plastic film sail – thinner than a human hair and about the size of a racquetball court. The large-area sail will generate thrust by reflecting sunlight. Energetic particles of sunlight, called photons, bounce off the solar sail to give it a gentle yet constant push. Over time, this constant thrust can accelerate the spacecraft to very high speeds, allowing it to navigate through space and catch up to its target asteroid.

NEA Scout is also a stepping-stone to another recently selectedNASA solar sail mission, Solar Cruiser, which will use a sail 16 times larger when it flies in 2025.

Sailing on sunlight, NEA Scout will begin an approximate two-year journey to fly by a near-Earth asteroid. Once it reaches its destination, the spacecraft will use a science-grade camera to capture images of the asteroid – down to less than four inches (10 centimeters) per pixel – which scientists will then study to further our understanding of these small but important solar system neighbors. High-resolution imaging is made possible thanks to the low-velocity flyby (less than 100 feet, or 30 meters, per second) enabled by the solar sail.

The data obtained will help scientists understand a smaller class of asteroids – those measuring less than 100 meters (330 feet) across – that have never been explored by spacecraft.

“The images gathered by NEA Scout will provide critical information on the asteroid’s physical properties such as orbit, shape, volume, rotation, the dust and debris field surrounding it, plus its surface properties,” said Julie Castillo-Rogez, the mission’s principal science investigator at NASA’s Jet Propulsion Laboratory.

“Despite their size, some of these small asteroids could pose a threat to Earth,” Dr. Jim Stott, NEA Scout technology project manager, said. “Understanding their properties could help us develop strategies for reducing the potential damage caused in the event of an impact.”

Scientists will use this data to determine what is required to reduce risk, increase effectiveness, and improve the design and operations of robotic and human space exploration, added Castillo-Rogez.

NEA Scout is developed under NASA’s Advanced Exploration Systems division. The CubeSat is designed and developed by NASA Marshall in Huntsville, Alabama, and JPL in Southern California.