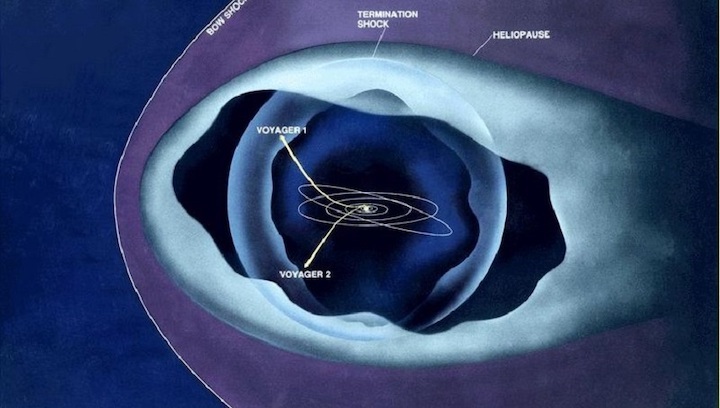 The most far-travelled thing humans have ever made, Voyager 1 is still transmitting trinkets of information to Earth. A team of US researchers has used this data to spot a plasma hum from the thin gas that occupies the space between stars.

“Voyager is sending back detail,” says Shami Chatterjee, a researcher at Cornell University, US, and author on a paper describing the research, published in Nature Astronomy.

Voyager 1 crossed the heliopause – the outer edge of the heliosphere – in 2012, entering the interstellar medium. This plasma that exists in the space between stars is fully ionised gas, which the Sun oscillates, creating clear ‘plasma waves’. Voyager 1 is fitted with a detector for these waves, so it can collect data on the waves and send it 22 billion kilometres back to Earth.

But between the solar noise that Voyager 1 sends back, this team of researchers has identified a persistent hum from plasma waves that don’t come from the Sun – it is generated by the interstellar gas around the craft, instead.

“It’s very faint and monotone, because it is in a narrow frequency bandwidth,” says Stella Koch Ocker, a doctoral student in astronomy at Cornell and lead author on the paper. “We’re detecting the faint, persistent hum of interstellar gas.”

Ocker adds that this means the interstellar gas might be more active than scientists previously thought, as the gentle plasma hum Voyager 1 hears is fairly consistant behind bigger signals.

“The interstellar medium is like a quiet or gentle rain,” says senior author James Cordes, professor of astronomy at Cornell. “In the case of a solar outburst, it’s like detecting a lightning burst in a thunderstorm and then it’s back to a gentle rain.”

In the emptiness of space, Voyager 1 detects plasma ‘hum’ 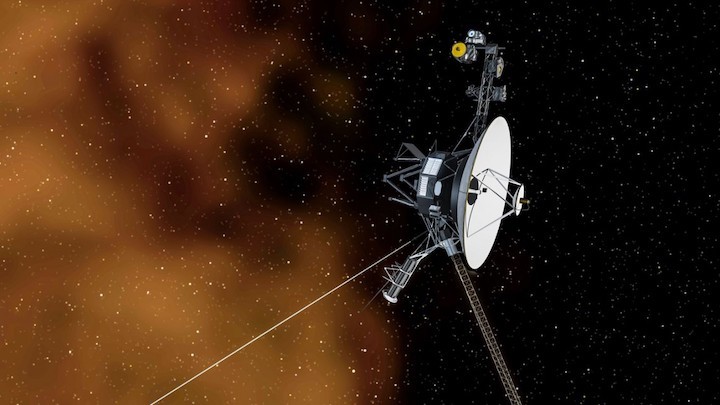 Voyager 1 – one of two sibling NASA spacecraft launched 44 years ago and now the most distant human-made object in space – still works and zooms toward infinity.

As the craft toils, it has long since zipped past the edge of the solar system through the heliopause – the solar system’s border with interstellar space – into the interstellar medium. Now, its instruments have detected the constant drone of interstellar gas (plasma waves), according to Cornell-led research published May 10 in Nature Astronomy.

Examining data slowly sent back from more than 14 billion miles away, Stella Koch Ocker, a Cornell doctoral student in astronomy, has uncovered the emission. “It’s very faint and monotone, because it is in a narrow frequency bandwidth,” Ocker said. “We’re detecting the faint, persistent hum of interstellar gas.”

After entering interstellar space, the spacecraft’s Plasma Wave System detected perturbations in the gas. But, in between those eruptions – caused by our own roiling sun – researchers have uncovered a steady, persistent signature produced by the tenuous near-vacuum of space.

”The interstellar medium is like a quiet or gentle rain,” said senior author James Cordes, the George Feldstein Professor of Astronomy (A&S). “In the case of a solar outburst, it’s like detecting a lightning burst in a thunderstorm and then it’s back to a gentle rain.”

Ocker believes there is more low-level activity in the interstellar gas than scientists had previously thought, which allows researchers to track the spatial distribution of plasma – that is, when it’s not being perturbed by solar flares.

“Scientifically, this research is quite a feat. It’s a testament to the amazing Voyager spacecraft,” Ocker said. “It’s the engineering gift to science that keeps on giving.”

In addition to Ocker, Cordes and Chatterjee, the paper, “Persistent plasma waves in interstellar space detected by Voyager 1,” was co-authored by professor emeritus Donald A. Gurnett, the principal investigator on the plasma wave system (PWS) on both Voyager spacecraft; Steven R. Spangler, professor; and research scientist William S. Kurth, co-investigator on PWS, all from the University of Iowa. 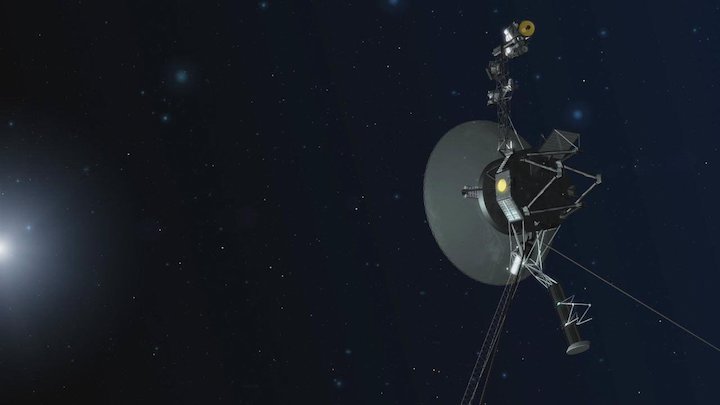 An illustration depicting one of NASA’s twin Voyager spacecraft. Both Voyagers have entered interstellar space, or the space outside our Sun’s heliosphere. Credit: NASA/JPL-Caltech

In the sparse collection of atoms that fills interstellar space, Voyager 1 has measured a long-lasting series of waves where it previously only detected sporadic bursts.

Until recently, every spacecraft in history had made all of its measurements inside our heliosphere, the magnetic bubble inflated by our Sun. But on Aug. 25, 2012, NASA’s Voyager 1changed that. As it crossed the heliosphere’s boundary, it became the first human-made object to enter – and measure – interstellar space. Now eight years into its interstellar journey, a close listen of Voyager 1’s data is yielding new insights into what that frontier is like.

If our heliosphere is a ship sailing interstellar waters, Voyager 1 is a life raft just dropped from the deck, determined to survey the currents. For now, any rough waters it feels are mostly from our heliosphere’s wake. But farther out, it will sense the stirrings from sources deeper in the cosmos. Eventually, our heliosphere’s presence will fade from its measurements completely.

“We have some ideas about how far Voyager will need to get to start seeing more pure interstellar waters, so to speak,” said Stella Ocker, a Ph.D. student at Cornell University in Ithaca, New York, and the newest member of the Voyager team. “But we’re not entirely sure when we’ll reach that point.”

When one pictures the stuff between the stars – astronomers call it the “interstellar medium,” a spread-out soup of particles and radiation – one might reimagine a calm, silent, serene environment. That would be a mistake.

“I have used the phrase ‘the quiescent interstellar medium’ – but you can find lots of places that are not particularly quiescent,” said Jim Cordes, space physicist at Cornell and co-author of the paper.

Like the ocean, the interstellar medium is full of turbulent waves. The largest come from our galaxy’s rotation, as space smears against itself and sets forth undulations tens of light-years across. Smaller (though still gigantic) waves rush from supernova blasts, stretching billions of miles from crest to crest. The smallest ripples are usually from our own Sun, as solar eruptions send shockwaves through space that permeate our heliosphere’s lining.

These crashing waves reveal clues about the density of the interstellar medium – a value that affects our understanding of the shape of our heliosphere, how stars form, and even our own location in the galaxy. As these waves reverberate through space, they vibrate the electrons around them, which ring out at characteristic frequencies depending on how crammed together they are. The higher the pitch of that ringing, the higher the electron density. Voyager 1’s Plasma Wave Subsystem – which includes two “bunny ear” antennas sticking out 30 feet (10 meters) behind the spacecraft – was designed to hear that ringing. 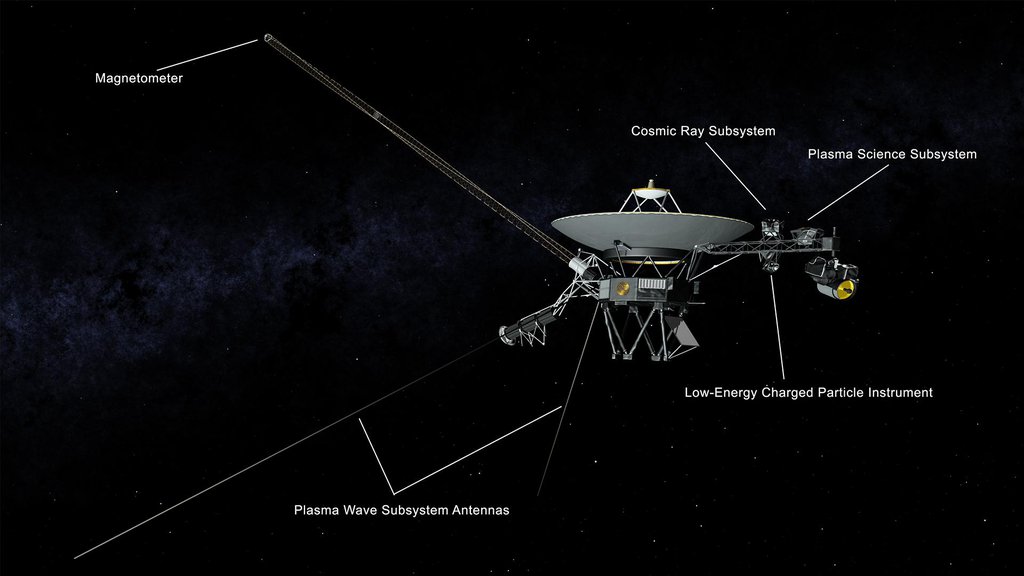 An illustration of NASA's Voyager spacecraft showing the antennas used by the Plasma Wave Subsystem and other instruments. Credit: NASA/JPL-Caltech Full Image Details

In November 2012, three months after exiting the heliosphere, Voyager 1 heard interstellar sounds for the first time. Six months later, another “whistle” appeared – this time louder and even higher pitched. The interstellar medium appeared to be getting thicker, and quickly.

NASA’s Voyager 1 spacecraft captured these sounds of interstellar space. Voyager 1’s plasma wave instrument detected the vibrations of dense interstellar plasma, or ionized gas, from October to November 2012 and April to May 2013.

These momentary whistles continue at irregular intervals in Voyager’s data today. They’re an excellent way to study the interstellar medium’s density, but it does take some patience.

“They’ve only been seen about once a year, so relying on these kind of fortuitous events meant that our map of the density of interstellar space was kind of sparse,” Ocker said.

Ocker set out to find a running measure of interstellar medium density to fill in the gaps – one that doesn’t depend on the occasional shockwaves propagating out from the Sun. After filtering through Voyager 1’s data, looking for weak but consistent signals, she found a promising candidate. It started to pick up in mid-2017, right around the time of another whistle.

“It’s virtually a single tone,” said Ocker. “And over time, we do hear it change – but the way the frequency moves around tells us how the density is changing.” 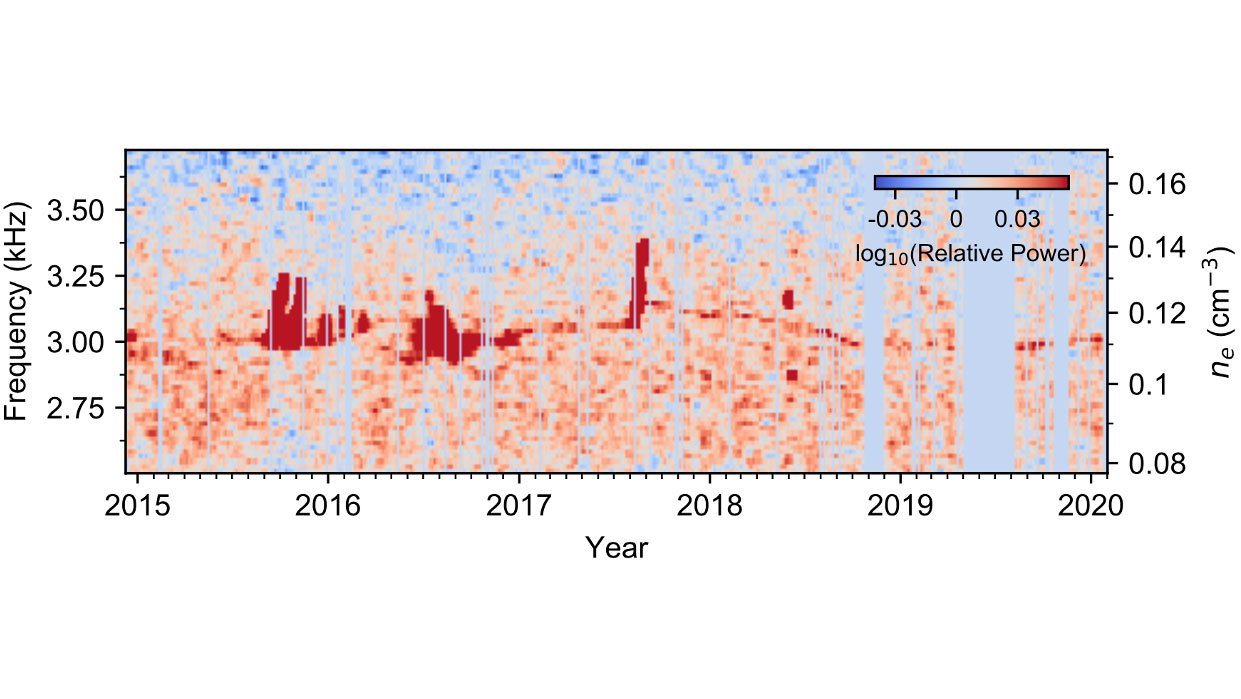 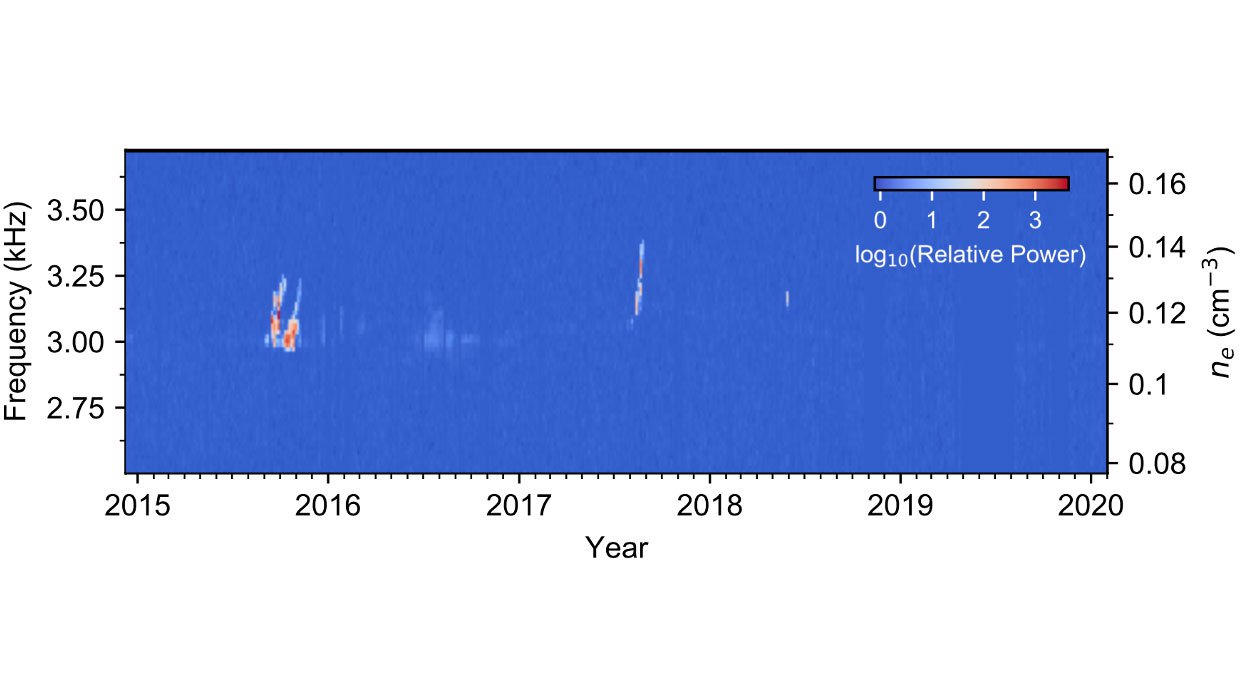 Ocker calls the new signal a plasma wave emission, and it, too, appeared to track the density of interstellar space. When the abrupt whistles appeared in the data, the tone of the emission rises and falls with them. The signal also resembles one observed in Earth’s upper atmosphere that’s known to track with the electron density there.

“This is really exciting, because we are able to regularly sample the density over a very long stretch of space, the longest stretch of space that we have so far,” said Ocker. “This provides us with the most complete map of the density and the interstellar medium as seen by Voyager.”