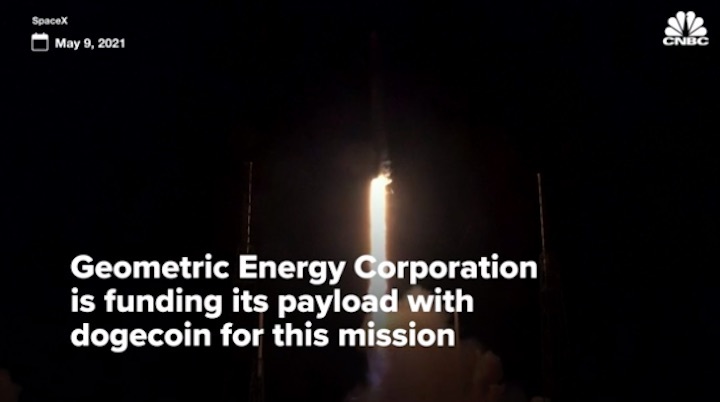 Elon Musk’s SpaceX will launch the “DOGE-1 Mission to the Moon” in the first quarter of 2022, with the company accepting the meme-inspired cryptocurrency as full payment for the lunar payload.

Geometric Energy Corporation announced the dogecoin-funded mission on Sunday, which SpaceX’s communications team confirmed in an email to reporters. The mission’s financial value was not disclosed.

DOGE-1 will fly a 40 kilogram cube satellite as a payload on a Falcon 9 rocket, with Geometric Energy Corporation saying its payload “will obtain lunar-spatial intelligence from sensors and cameras on-board with integrated communications and computational systems.”

SpaceX vice president of commercial sales Tom Ochinero said in a statement that DOGE-1 “will demonstrate the application of cryptocurrency beyond Earth orbit and set the foundation for interplanetary commerce.”

“We’re excited to launch DOGE-1 to the Moon!” Ochinero said.

A Falcon 9 rocket launches the Transporter-1 mission in January 2021.
SpaceX

Musk previously announced the company’s plans, albeit in a tweet on April Fool’s Day.

“SpaceX is going to put a literal Dogecoin on the literal moon,” Musk wrote.

The DOGE-1 mission comes after Musk, the self-proclaimed “Dogefather,” made his debut as host of “Saturday Night Live.” The price of dogecoin plunged during his appearance, falling below 50 cents, despite his references to the cryptocurrency.

For SpaceX, the announcement also comes on the day the company set a new record for its Falcon 9 series of rockets. After launching another batch of Starlink satellites into orbit, SpaceX landed the Falcon 9 rocket’s booster for a 10th time — a benchmark Musk has previously described as key in the company’s progress of reusing its rockets.

“It’s designed to do 10 or more flights with no refurbishment between each flight,” Musk told reporters in May 2018.

“We believe that the [Falcon 9] boosters are capable of on the order of at least 100 flights before being retired. Maybe more.”